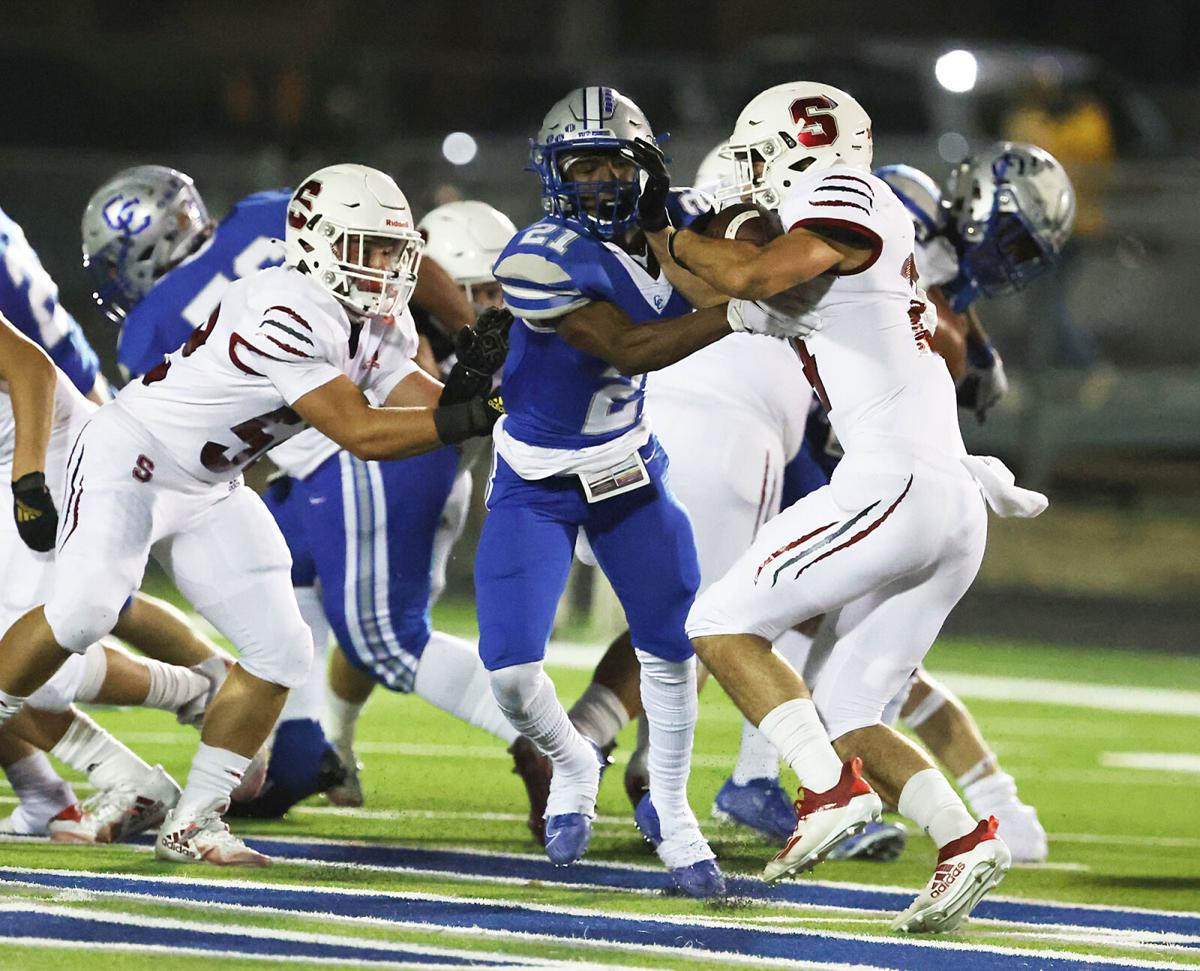 Connally’s Izaiah Stephens (left) grabs hold of Salado’s Wrook Brown (right) on a tackle attempt in the first half. 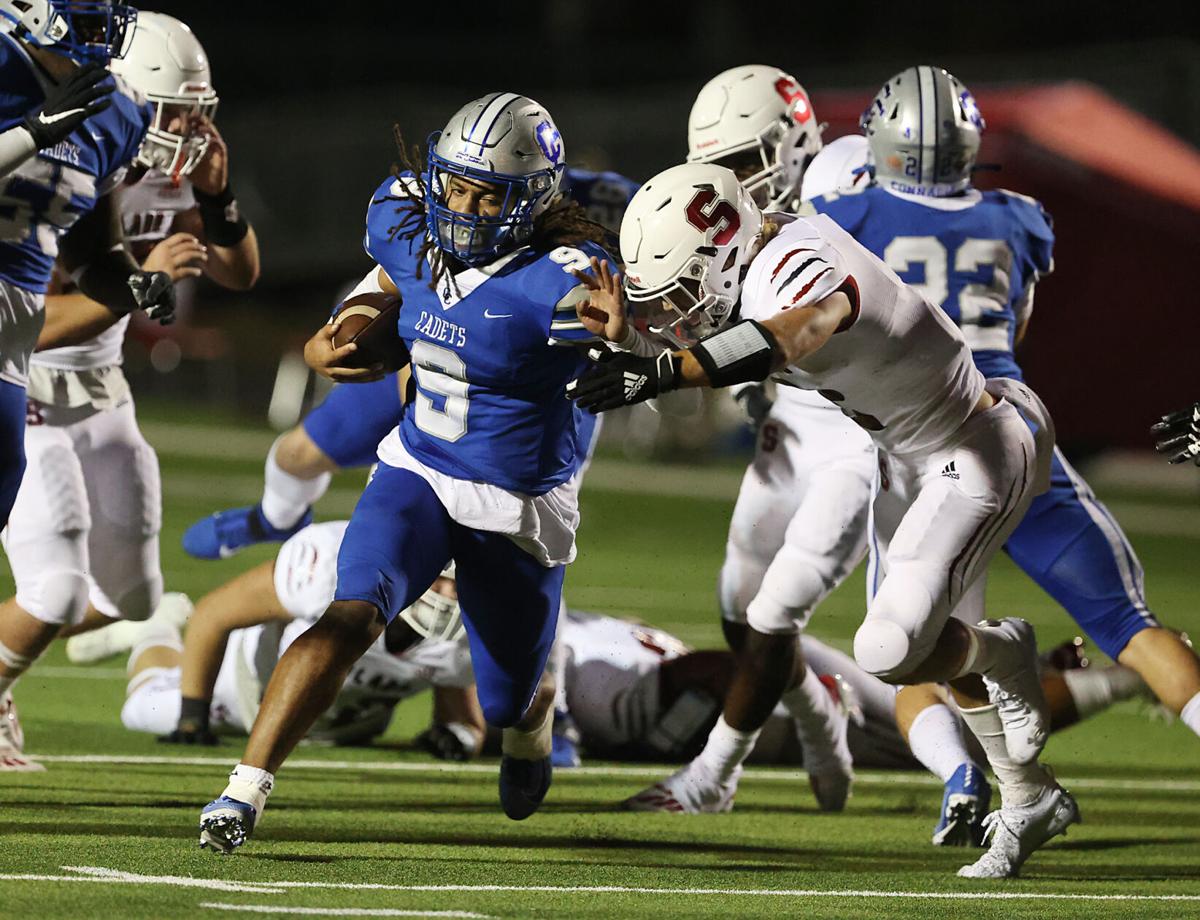 Connally's Kavian Gaither (left) gets pulled down by Salado's Wrook Brown (right) in the first half. 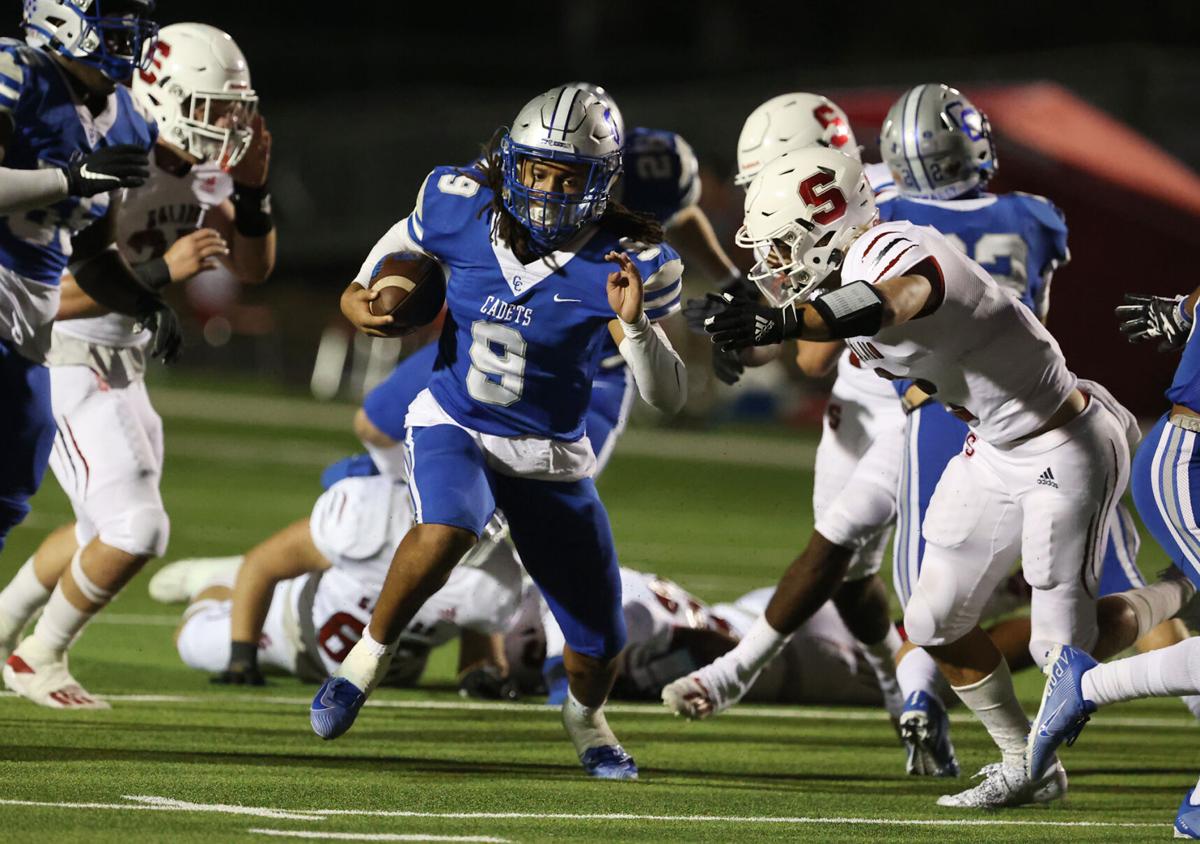 Connally’s Kavian Gaither (left) gets pulled down by Salado’s Wrook Brown (right) in the first half. 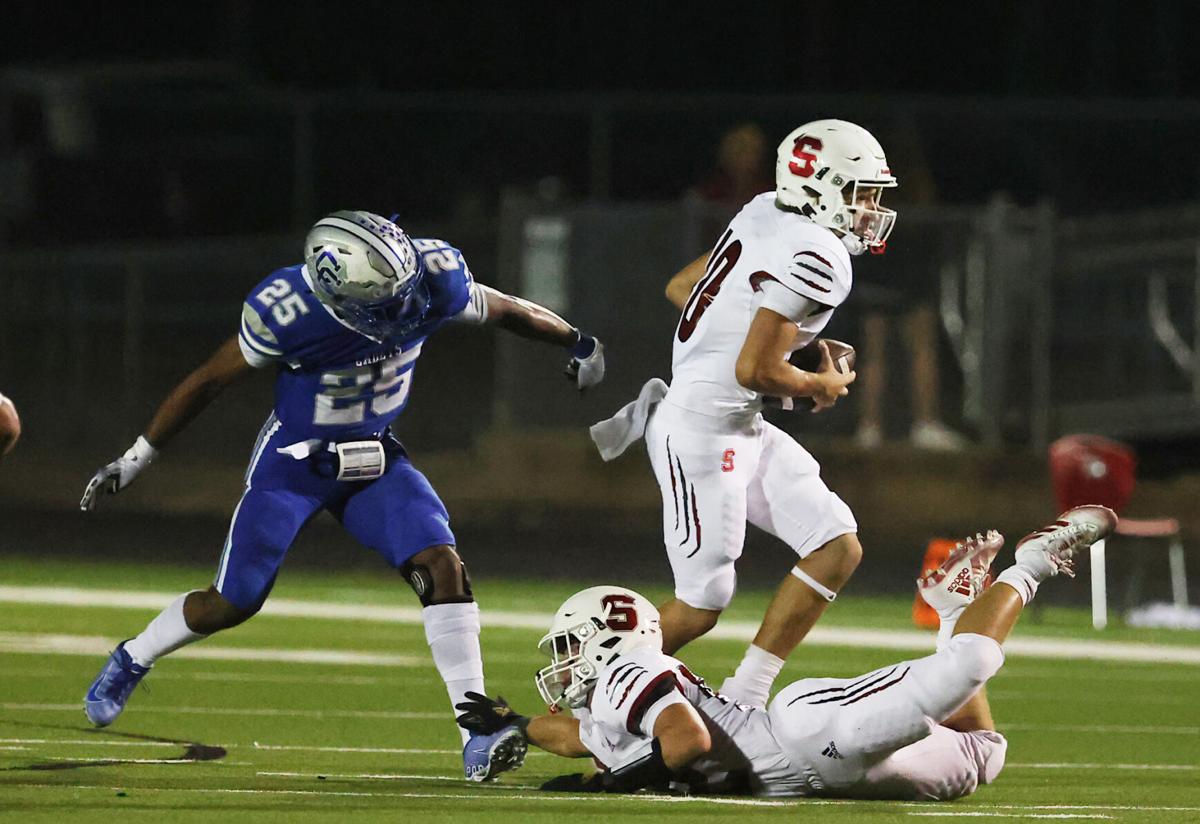 Salado quarterback Hutton Haire (right) is pressured by Connally's Ashton Brooks-Williams (left) in the first half. 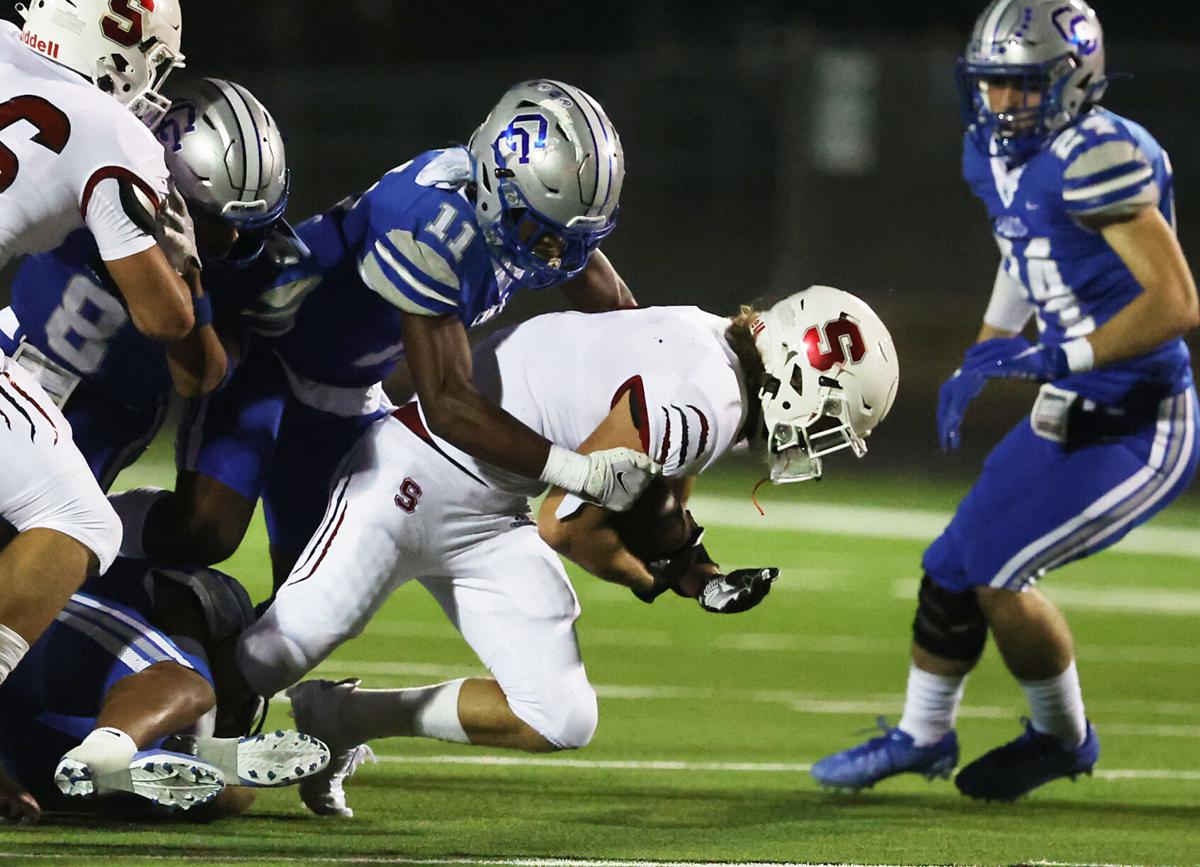 Connally's LaMarcus McDonald (left) pulls down Salado's Wrook Brown for a short gain in the first half.

With Noah Mescher rushing for 136 yards and two touchdowns, the Eagles did just enough to gut out a 20-15 win over Connally in a physical District 9-4A Division II game Friday night.

But the Eagles (7-1, 2-0) made more clutch offensive plays along with some momentum-turning defensive stops to pull out a big road win.

“They did what I thought they were going to do,” said Connally coach Shane Anderson. “They controlled the clock and ran the ball. They made some clutch plays in long yardage situations and that’s kind of out of their element. You tip your hat to (Salado coach) Alan Haire and his kids tonight.”

After grabbing a 7-3 halftime lead, the Eagles drove 65 yards after taking the second half kickoff with Mescher finishing it off with a four-yard scoring run.

Gaither responded with a three-yard touchdown run to cut Salado’s lead to 14-9 with 2:48 left in the third quarter.

But Wrook Brown broke loose for a 36-yard scoring run as Salado grabbed a 20-9 lead with 1:19 remaining in the third quarter.

The Cadets answered with a drive to Salado’s 1-yard line, but the Eagles put up a huge goal line stand as they stopped Gaither on third and fourth down to open the fourth quarter.

The Cadets weren’t finished as Gaither busted loose for a 17-yard touchdown run to cut Salado’s lead to 20-15 with 3:11 remaining.

But Salado picked up a first down and ran out the clock to finish off the win.

“You’ve got to give credit to our defense,” Anderson said. “You hold somebody to 20 points in District 9-4A you ought to win the football game. We’ve got to get better offensively.”

The Cadets took the opening kickoff and drove 49 yards before Ralph Morales nailed a 33-yard field goal for a 3-0 lead with 6:06 left in the first quarter.

With Gaither taking most of the carries, the Cadets drove to the 9-yard line. Gaither pounded up the middle for a touchdown, but the Cadets were called for holding and had to settle for the field goal.

The Eagles responded with a drive to Connally’s 20 before Izaiah Stephens nailed quarterback Hutton Haire for a three-yard loss. On the next play, Haire hit Mescher for a 23-yard touchdown pass, but the Eagles were nailed with a holding penalty.

Facing fourth-and-20 at the 33, Connally’s Ashton Brooks-Williams delivered a fierce pass rush and forced Haire into a bad throw to end the threat.

But on their next possession, the Eagles drove 75 yards for a touchdown with Mescher finishing it off with a four-yard drive up the middle as Salado grabbed a 7-3 lead with 1:22 left in the second quarter.

Mescher did most of the heavy lifting on the drive. His 26-yard blast up the middle on third-and-one put the Eagles in Connally territory at the 40.

Connally appeared to have the Eagles stopped when Haire missed a third-and-nine pass at the 27, but a facemask call against the Cadets gave the Eagles a first down.

DALLAS — West coach David Woodard was confident that his team would bounce back from last week’s loss to Grandview, and he was right.

Connally’s Izaiah Stephens (left) grabs hold of Salado’s Wrook Brown (right) on a tackle attempt in the first half.

Connally's Kavian Gaither (left) gets pulled down by Salado's Wrook Brown (right) in the first half.

Connally’s Kavian Gaither (left) gets pulled down by Salado’s Wrook Brown (right) in the first half.

Salado quarterback Hutton Haire (right) is pressured by Connally's Ashton Brooks-Williams (left) in the first half.

Connally's LaMarcus McDonald (left) pulls down Salado's Wrook Brown for a short gain in the first half.