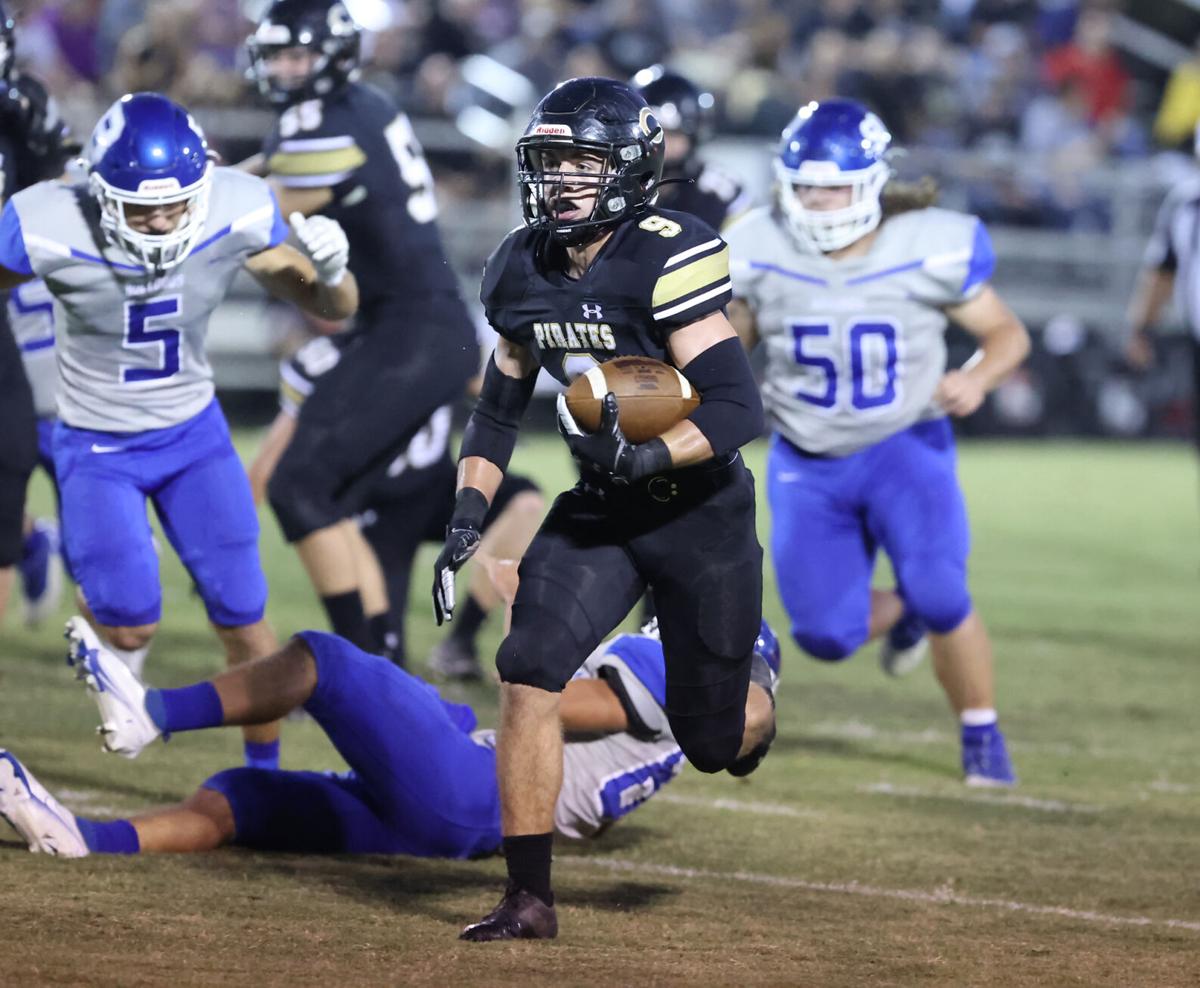 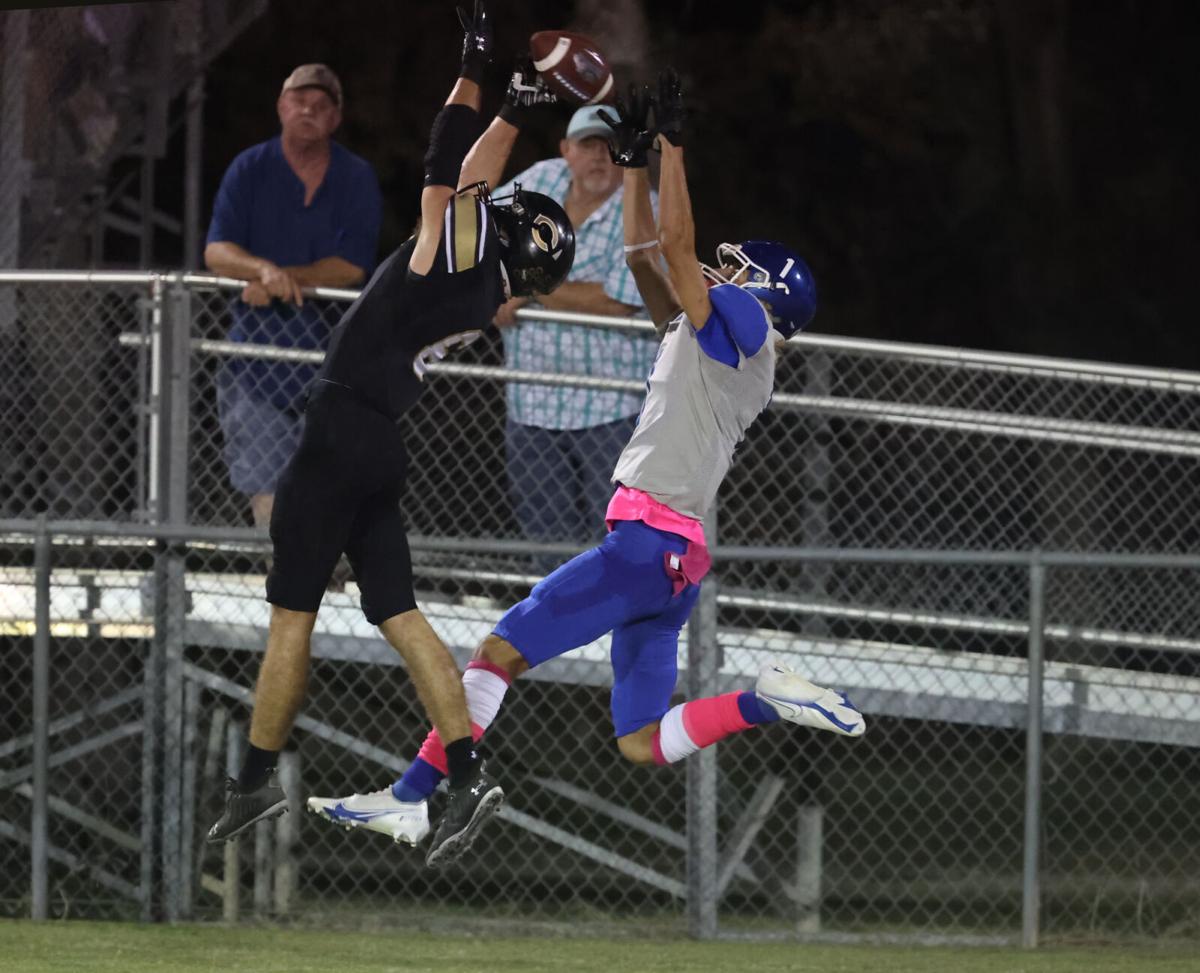 Crawford's Trey Dobie breaks up a pass intended for Bosqueville's Stephen Devorsky in the first half of Friday's game. Crawford rolled to a big win in district play. 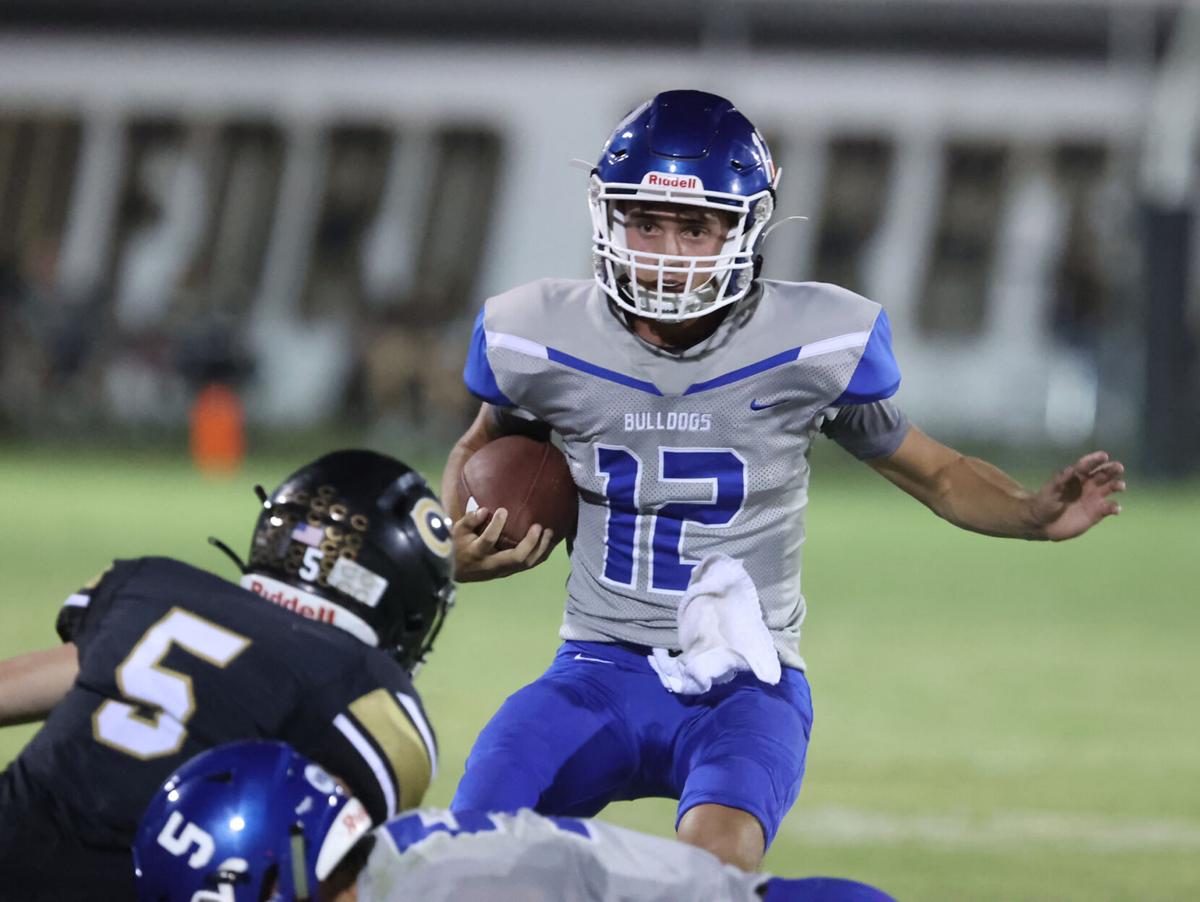 Bosqueville's Newt Schornack is pressured by Crawford's Ben Baker in the first half of a big district game in Crawford. The Pirates rolled to an easy victory. 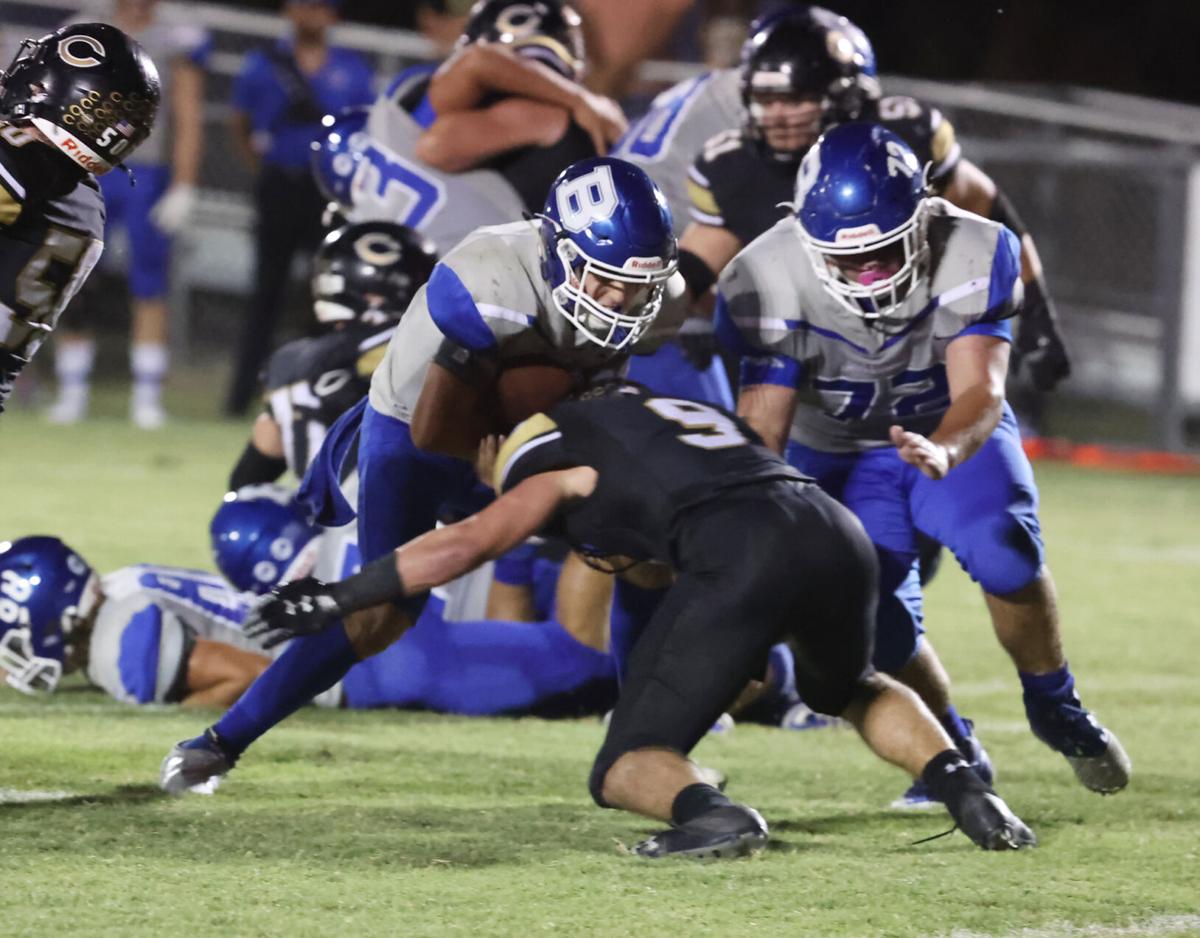 Bosqueville quarterback Justin Moore scores past Crawford's Camron Walker in the first half. 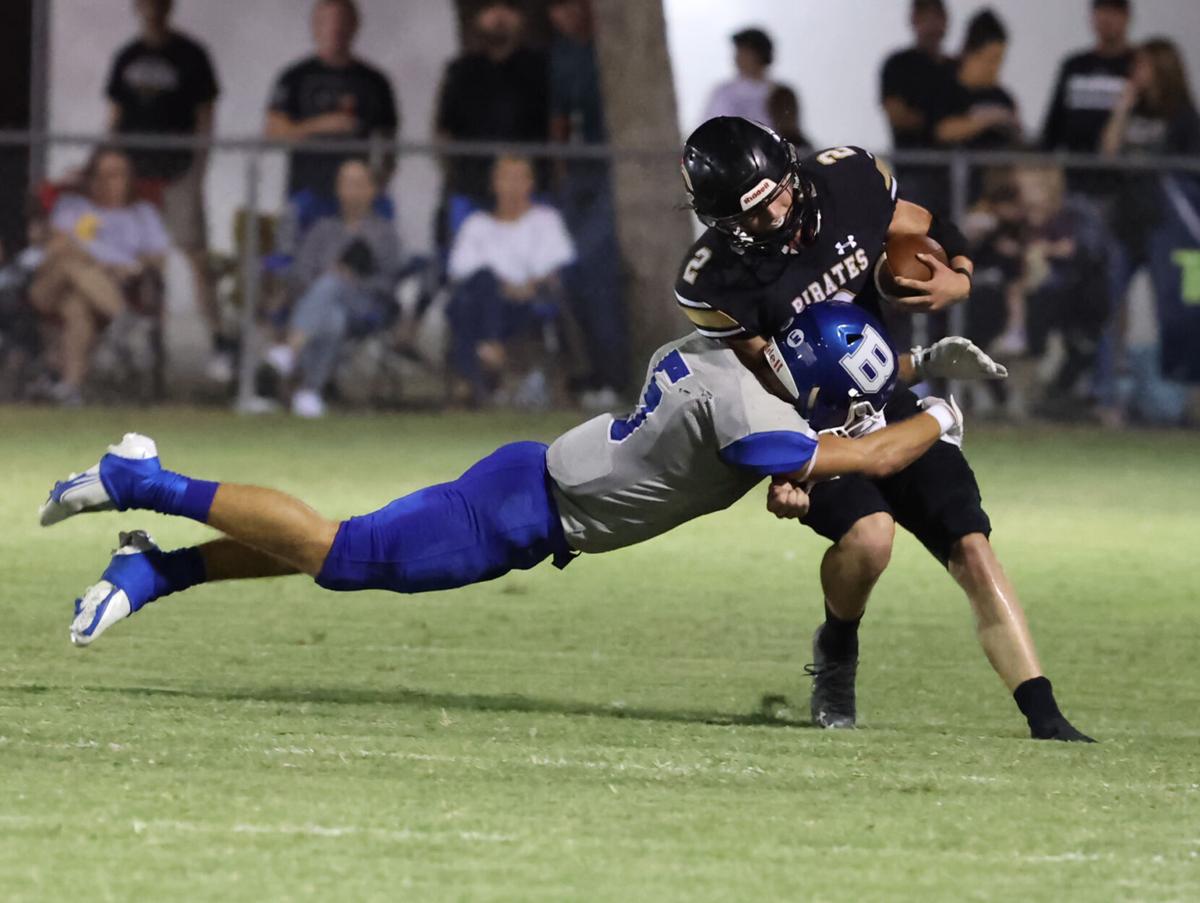 Bosqueville's Brooks Nunn brings down Crawford's Luke Torbert in the first half of Friday's game. The Pirates rolled to an easy victory in a district showdown. 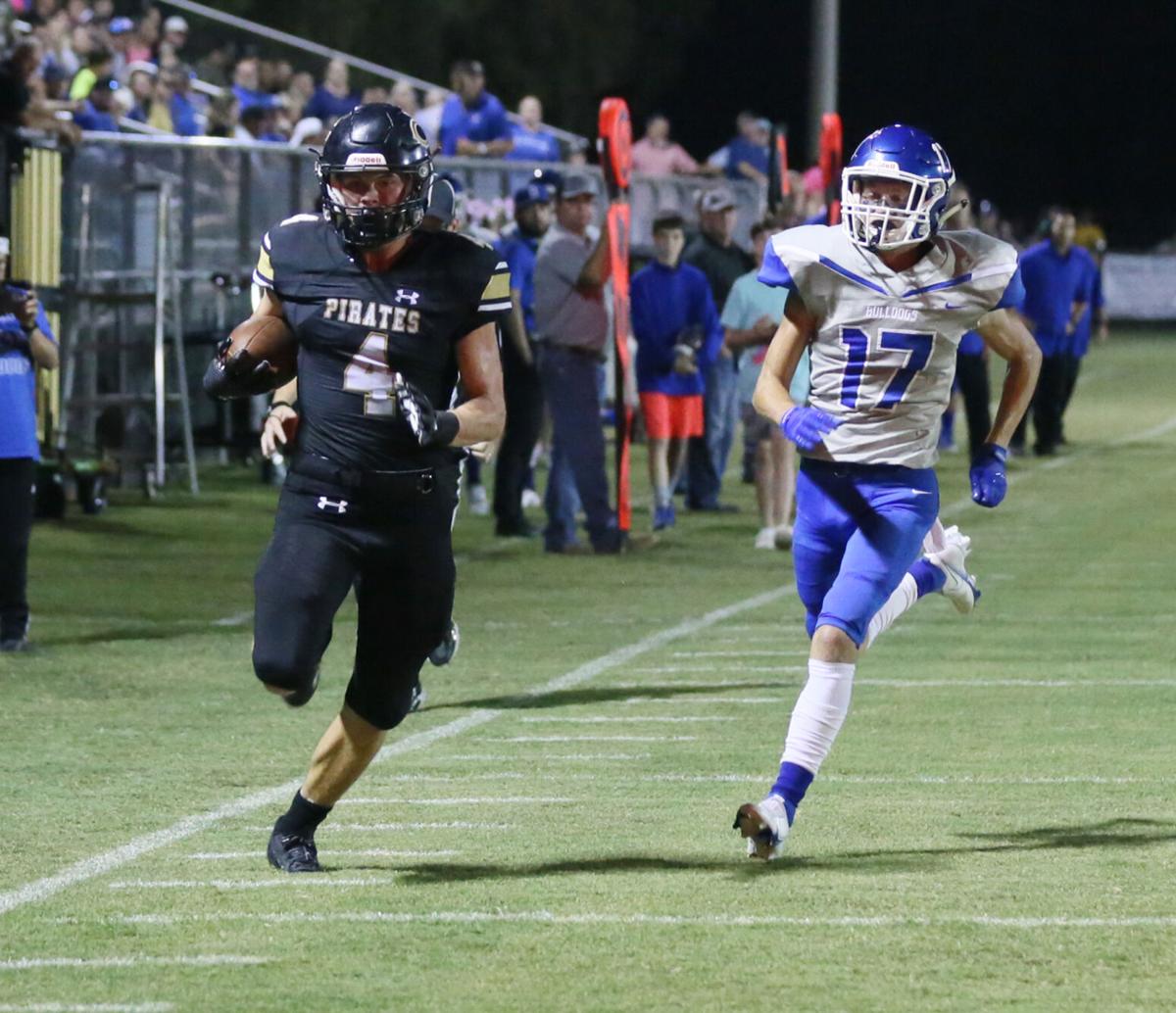 Crawford's Breck Chambers jets to the end zone past Bosqueville's Jayce Powers in the first half.

Yeah, he can do that too.

Torbert ran for three touchdowns, threw a scoring pass and caught a touchdown pass from Camron Walker as No. 4 Crawford raced to a 54-14 win over Bosqueville Friday night to take command in the District 7-2A Division I race.

The Pirates (8-0, 4-0) are the only remaining unbeaten team in the district following their win over the Bulldogs (5-3, 3-1), with two regular season games remaining.

But his most surprising play was when he handed the ball to Walker and then broke out alone into the clear. Walker hit the uncovered Torbert for a 16-yard touchdown pass with 3:41 left in the third quarter.

But the touchdown catch was highly unexpected.

“That was a new wrinkle,” Jacobs said.

Torbert ran for 36 yards on 10 carries and hit three of seven passes for 107 yards, but he had plenty of help from his friends as Breck Chambers rushed for 119 yards and a touchdown on 16 carries while Walker ran for 73 yards and a score on 10 carries. Seven players carried the ball for the Pirates, who amassed 317 yards rushing and 123 passing.

“We’re developing depth every week,” Jacobs said. “If we plan to go very far down the road at the 2A level, you better know how to play more than one position offensively and defensively, and that’s something we really worked hard on during the week and fortunately it paid off.”

Crawford’s defense played well throughout the game by holding the Bulldogs to 196 total yards and intercepting a pair of passes.

The Bulldogs hung in the game midway through the third quarter as quarterback Newt Schornack ran for a 13-yard touchdown to cut Crawford’s lead to 28-14.

But the Pirates’ depth eventually wore down the Bulldogs, who had just 19 players listed on their roster and lost running back Hunter Henexson on the opening series of the game when he limped off the field.

Following Schornack’s scoring run, Chambers returned the kickoff 32 yards to Bosqueville’s 42. Torbert found Baker streaking down the right sideline for a 31-yard touchdown pass to give the Pirates a 34-14 lead with 4:03 left in the third quarter.

Walker’s interception and 24-yard return set up the Pirates at Bosqueville’s 16 where he threw the touchdown pass to Torbert.

On the first play of the fourth quarter, Torbert ran for a four-yard touchdown before Brady Ward completed Crawford’s 26-0 finishing run with a one-yard scoring run with 2:54 remaining.

The Pirates started the game hot as they drove 59 yards for a touchdown on their first possession. Walker was the catalyst as he popped up the middle for a 20-yard touchdown to give the Pirates a 6-0 lead with 7:08 left in the first quarter.

Crawford had a shot to take a quick two-touchdown lead by driving to Bosqueville’s 19 before John Youens intercepted Torbert’s pass in the end zone for a touchback.

But after Bosqueville was forced to punt for the third straight time, the Pirates took over with great field position after Chambers returned Youens’ punt 12 yards to the 50.

Chambers broke loose for a 33-yard touchdown down the right sideline to open up a 13-0 lead with 10:35 left in the second quarter.

The Bulldogs responded with their longest drive of the night as they moved 92 yards with the aid of a pair of pass interference penalties against the Pirates.

The first penalty on third-and-11 gave them a first down at their own 22. The Bulldogs kept the drive alive with Justin Moore’s three-yard run on fourth down to Crawford’s 43.

After Schornack rambled for 20 yards, the Bulldogs were bailed out again by another pass interference penalty on fourth-and-seven at the 19.

On the next play, Moore ran for a four-yard touchdown as Bosqueville cut Crawford’s lead to 13-7 with 6:37 left in the second quarter.

After forcing a Crawford punt, the Bulldogs moved into Pirates territory again. But on fourth-and-three from the 40, Schornack was forced out of the pocket and threw an incomplete pass.

Crawford took advantage of the field position as Colt Murphree picked up 24 yards on a reverse. Three plays later, Torbert rammed across for a one-yard touchdown run and then ran for the two-point conversion to lift the Pirates to a 21-7 lead with 52 seconds left in the second quarter.

Crawford's Trey Dobie breaks up a pass intended for Bosqueville's Stephen Devorsky in the first half of Friday's game. Crawford rolled to a big win in district play.

Bosqueville's Newt Schornack is pressured by Crawford's Ben Baker in the first half of a big district game in Crawford. The Pirates rolled to an easy victory.

Bosqueville quarterback Justin Moore scores past Crawford's Camron Walker in the first half.

Bosqueville's Brooks Nunn brings down Crawford's Luke Torbert in the first half of Friday's game. The Pirates rolled to an easy victory in a district showdown.

Crawford's Breck Chambers jets to the end zone past Bosqueville's Jayce Powers in the first half.