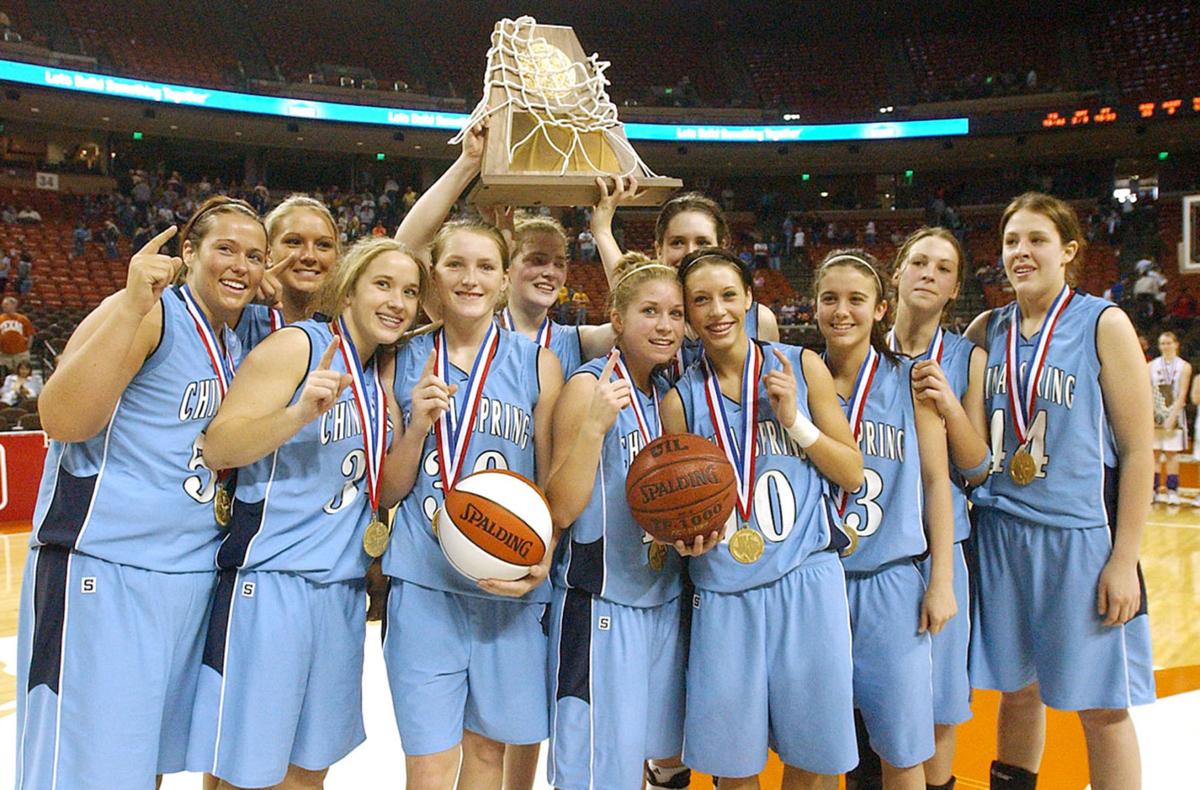 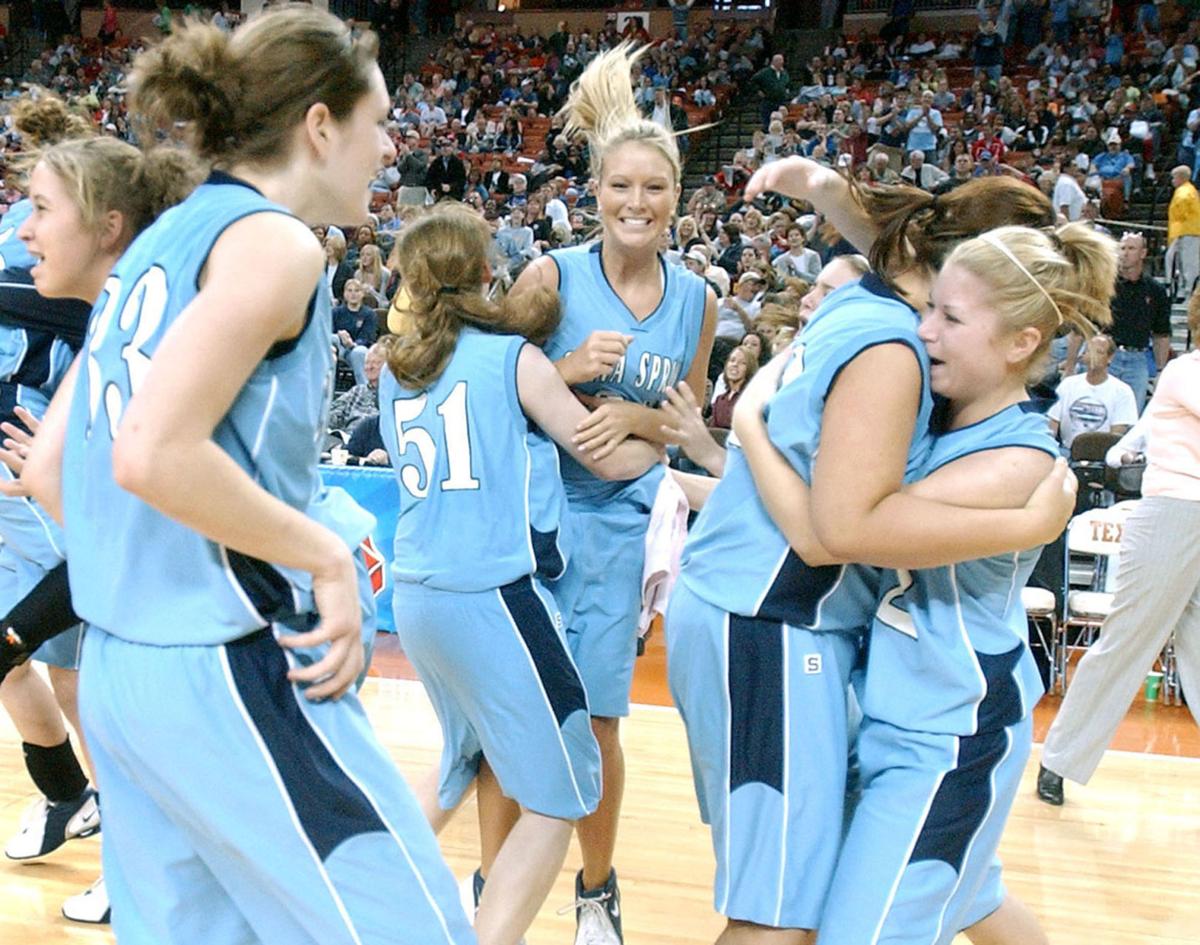 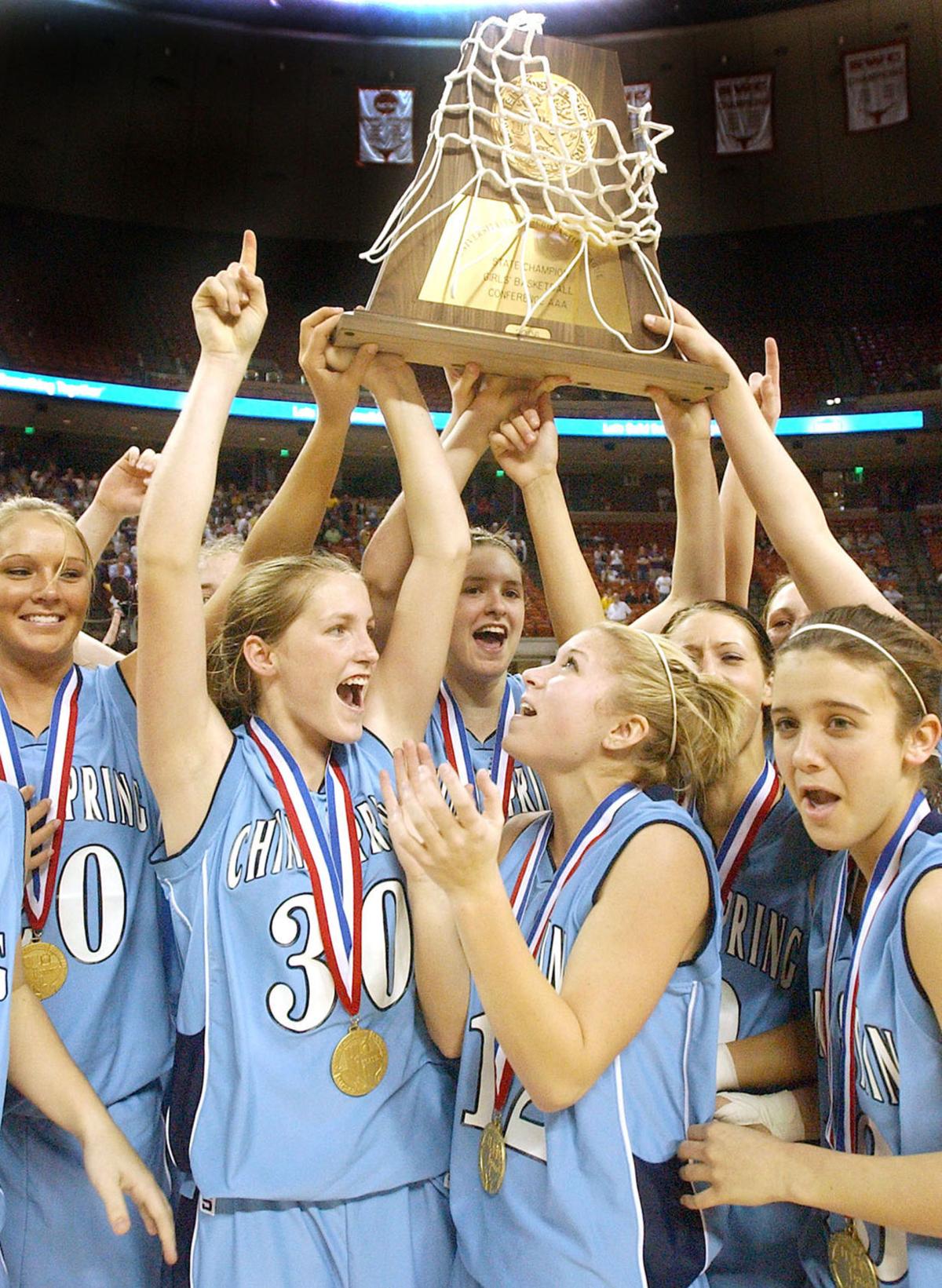 China Spring players, including Jessica Hanna (30) and Haley Edwards (12) lift their Class 3A state championship trophy after beating Abilene Wylie in 2006. It marked the first title in program history. 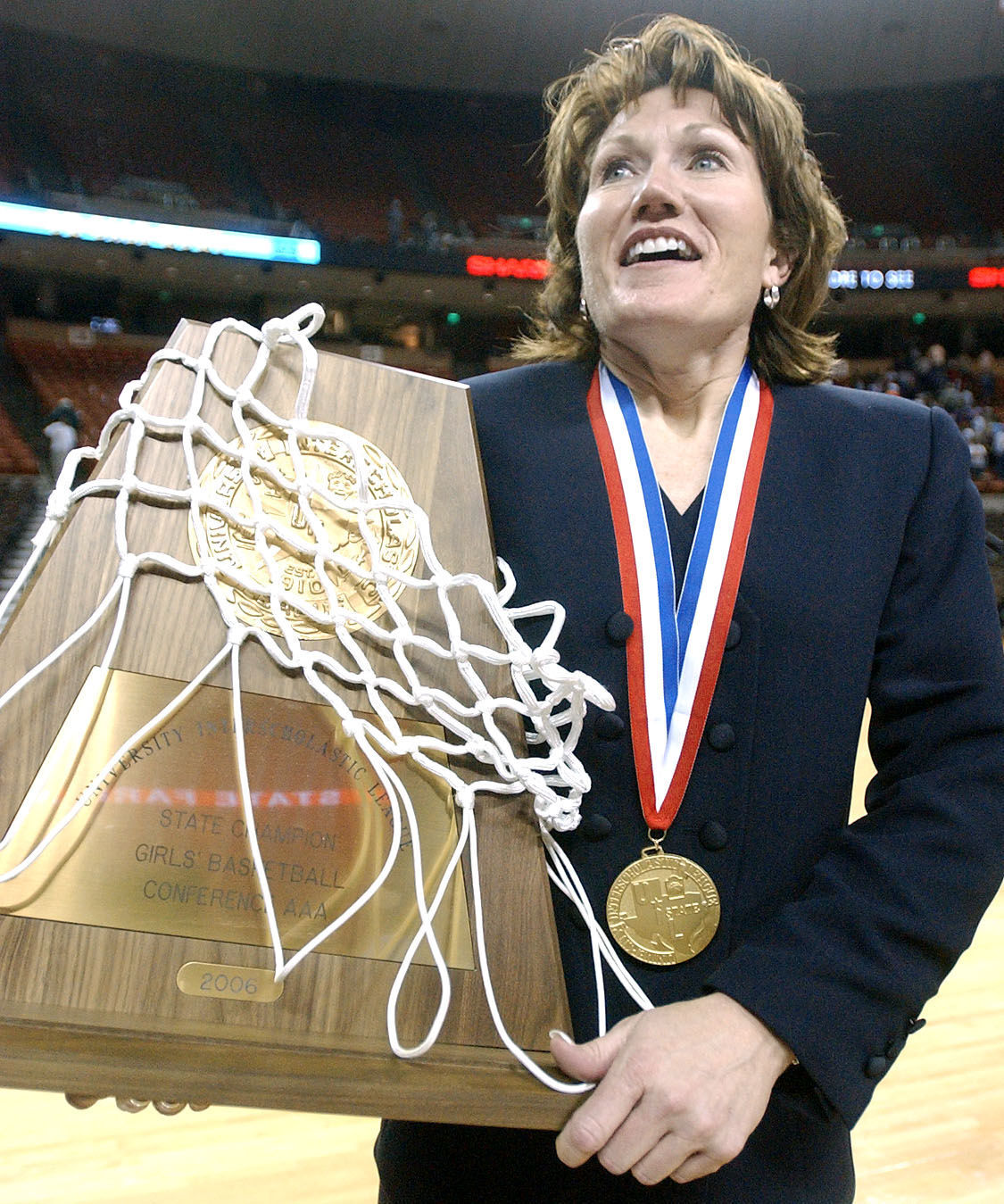 AUSTIN – If it wanted, the UIL could affix a label to this year’s 3A girls basketball state championship trophy – “Made in China.”

China as in China Spring, that is.

China Spring claimed that elusive trophy – the first in program history – by fighting off a valiant charge from Abilene Wylie and winning, 57-54, in the 3A state title game before a crowd of 7,617 Saturday at the University of Texas’ Frank Erwin Center.

China Spring (34-4) was making only its second trip to the state tournament and its first appearance in the final, but the Lady Cougars played with a cool confidence that belied their inexperience.

“We talked about there’s not many teams across the state that really, truly believe that they can win (a state title),” China Spring coach Teresa Durham said. “We truly believe when we play our game, we’re unstoppable. (The players) think I’m corny, but I made them last night, or the night before last, go stand in front of a mirror and look at that mirror and say, ‘I believe I can be a state champion.’ I think these ladies proved they had heart.”

Heart, sure, and more than a little guts. The Lady Cougars seized control early in the first quarter and either held the lead or were tied for the vast majority of the game. But Wylie (27-6) put a scare into the sea of blue-T-shirt-wearing China fans when senior post Courtney Laing converted a turnaround and a free throw with 2:43 left to play, giving the Lady Bulldogs their first lead at 54-53.

China Spring hung tough, pulling back ahead by three with 56 ticks remaining on a pair of clutch free throws from senior forward Anna Raines.

Wylie still had a shot to tie when it regained possession with nine seconds left, but Lady Cougar guard Jessica Hanna anticipated Kelsey Darby’s baseline three-point attempt, and pounced for a title-clinching block.

“I’m just a short little white girl that tries to jump and block people like (forward) Karlyn Meyers over here,” Hanna said. “I tried. Her coach was telling her to shoot it, so I just got a little head start.”

Wylie coach Alan Ayers said that the ball went exactly where it was supposed to – prior to the block, that is.

“We wanted our guard to get some dribble penetration and get a kick-out,” Ayers said. “We had our best three-point shooter (Darby) on the baseline and then we had Regan Burks, who has a nice touch from the outside, up top. We did a good job of creating an opening and getting it to a shooter, but their girl just did an amazing job blocking the shot.”

In a way, the play typified China Spring’s season, given that it came on the defensive end of the floor. The Lady Cougars were downright miserly all season, and surrendered only 46.3 points per outing in six playoff games.

“Jessica Hanna has no fear, and sometimes that gets us in trouble and sometimes it works out,” Durham said. “That (block) was a great play, and it was definitely fitting.”

Following Hanna’s swat, only a tenth of a second remained on the clock, and Wylie wasn’t able to get a shot off in that fraction of time.

As the horn sounded, the Lady Cougar players sprinted toward each other, eventually meeting in a massive bear hug at center court.

“I was going crazy, screaming and jumping up and down,” Hanna said. “You don’t even know what’s going through your head.”

“It’s an unbelievable and wonderful feeling,” Raines said. “You can’t even describe it. You think about all the people who helped you get to this point. I’m pretty sure when I see my parents in a few minutes I’ll get a big hug.”

Raines closed off her senior year in style, claiming the championship game MVP award as well. She tallied 24 points, six rebounds and three steals, and continued her sizzling shooting from the free-throw stripe, hitting seven of eight attempts.

Raines was one of only three Lady Cougars to score in the title game, as Hanna (20 points) and Meyers (13) accounted for the rest of the points. But Durham praised the efforts of her entire team, whether it was freshman point guard Kelli Richardson (five assists, four steals) zipping through Wylie’s press or German foreign exchange student Mimi Weingarten coming off the bench to snag several key offensive rebounds.

“I know it sounds like a broken record, but we are a team in every sense,” Durham said. “If somebody falls down, somebody else has to step up and get it done.”

For Wylie, Laing more than got it done. The senior center, a Texas-San Antonio signee, proved ever-sticky in the paint for the Lady Cougar defense, scoring a game-high 28 points to go with nine rebounds.

“She was tough,” said Meyers, who often drew the assignment of guarding Laing. “She doesn’t look as big as she really is, but she’s huge. She can pin you really easily. I tried to front her at first, but obviously that didn’t work.”

But Laing’s heroics weren’t quite enough to topple the Lady Cougars, who withstood every charge with their 52.4 percent second-half field goal shooting and 12-of-14 accuracy from the line.

In the end, all the numbers added up to a state championship victory for the Lady Cougars, who felt like they’d conquered the world.

“How can you stop smiling?” Raines said. “It’s the most amazing feeling in the world. Before every game, in our huddle, we say, ‘Play like champions!’ Now we are.”

This is the latest in a series of classic sports stories from the Tribune-Herald archives. It covers the China Spring girls basketball team's breakthrough state championship win over Abilene Wylie on March 4, 2006, which claimed the program's first title and capped off a 34-4 season.

There are certain things that define Mart football with very precise numbers.

See who turned in the biggest performances this week.

There are just six days left to vote in the first round of this year’s Tribune-Herald Super Poll, where fans pick their favorite football play…

ARGYLE — Facing its fourth ranked opponent in as many weeks, the La Vega Pirates knew they had their work cut out for them.

This week’s matchup between top-10-ranked Lampasas and China Spring has been scratched due to COVID-19.

Crawford captures 13-8 win in fantastic showdown with No. 10 Holland

CRAWFORD — The best football games come down to which team can make more plays in the fourth quarter.

WEST — Trey Janek knows his way to the end zone, and his efforts helped the West Trojans find their way back to the winner’s circle.

On repeat: #2 La Vega, #1 Argyle face off in familiar circumstances

No matter who wins this game, the 4A D-I heavyweight programs are likely to see each other again in the playoffs.

China Spring players, including Jessica Hanna (30) and Haley Edwards (12) lift their Class 3A state championship trophy after beating Abilene Wylie in 2006. It marked the first title in program history.