In a roller coaster season opener, the Lions scored the last two touchdowns in the fourth quarter as they overcame West Mesquite for a 32-23 win Friday night at WISD Stadium.

Coming off a 1-9 season, the win will be a confidence booster for Waco High coach Kwame Cavil’s team. The Lions’ defense forced five turnovers, including three fumbles and a pair of interceptions. Marvion Huitt’s pick at Waco High’s 15 helped seal the win with 3:35 remaining.

Waco High senior quarterback Nate Reyna delivered a solid performance as he hit 12 of 16 passes for 198 yards and two touchdowns. Braylon Martinez scored three times for the Lions as he made touchdown catches of 45 and seven yards and ran for a 20-yard score.

Martinez came up big when the Lions needed it the most as he scored two fourth-quarter touchdowns. They were Waco High’s first points since scoring 19 in the first quarter.

After the Wranglers scored 23 straight points, the Lions answered when Martinez ran for a 20-yard touchdown on a reverse on fourth-and-eight for a 25-23 lead with 9:06 left in the game.

It appeared Martinez would be stopped behind the line of scrimmage, but he broke around the left side and then cut inside past a Wranglers defender for the score.

Reyna went deep to Xavier Williams for a 50-yard touchdown, but the receiver was called for unsportsmanlike conduct for taunting the West Mesquite defense at the 6 to put the ball back at the 21.

The Lions scored anyway as Martinez caught Reyna’s pass for a seven-yard touchdown as the Lions took a 32-23 lead with 6:07 remaining.

The Lions won despite being penalized 14 times for 134 yards.

After scoring 16 points in the second quarter, the Wranglers took their first lead when Briceson Walker ran for a three-yard touchdown to grab a 23-19 edge with 32 seconds left in the third quarter.

West Mesquite’s touchdown came after the Lions failed to score after Waco High lineman Jamarcus Carprew recovered a fumble at the Wranglers’ 23.

But the Lions couldn’t convert as Reyna was dropped for a pair of seven-yard losses.

Following Waco High’s punt, the Wranglers moved 82 yards for Walker’s go-ahead touchdown. After Cipriano hit Javion Jackson for 40 yards, a pair of pass interference penalties against the Lions set up the touchdown.

The Lions jumped off to a remarkable start to open the game as they scored touchdowns on their first three possessions to take a 19-0 first-quarter lead.

After receiving the opening kickoff, Waco High moved 68 yards on five plays for its first touchdown.

Reyna hit Remond O’Neal on passes of 12 and 19 yards to set up Omarion Delao’s 21-yard blast up the middle for a touchdown with only 78 seconds off the clock.

Waco High’s Jamez Thompson recovered a fumble by Walker at West Mesquite 45. Facing third-and-10, Reyna hit Martinez in stride down the right sideline for a 45-yard touchdown to open up a 12-0 lead with 7:19 left in the first quarter.

The Lions were back in business again when Cameron Ancher recovered a West Mesquite fumble on the kickoff at the 32.

After Reyna hit O’Neal for a 19-yard gain to the 17, the Lions picked up another first down before Jaelyn Laster pounded into the end zone for a two-yard touchdown run to stretch the lead to 19-0 with 4:06 left in the first quarter.

As much as Waco High owned the first quarter, West Mesquite owned the second quarter with 16 unanswered points to cut the lead to 19-16.

The Wranglers moved 55 yards to Waco High’s 10 before Thompson nailed Walker for a four-yard loss. Austin Stout drilled a 31-yard field goal to cut the Lions’ lead to 19-3 with 4:53 left in the second quarter.

The Wranglers scored their first touchdown when Devin Duncan made a leaping catch in the end zone on a 15-yard pass from Cipriano with 1:50 left in the second quarter. 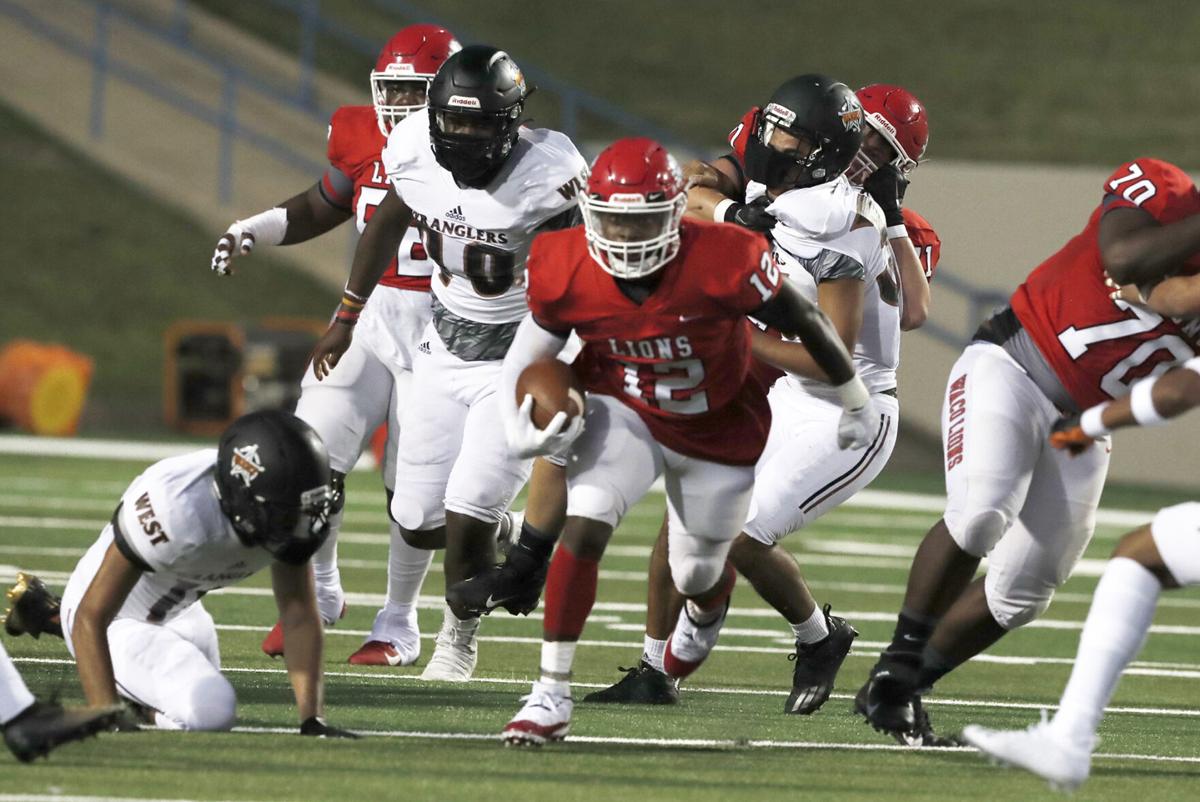 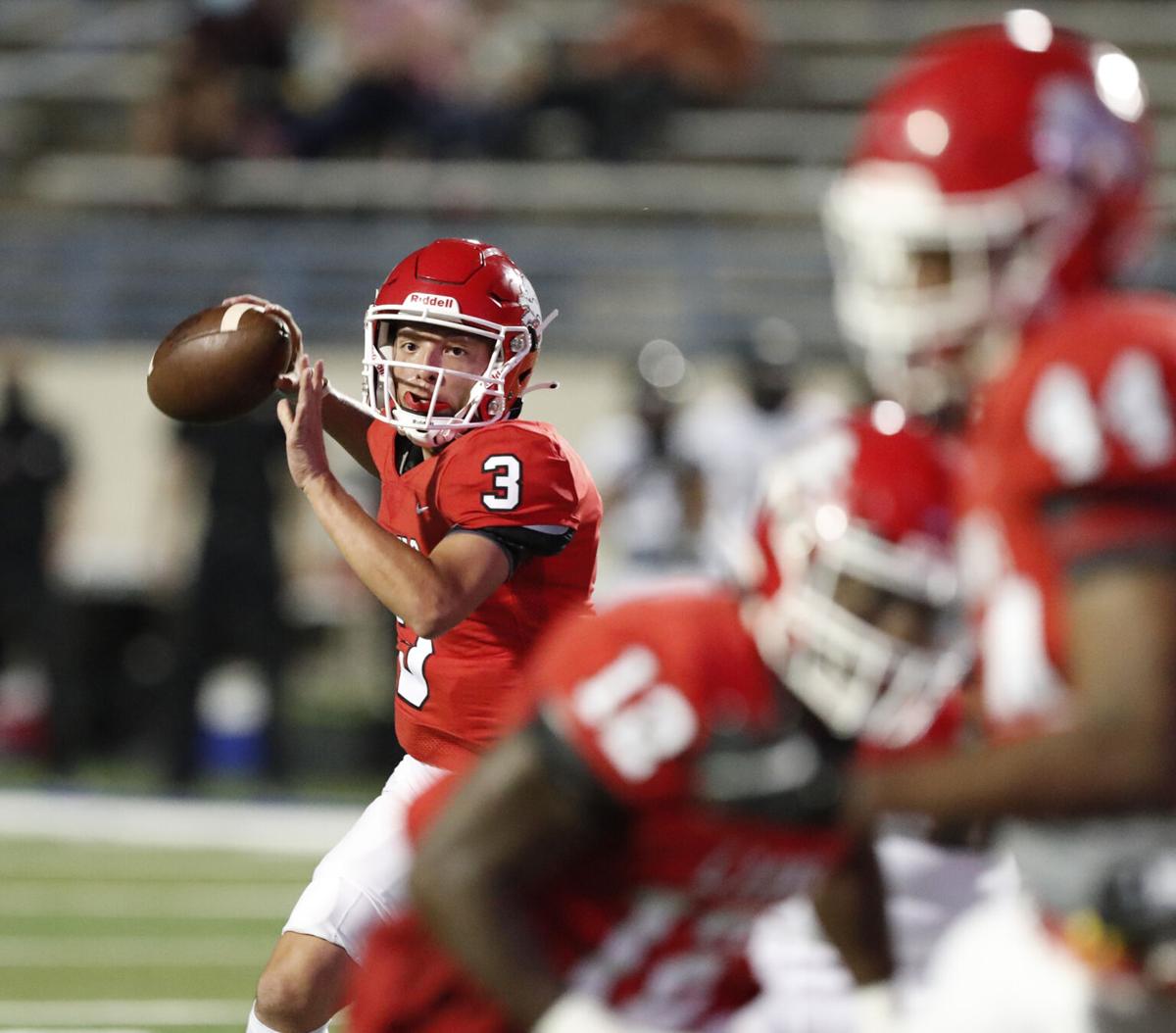 Waco High quarterback Nate Reyna looks to throw down field against West Mesquite in the first half. 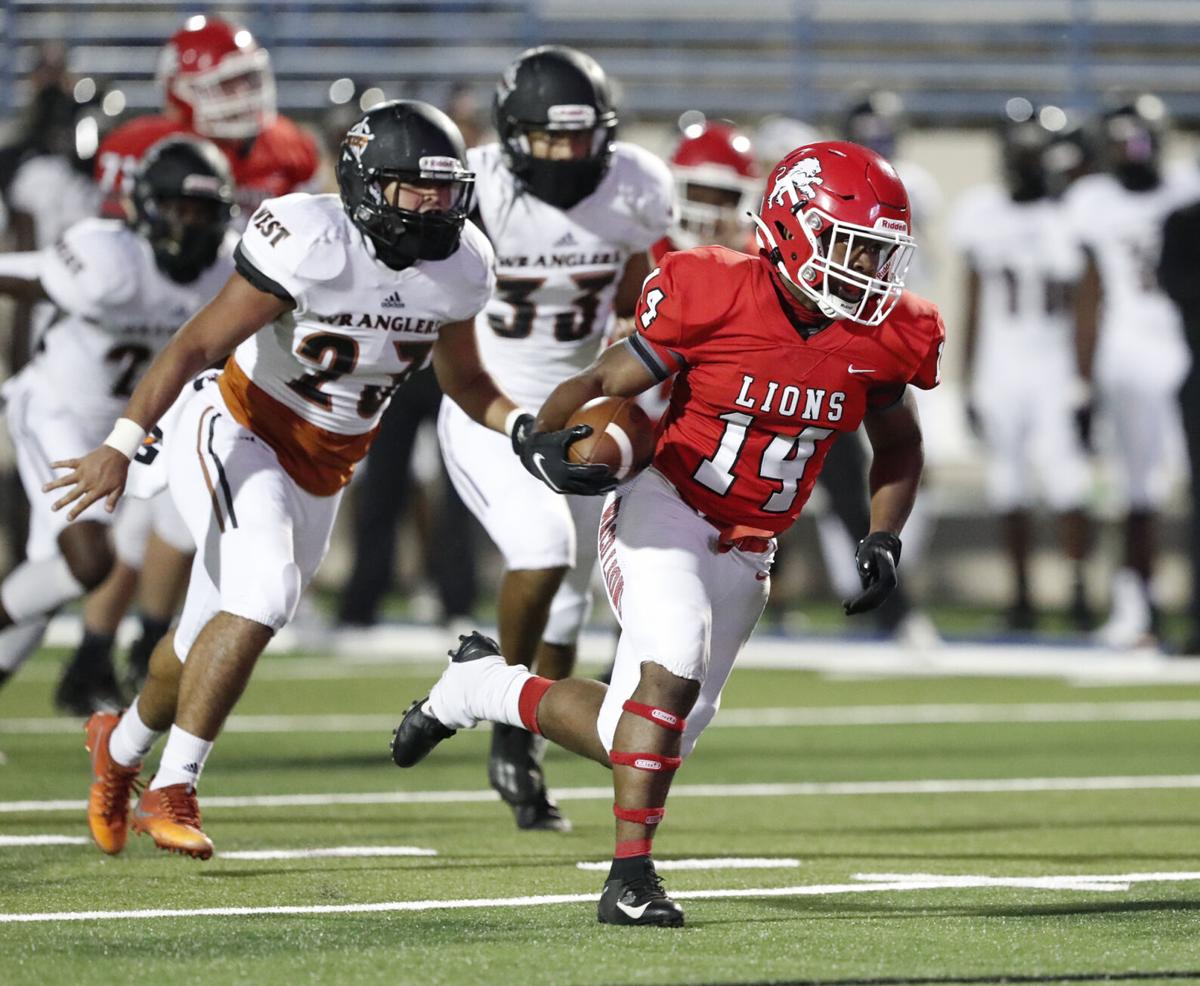 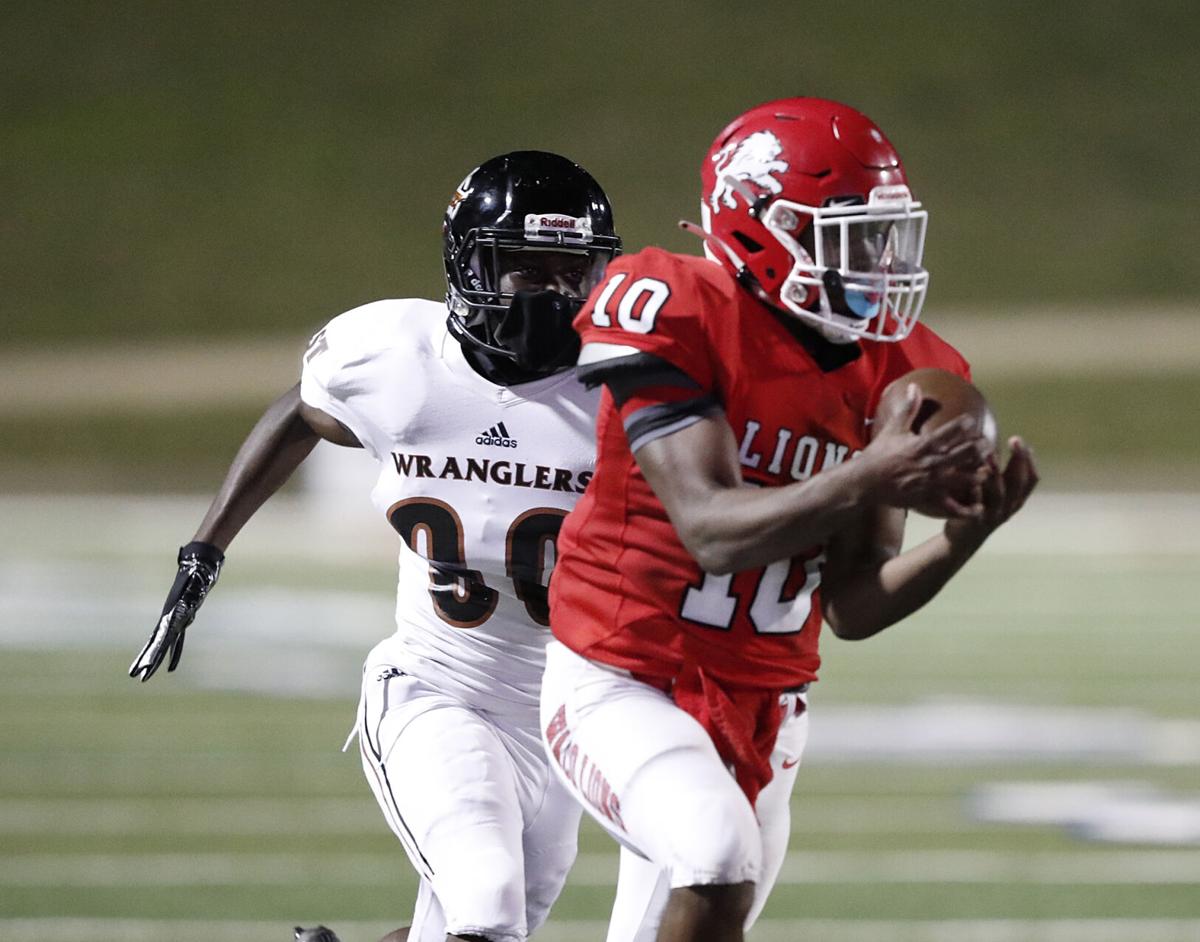 Waco High’s Braylon Martinez pulls down a pass in front of West Mesquite’s Abraham Salami in the first half. 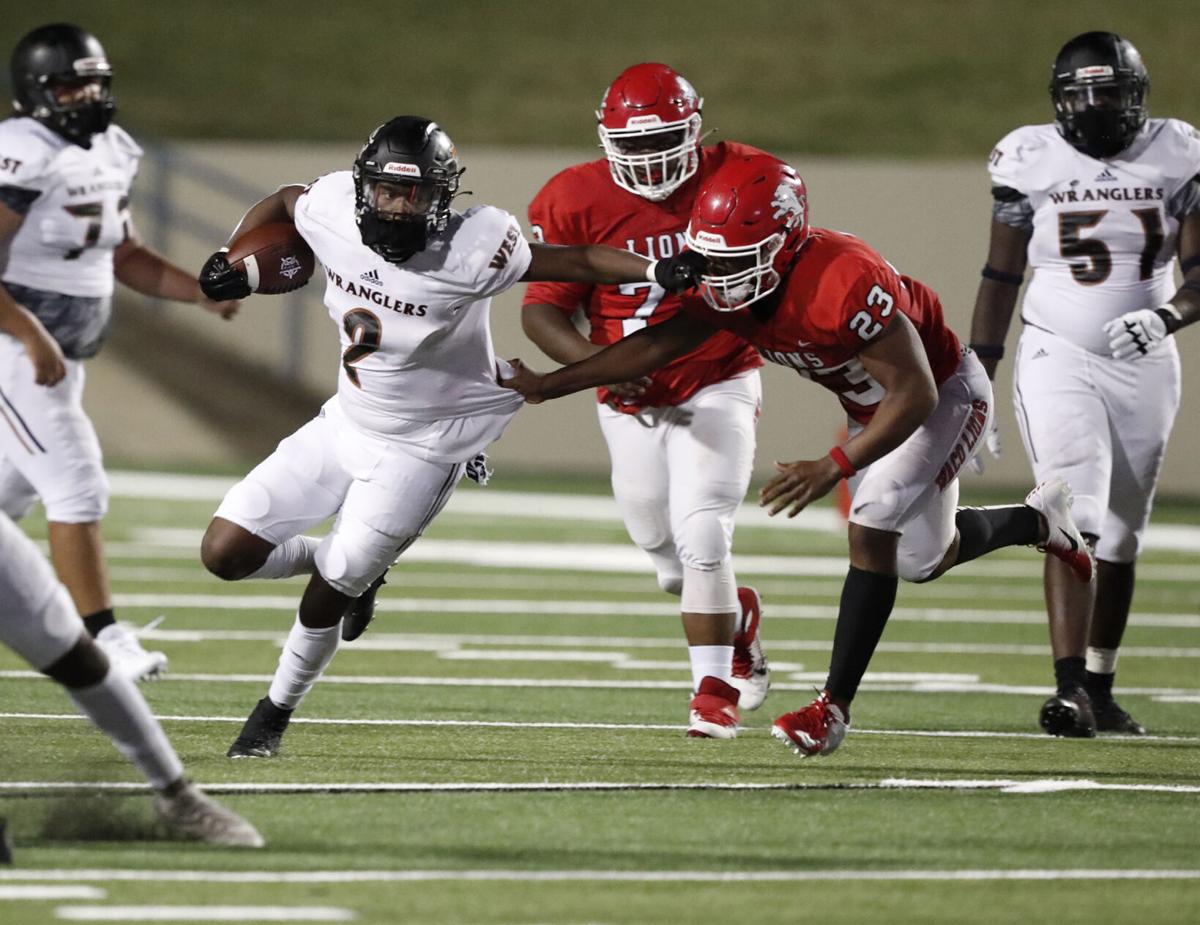 Waco High’s Tyron Minnitt grabs the jersey of West Mesquite’s D’Erian Mitchell in the first half.