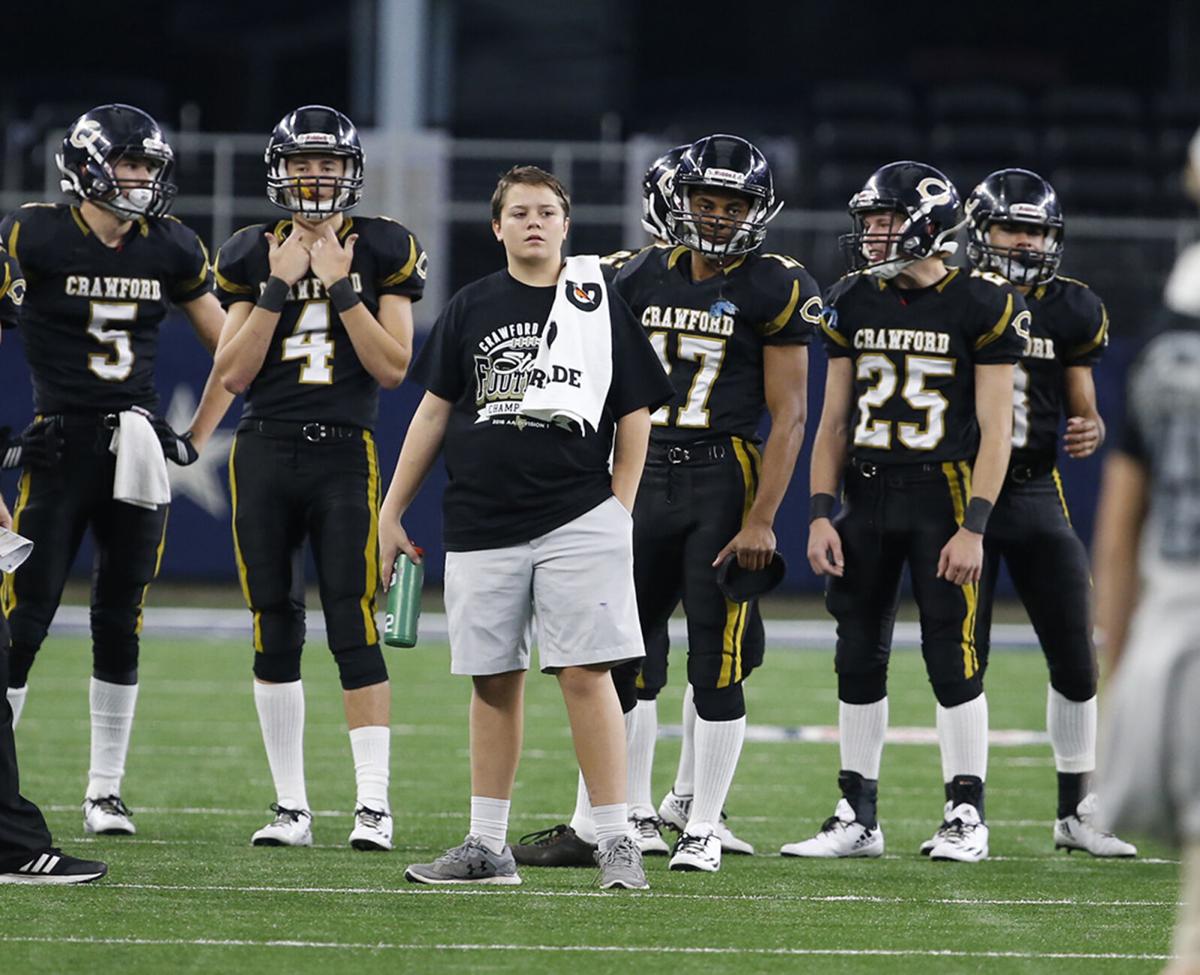 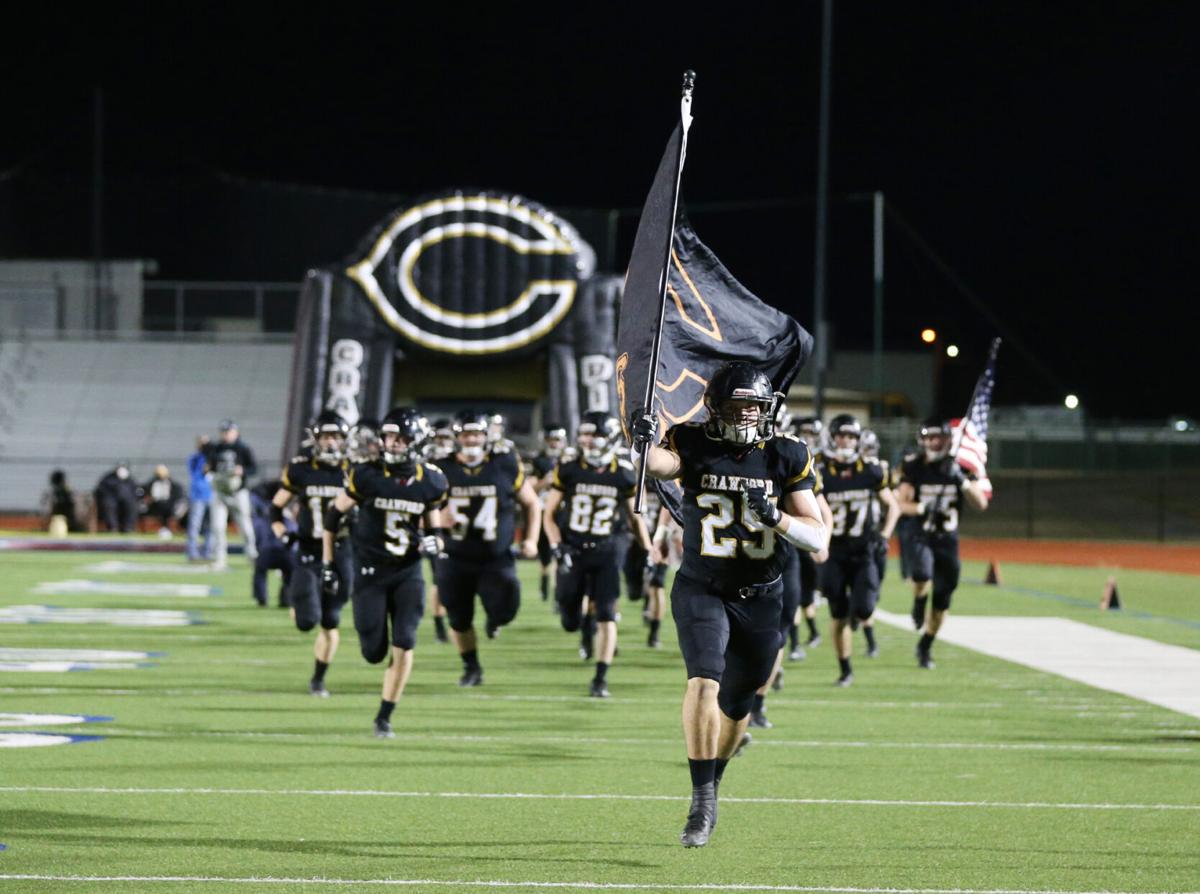 Crawford senior Garrett Pearson carries the school's flag as he leads the team onto the field for the regional final game versus Bosqueville last week. 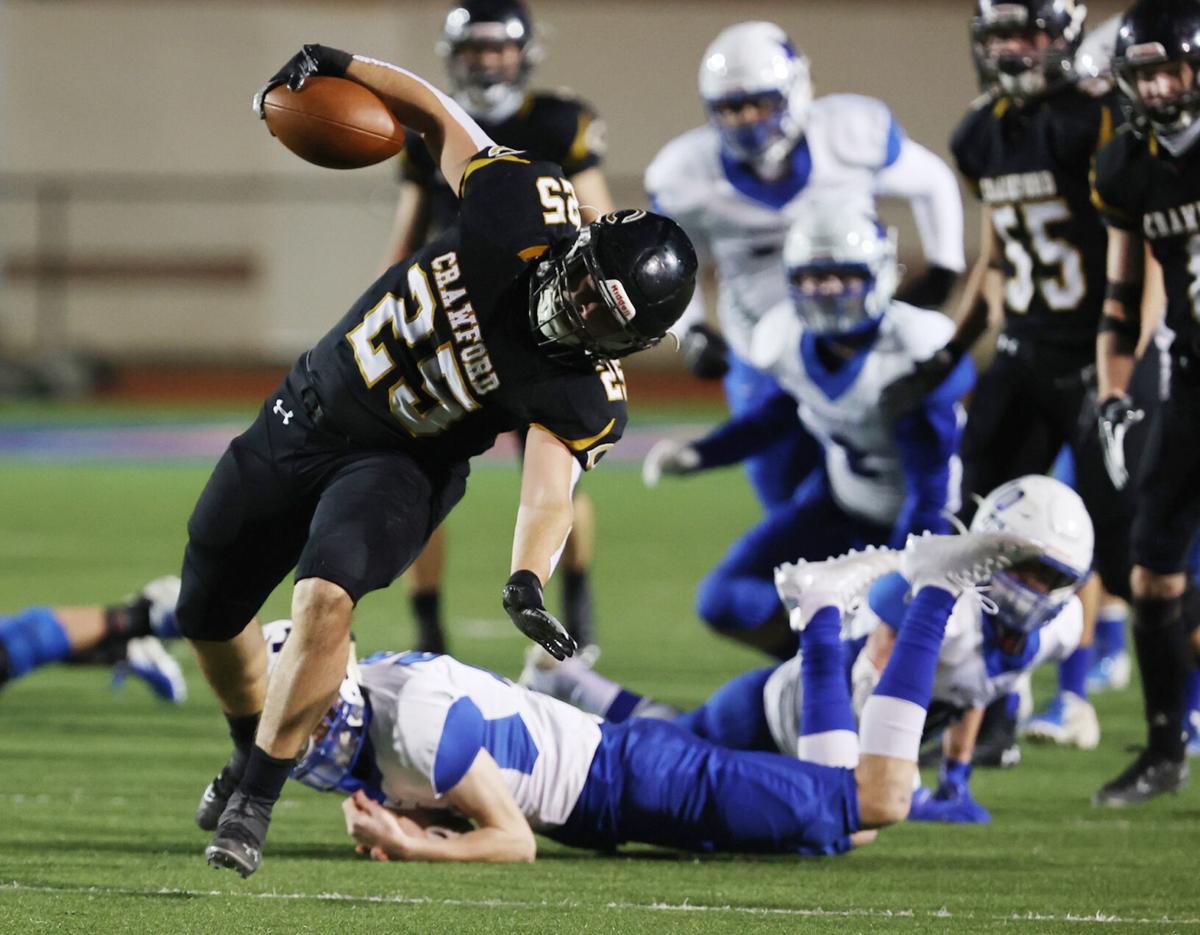 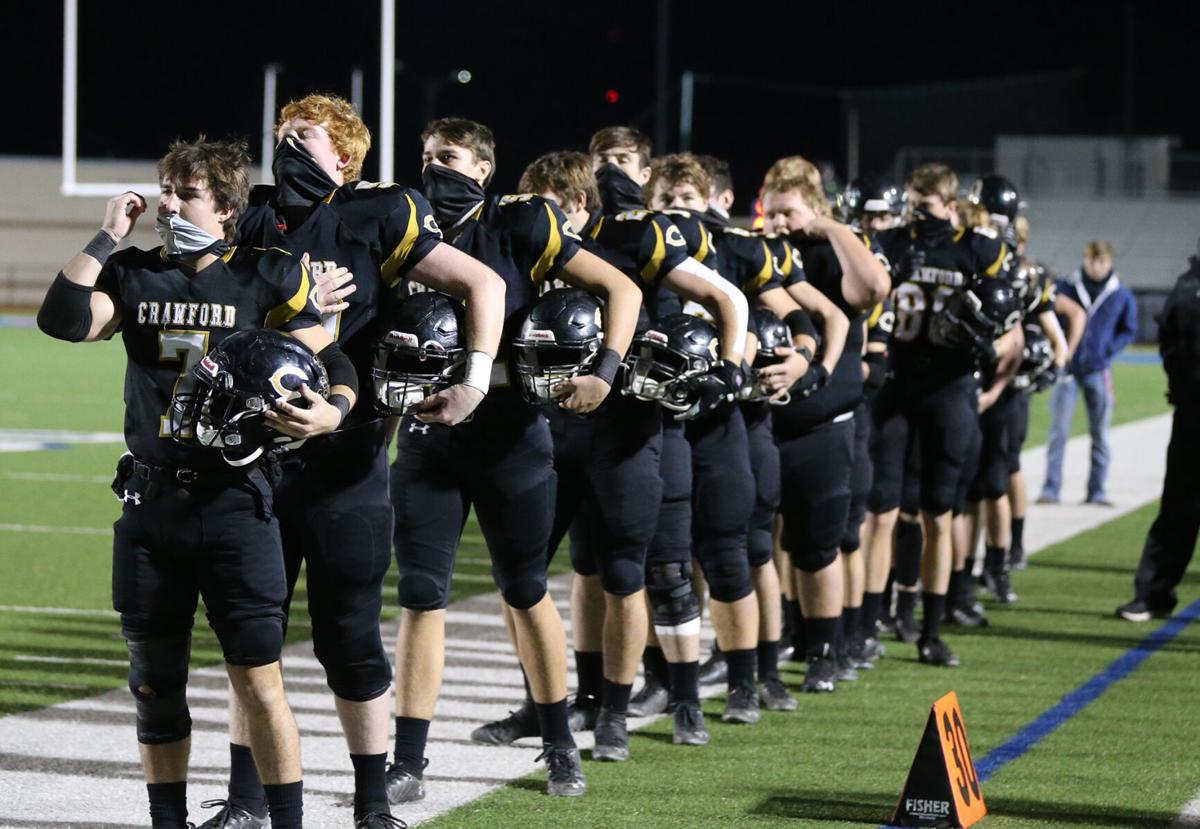 Crawford stands on the cusp of a state championship game berth if it can get past Post in Thursday's state semifinals. 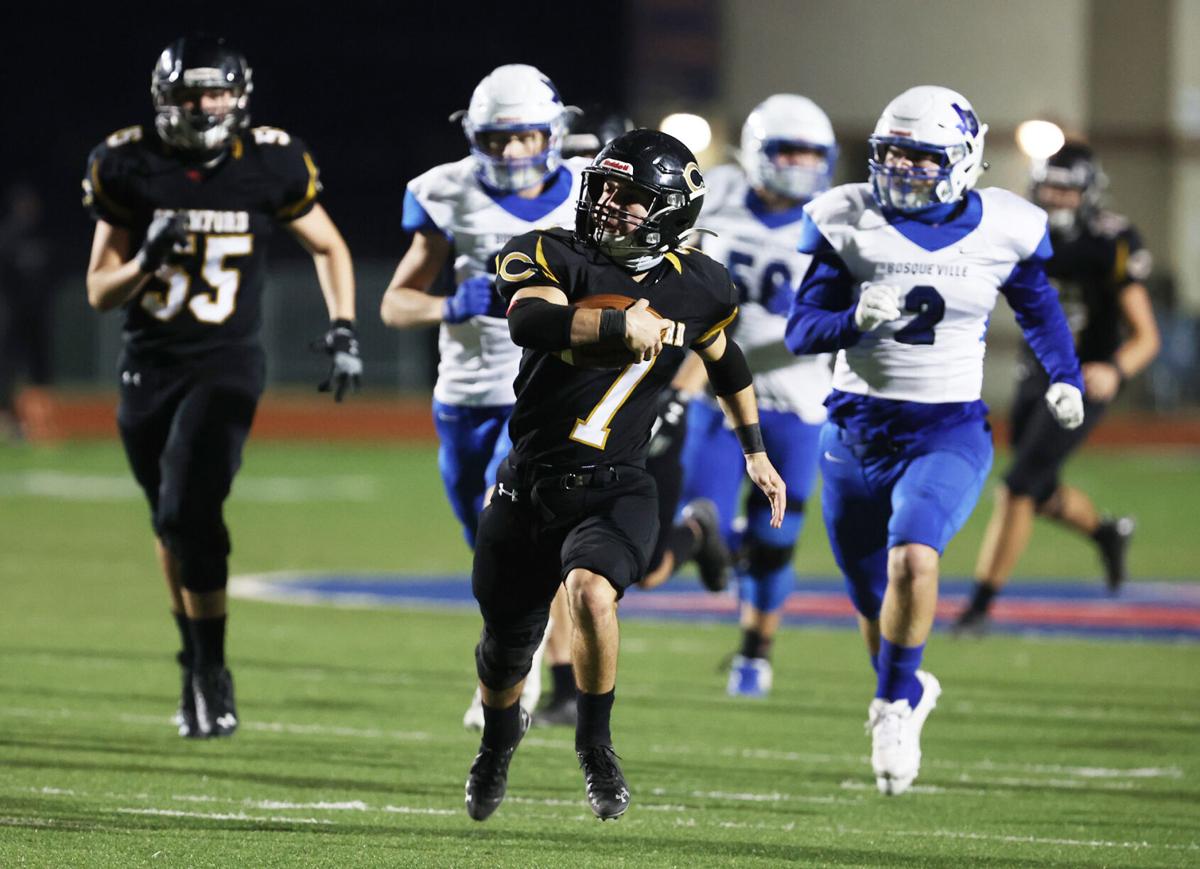 Crawford quarterback Tanner Merenda sprints past the Bosqueville defense to score in the first half of last week's regional final.

Four years ago, a group of Crawford eighth graders were just enjoying the ride.

The kids experienced the thrill of a long high school football playoff run as Crawford advanced all the way to the Class 2A Division I state championship game at AT&T Stadium in Arlington. And then they felt the agony of defeat as Refugio claimed a narrow 23-20 victory over the Pirates to win the state title on the Jerry World turf.

Though they were young, the magnitude of the moment wasn’t lost on these middle schoolers.

“I told Garrett and Tanner after we lost that we were going to be back here our senior year,” Gohlke said.

Not only is Gohlke a force on both the offensive and defensive lines, he’s a red-headed prophet. Just as he predicted, those eighth graders who had a front-row seat and a blast during the 2016 state-title-game run are now one win away from getting there themselves as seniors.

Crawford (13-1, ranked No. 7 in Class 2A Division I) will face third-ranked Post (14-0) at 7 p.m. on Thursday at Gordon Wood Stadium in Brownwood. The winner advances to the 2A D-I state title game on Dec. 17 back at AT&T Stadium in Arlington.

“We had our sights set on that ever since two-a-days,” said Merenda, now Crawford’s senior quarterback. “We saw our playoff bracket and knew we could get super far. Now, it’s like, ‘Oh my gosh, we can actually do this. Let’s shoot for the stars.’ To be one of the last four left and to be able to actually get there is amazing.”

The current Pirate seniors learned the program’s traditions from their older brothers and other members of the 2016 team. They followed so closely that they see themselves as that old team made new.

Merenda went down the roster and explained why the linebackers are the same, the running backs, the wide receivers.

When Crawford coach Greg Jacobs thought about it, he could see it too.

“The offensive line is a staple of both teams, defense is really solid, good skilled wideouts — there are a lot of similarities, yeah,” Jacobs said with a chuckle.

“The bottom line is both teams had good chemistry,” Jacobs said. “They had a good mixture and they got along well and they worked well together. I think that’s the key to any successful team.”

Certain things are part of Crawford tradition. The Pirates have a player-enforced no-talking rule in the locker room in the moments leading up to games. The current Pirate seniors said there’s a certain energy that is basically a requirement at practice.

The 2016 Crawford squad didn’t invent those traditions. But they handed them down properly.

“They always brought the intensity to practice no matter who they were playing,” said Garrett Pearson, a senior fullback. “They never looked past anybody and that’s what we’ve done this year. We’ve stayed focused week in and week out.”

For Merenda, learning from the guys he looked up to back in middle school is still part of his football routine. He said he studies the game with Gage Pearson, Garrett’s older brother and the Pirates’ QB in 2016. Although Gage Pearson is a Texas Tech student now, they use Face Time to scout opponents together.

“He’s been mentoring me freshman, sophomore, junior and senior year,” Merenda said. “He helps me on the weekends, we’ll break down film together.”

Jacobs didn’t direct the current and past Pirate QBs to get together, but he’s not surprised they do. He called Merenda a “sponge,” trying to learn all he can about his position and every other spot on the field.

Such is the commitment level of these Crawford players. Hooser described it as the heart of the team. Once you get enveloped in the program, you understand the heart. That’s been especially important this fall as COVID-19 safety protocols and the threat of outside forces disrupting the season have been ever-present.

“With COVID and everything, you never know when it’s going to be your last game,” Hooser said. “So play with heart and give everything you’ve got. You only get one chance when it’s your senior year.”

Jacobs is in his first season as the Pirates’ head coach, but he was a member of the Crawford coaching staff for 20 years before that. His sons, Tanner and Brock, were part of the Pirates’ tradition, so he knows how influential one kid looking up to another can be.

As the Pirates prepare for the state semifinals, that’s a big factor in their favor.

“It’s something that’s ingrained in the minds of the kids this year, they want to experience the same kind of success, but they understand what kind of work it takes to have that success,” Jacobs said. “They saw it first hand with their older brothers.”

The Jinx Tucker is a team award, but sometimes an individual can embody the spirit of all the players around him.

It’s standard basketball protocol that when someone takes an outside shot during a shootaround or warmups and makes it, you give him his “chan…

Lorena finds the range to separate from Riesel, 64-45

Dawson ISD is in the market for a new head football coach and athletic director, as Ronnie Striplin announced that he’ll step down from those …

Crawford senior Garrett Pearson carries the school's flag as he leads the team onto the field for the regional final game versus Bosqueville last week.

Crawford stands on the cusp of a state championship game berth if it can get past Post in Thursday's state semifinals.

Crawford quarterback Tanner Merenda sprints past the Bosqueville defense to score in the first half of last week's regional final.