TROY — It was a fascinating time in Central Texas last fall if you were a fan of star running backs.

Connally blazed a trail behind Jay’Veon Sunday. Bruceville-Eddy gave the rock to Nathan Quattlebaum and got the heck out of the way. Mart followed Roddrell Freeman to yet another state championship.

It was the kind of year where the two running backs that made second-team Super Centex — Midway’s Will Nixon and Bremond’s J.T. Anthony — combined for more than 4,000 rushing yards.

But the Super Centex rushing champ and the Offensive Player of the Year came from Troy. Trojans running back Zach Hrbacek ran for 2,746 yards and 36 touchdowns.

He helped Troy to its best season in school history as the Trojans traveled to the fourth round of the playoffs. In the process, he rushed for 280 yards in a knock-down-drag-out 9-7 victory over Whitney in the third round and 221 as Troy ultimately fell to eventual state champion Grandview on the first Friday night of December.

And he’s back for more.

“No one is ever satisfied when you lose in the fourth round when you’re two games away from playing in Jerry World,” Hrbacek said, referring to the Trojans’ quest to reach the state championship game at AT&T Stadium in Arlington, home of the Dallas Cowboys.

Hrbacek made it known that his goal was to hit 3,000 yards in 2019. That number seemed untouchable, even when he passed 1,000 in early October. Looking back, if Troy could have found a way to knock off Grandview, it’s likely he would have made it.

“Getting 3,000 yards was a big goal, but a lot of it came down to when we’re blowing out a team, if I choose to stay in I might get hurt and risk a whole season,” Hrbacek said. “I stayed unselfish and I know my teammates were proud of (my season-ending rushing total).”

Going into his senior season, the Troy star ball carrier has more than 5,000 career rushing yards in his back pocket. He led the Trojans with a little more than 500 as a freshman, then erupted for 2,045 as a sophomore in 2018.

Hrbacek made his college decision last week, committing to Sam Houston State. However, he doesn’t seem to be taking his foot off the pedal going into the fall.

If he gets close to his goals, he’ll blow past 7,000 career rushing yards.

“It’s still 3K and 35-plus touchdowns,” Hrbacek said about the bar he’s set for this season.

At this point of the summer, looking forward to what might develop on the football field causes a twinge in the gut. High school football coaches and players are headed to practice every day knowing that one positive COVID-19 test could interrupt everyone’s plans.

Even so, the Trojans are bravely looking ahead. Hrbacek has four experienced offensive linemen ready to open up running lanes.

“We’ve got a chance to be the best up front that I’ve ever been in 19 years of coaching with a career-type tailback,” Troy coach Ronnie Porter said. “It’s real exciting to think about. This is a year that you prepare for.”

To watch Troy’s first-string offense and defense face off in practice, going full speed, is a reminder of the intensity of the game that Texans love so much. But even within a program that’s rising to be one of the area’s powerhouses, there’s something different about the way Hrbacek carries the ball.

At 5-foot-7, 170 pounds, he’s not bigger than many of his teammates. But he won’t be stopped. He pushes toward the goal line on every play and crosses it pretty often.

“I’ve been in Troy my whole life and I’ve kind of been the superstar, people say,” Hrbacek said. “But I still get in it every day and I’m ready to compete at a higher level and have a lot of competition in front of me (at Sam Houston).”

A few Ivy League programs came calling, wanting to woo Hrbacek to the hallowed hallways north of here. But his top choices were Texas schools and ultimately he liked the plan Sam Houston has to use him as a slot receiver/running back hybrid.

Beyond college, Hrbacek is considering a career as a coach. If he follows that path, his high school career has already prepared him for dealing with media members.

He was a shy, soft-spoken kid through the middle of last fall. But he’s worked on that part of his game.

“I’ve kind of just accepted it that I can’t run away from it,” Hrbacek said.

“So I decided to try to just get good at what I’m saying and be natural with my words.”

The actions — running away from defenders and toward the goal line — well, that part comes naturally.

In Belton, the Salado Eagles countered prolific Troy running back Zach Hrbacek with plenty of big plays of their own at Mary Hardin-Baylor’s C… 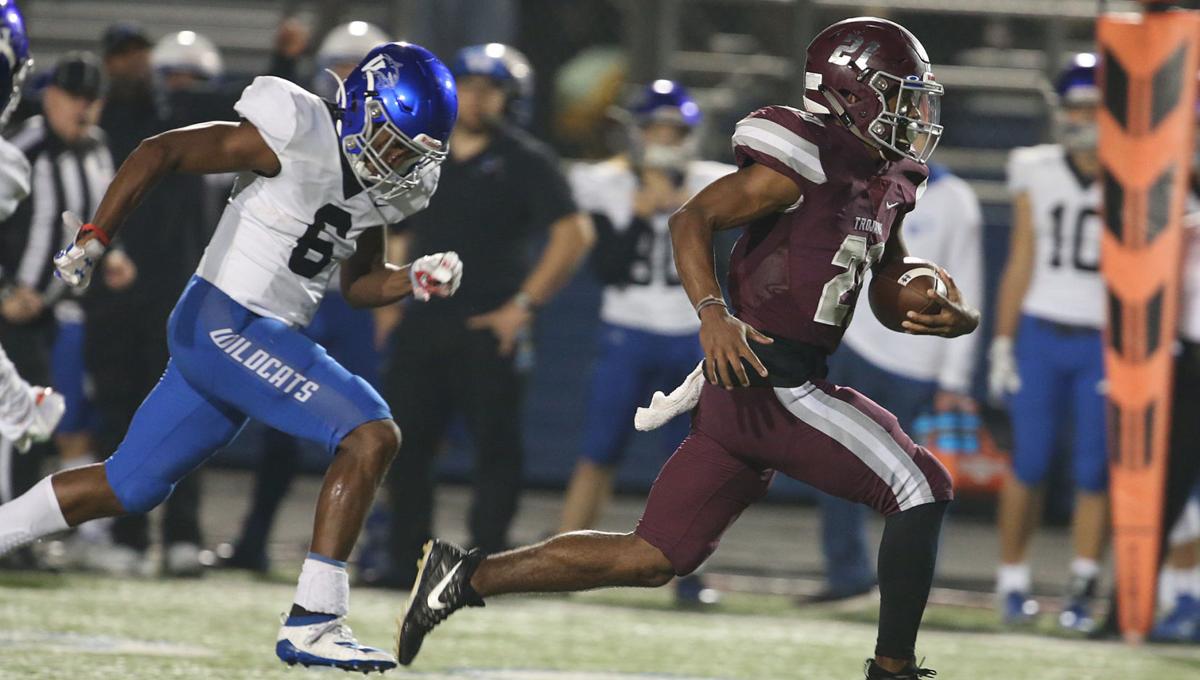 Zach Hrbacek posted 280 rushing yards in an instant playoff classic last November to propel Troy past Whitney, 9-7, en route to the regional final and the best season in school history. 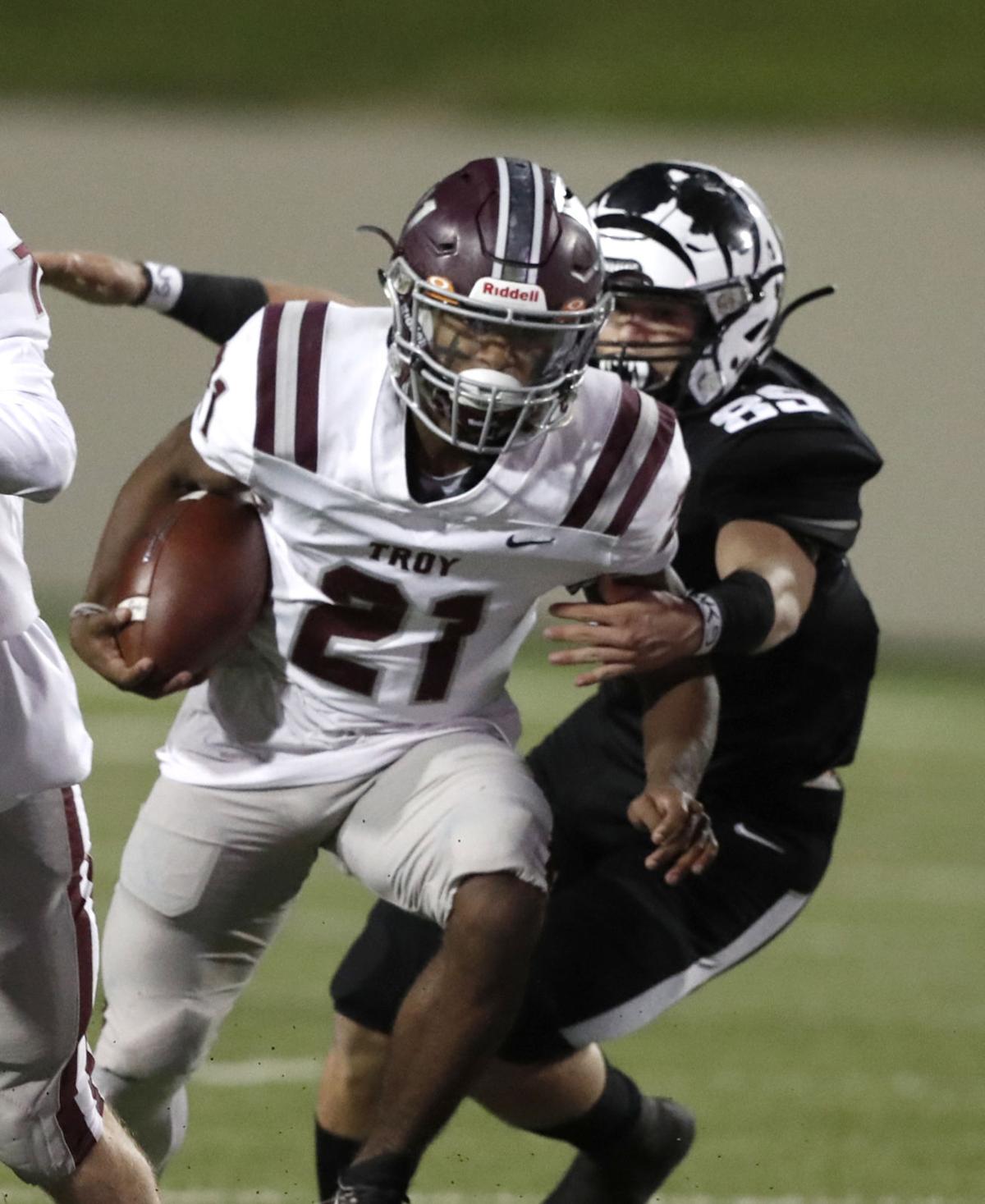 Troy RB Zach Hrbacek escapes from a Grandview defender during the final game of the 2019 season. The senior tallied 2,746 yards rushing last year and has his eye set on 7,000 for his career.