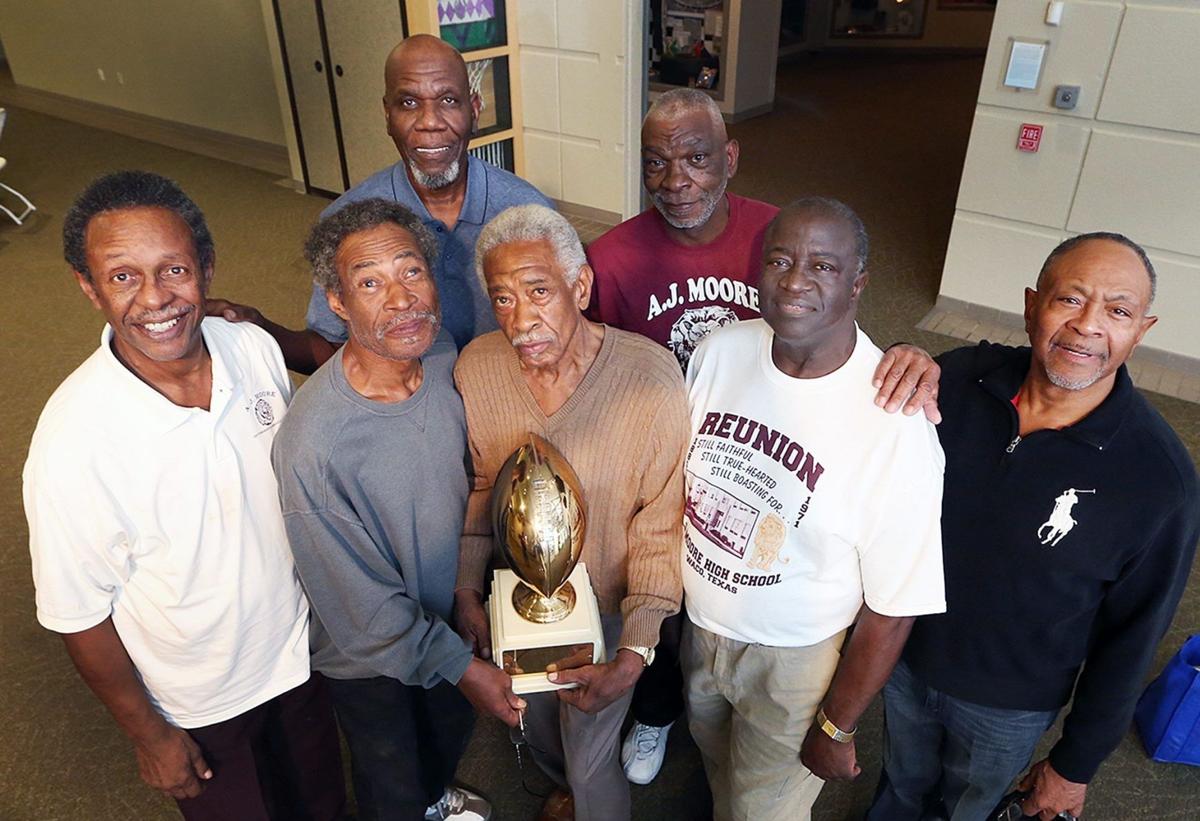 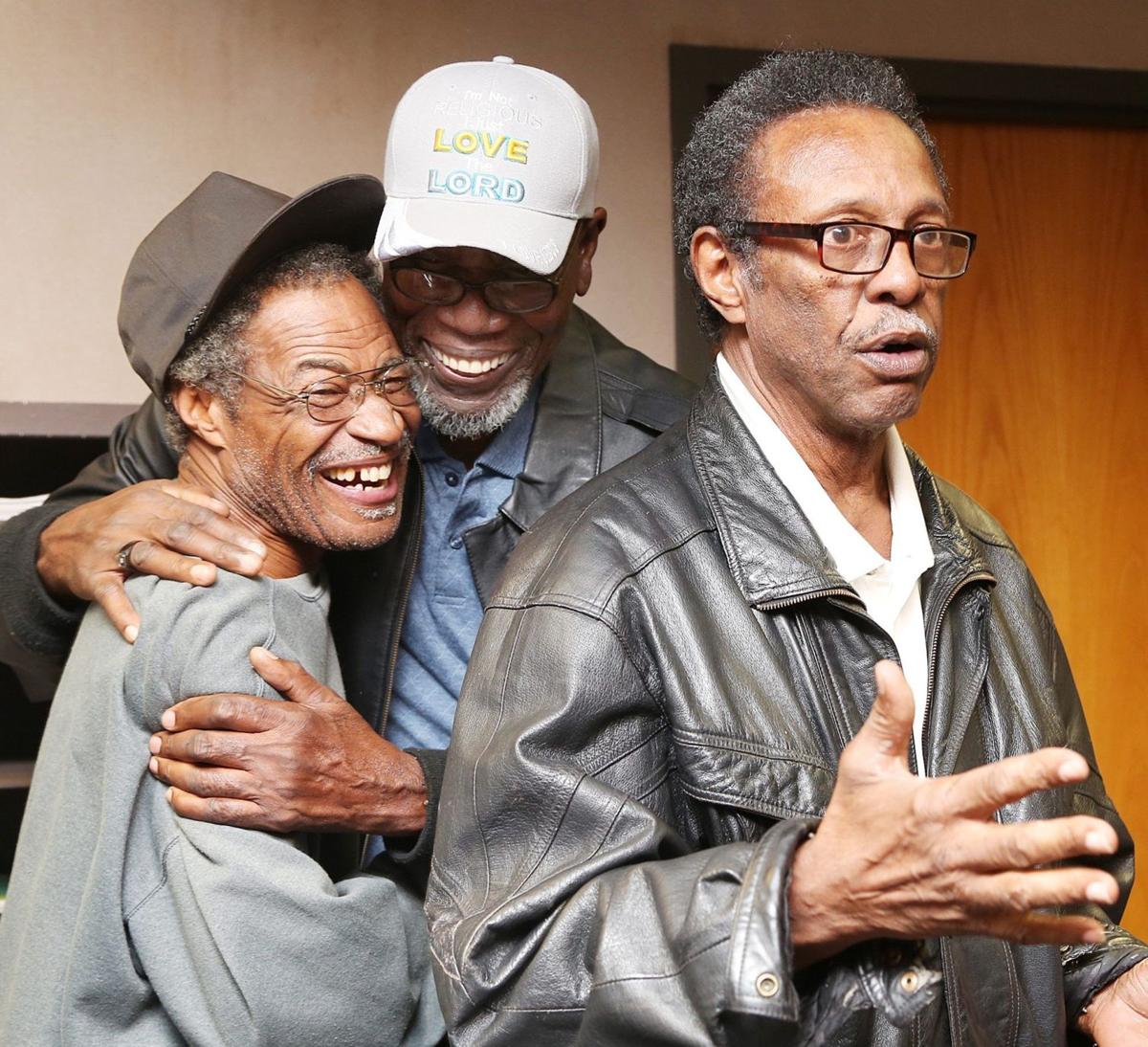 During the summer of 1964, the landmark civil rights act was passed that outlawed discrimination based on race, color or national origin.

It would be seven more years before Waco schools integrated. Change was in the air, but the African American football players at A.J. Moore High School were focused on the task that stood in front of them that summer.

Every player on that team believed they could win the Prairie View Interscholastic League Class 4A state championship. Then they went out and did it with a 16-14 win over Houston Yates.

No Waco public school has won a football state championship since that fall 50 years ago.

“It was an exciting moment, a feeling that you never forget,” said defensive back Clyde Foster. “It was like winning the Super Bowl. I don’t think there will ever be another coach like Coach Ritcherson and the love he had for that team.”

L.H. Ritcherson was already legendary long before the summer of 1964. After returning to coach his alma mater, he led Moore to a state championship in 1952 and co-championships in 1951 and 1960. Players knew he demanded a lot from them on and off the field, and they didn’t test his authority.

“We didn’t need no-pass, no-play,” said linebacker Anthony Fulbright. “Everybody knew that if you didn’t pass, you didn’t play. He was a disciplinarian coach and you either did it his way or didn’t play. It didn’t go any further than that.”

Knowing the difficulty of Ritcherson’s practices, the players prepared for them by organizing unofficial workouts throughout the summer without the supervision of the coaches. They also lifted weights in an era when it wasn’t widely part of the regimen of high school football programs.

“We practiced every week of the summer, playing flag football,” Fulbright said. “We’d go over to the YMCA and lift weights. We had a couple of guys lifting 500 or 600 pounds. When Coach Ritcherson called us together for fall practice we were already in shape.”

That didn’t keep Ritcherson from working his players tirelessly in the Texas summer heat. Now 88 years old and living in Madison, Wis., Ritcherson believed that if he pushed his players to the brink during the summer they’d be able to handle anything when the games were played in the fall.

“When I first got to Moore, I had so many other schools writing me for games,” said Ritcherson who compiled a 132-58-3 record from 1950-65. “Everybody wanted to play us because it was a sure win for them. I instilled in those young men that if they wanted to be good in life, they had to be good in what they attempted to do. They had to work hard to be successful.”

Practices were so rough that the players couldn’t wait to get into games.

“Coach Ritcherson was an absolute disciplinarian,” said receiver James Jones. “Back in our day, coaches were very physical with us. But we had the best conditioned team I ever played on. We always knew we were one of the toughest teams regardless of size.”

While many teams used run-based attacks, the Lions ran a pro-style offense that featured quarterback Lewis Ritcherson’s passing and running abilities. Ritcherson’s football knowledge was considerably beyond his years since he grew up studying game film with his father.

“I remember watching film even before I started playing varsity football,” Ritcherson said. “I knew a lot of stuff and the plays, so it was an advantage.”

Ritcherson had a lot of fast and athletic players surrounding him like receiver James Jones, tight end Arthur Ganious and running backs Larry Walker and George Danford. The offensive line was led by all-state player James Gregory, who was huge for that era at 225 pounds.

“We went to the pro-style offense and we passed and ran equally,” Lewis Ritcherson said. “We had good receivers who were tall and backs who could catch the ball. We had some unusually big linemen for that day. They wouldn’t be considered big now, but they were big then.”

After playing solid football throughout non-district play, the Lions won its district with a 4-1 record. Moore delivered one of its best performances of the season in bi-district by rolling past Tyler Emmett Scott, 46-8, to advance to the state championship game against Houston Yates.

The state championship was in Yates’ backyard at Jeppesen Stadium in Houston, and the Lions were wide-eyed as they rolled into the city.

“We got to Houston and it was such a gigantic city, and we were from little old Waco,” Jones said. “To go into a stadium of that magnitude was kind of intimidating. But we felt we were equal to anybody in the state. We knew no one was better conditioned or cohesive as we were.”

Yates scored the first touchdown but the Lions struck back in the second quarter with Ferrell’s 54-yard punt return for a touchdown. After Yates took a 14-7 halftime lead, Ritcherson scored on a 1-yard run in the third quarter. But the Lions missed the extra point as Yates went into the fourth quarter with a 14-13 lead.

Yates had an explosive offense, but the Lions surprised them by switching from a 6-2 to a 4-4 defensive alignment.

“Coach Maurice Dawson was the architect of our defense and we kept them confused the entire game,” Fulbright said. “It was one of the worst games our offense played all year and best the defense played.”

The game was physical and muddy, and the Lions knew they had to depend on their extensive conditioning to pull it out in the fourth quarter. After the Lions drove to Yates’ 15-yard line, the players were stunned when Coach Ritcherson sent the field goal unit on the field.

“We had never kicked a field goal before,” Lewis Ritcherson said. “When he sent that in, I was looking at him like, ‘Are you kidding?’ Everybody was stunned a little bit.”

Jones booted the ball high and it fell over the crossbar to give the Lions a 16-14 lead.

“We had a square-toed shoe for kicking that was a size 10,” Jones said. “I wore a size 11. I didn’t have the opportunity to put on the square-toed shoe. When I kicked it and the ball went over, I heard a roar.”

Yates still had a chance to win the game, but Dooley intercepted a pass to finish it off.

“Time was running out and they threw to Clyde (Foster’s) side of the field,” Dooley said. “I shot over there and jumped with my basketball skills and caught the ball. There were about three minutes remaining and our offense ran out the clock.”

As the final seconds ticked off the clock, Lewis Ritcherson remembers how elated he felt. While his dad had experienced state titles before, this was his first and only one as a player.

“When the clock was running down, I remember looking over and seeing the coaches jumping up in the air,” Ritcherson said. “State championships don’t come every year. It was a special time and a special feeling.”

After the season, the Lions got a treat when Cleveland Browns All-Pro running back Jim Brown spoke to them at the Waco Chamber of Commerce banquet.

“I was in awe,” said offensive lineman Elroy Cross. “Back then you didn’t get opportunities to meet pro athletes. He was down to earth but eloquent. He said football isn’t going to last forever and there are better things out there. He said he faced a lot of adversity but he didn’t quit.”

Many of the Lions from that 1964 team played college football. L.H. Ritcherson became an assistant coach at Wisconsin in 1966 and Lewis Ritcherson joined him there as a player. Though Ritcherson left coaching in 1971, he’ll never forget the feeling of winning that last state championship at Moore High School.

“We weren’t afraid to play anybody,” Ritcherson said. “I still keep in touch with the players on that team. It’s one of the most cherished memories I’ve had in my whole life.”

Every Centex team to win a state football title: