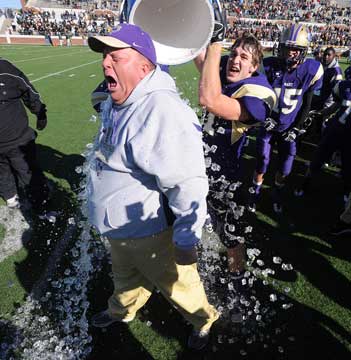 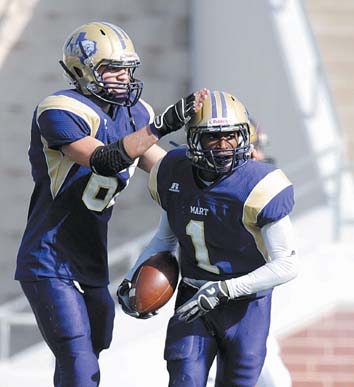 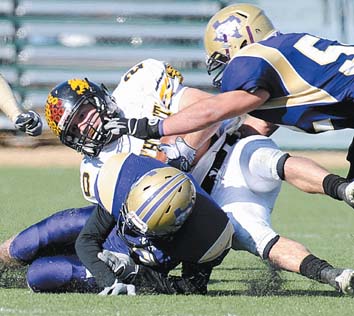 It was no different Saturday on the biggest stage, the Class 1A Division I state championship game, only this time the big play went Mart’s way.

T.J. Justice returned a Goldthwaite fumble 68 yards for a touchdown just before halftime to give the Panthers a lead they never relinquished en route to Mart’s fifth state crown, a 28-7 decision at Vernon Newsom Stadium.

“That was huge,” Mart coach Rusty Nail said. “Every game between us, the momentum-turner was a turnover. When we went to their place this year, we had two interceptions in the second half that turned (momentum) over. That’s . . . what turns football games between two great programs.”

The championship completes a two-week redemption tour for the Panthers (13-2), who avenged a loss in the 2008 1A Division I state title game to Canadian in last week’s semifinal. Goldthwaite (12-3) had twice gotten the better of the Panthers in the last two years, including a come-from-behind, 29-23 victory on the Eagles’ home field earlier this season.

It’s Nail’s second title, adding to the one he claimed in his first year as Mart’s coach in 2006. He said he’d savor this one more, though, mostly because he’s coached these players for five years and has established a stronger bond with them.

“It’s sweeter because of not only that, I’ve matured as a coach and learned how to enjoy this,” he said. “I’ve learned how to appreciate the fact that people play and coach their entire life and don’t get the opportunity to do this one time, and I’ve been blessed enough to do this (have a shot at a title) five times in the last 10 years.”

For a moment, it looked as if the Panthers would go into halftime trailing.

Goldthwaite running back Jonathon Williams was wide open on a throwback pass and had a clear path to the end zone. Only Mart’s Hunter Dawson had even a slight chance to catch Williams, but he was blocked from behind.

That brought back what would have been a 49-yard touchdown pass, and two plays later, the Panthers made the Eagles pay for their mistake. Cody Cobbs got to Goldthwaite quarterback Tyler Horton, who was rolling to his left, before he could get rid of the ball and jarred it free.

Justice scooped up the loose ball and had nothing but green between him and the goal line for the touchdown, which came with only six seconds remaining in the half.

The forced fumble was part of a huge day for Cobbs, who recorded 2 1/2 sacks and took home defensive MVP honors.

“Cody was outstanding,” said Mart defensive coordinator Colby Witt, who also won a state championship with the Panthers as a player in 1999. “He’s a kid that’s 150 pounds soaking wet, and he just works. He’s a tenacious, fiery little guy that is going to get after you. . . . I can’t say enough about his effort and the way he’s played for the last two years. It was good to see him get some recognition finally.”

‘A matter of relaxing’

Mart’s defensive score came on the heels of its offense finally getting jump-started.

The Panthers hadn’t so much as picked up a first down until Holden Strunck carried for a 6-yard gain on third-and-5 after a Mart timeout with 5:54 left in the first half.

That play seemed to calm the Panthers, who also picked up first downs on another Strunck keeper, this one on fourth-and-1, a 17-yard pass from Strunck to Sean Jennings and a 13-yard Jakeem Hoffman run that moved Mart inside the Goldthwaite 10.

Two plays later, Hoffman slipped through a small crease on the right side of the line and struck paydirt on a 7-yard trot to even the score at 7 with 1:33 to go before halftime.

“It was just a matter of relaxing,” Nail said. “Some of them had been here, some of them hadn’t. But they wanted it bad, a group of 18 seniors, and we were a little tight early offensively. Once we relaxed, we started executing.”

Adding to its lead

On the Panthers’ second drive of the third quarter, the senior running back slipped through a hole, worked off a nice downfield block from Dawson that allowed him to get to the sideline and blazed past the rest of the Goldthwaite defense for a 59-yard touchdown scamper.

That gave Mart a two-score lead at 21-7 with 4:53 to go in the third quarter and helped Hoffman to a 148-yard day that earned him the nod as the game’s offensive MVP.

“Jakeem knows how to get skinny,” Strunck said. “He can hit the hole, and his speed is what helps him a lot. Any kind of crease and he’s gone.”

On Mart’s next series, Strunck and D’Shun Kinsey put Goldthwaite away for good.

Strunck took the snap and immediately snapped off a pass to Kinsey at the line of scrimmage. Kinsey spun out of a tackle, stiff-armed another defender, then had the only Eagle with a chance to catch him knocked out of the way on a Leonard Williams block and strolled into the end zone for the 48-yard dagger.

That forced Goldthwaite, a team much better suited to play from ahead because of its grind-it-out wishbone offense, out of its comfort zone. The Eagles put together a march, but a Horton pass on fourth-and-15 from the Mart 33 fell incomplete. The Panthers then took almost all of the remaining 5:09 off the clock and began to celebrate when they were finally stopped on a fourth down with nine ticks left.

“It feels like we did everything we were supposed to do,” Mart senior Anthony Martin said. “All the hard work and hard practices came forth, and we’re just happy to come out here and win it all as a team.”

Goldthwaite jumped out to the early lead with a 10-play, 63-yard drive on its second possession for the game’s opening touchdown.

The Eagles converted a third-and-6 with an 18-yard strike from Horton to James Harden, then reached the Mart 17 on a 26-yard Williams run.

Five plays later, Harden crashed into the end zone from two yards out to put the Eagles on the board with 2:38 left.

But that was the only score Goldthwaite came up with, and Mart’s defensive effort allowed its offense time to shake off its early nerves.

Twice in the first quarter, the Panthers faced fourth-and-1 and were poised to go for it before getting backed up by false-start penalties.

Mart also lost a golden opportunity when Strunck was intercepted by Williams in the end zone after a 1-yard Goldthwaite punt set the Panthers up at the Eagles’ 16.

“It’s real frustrating knowing that we needed to sustain drives and keep their offense off the field, especially early,” Nail said. “The kids just overcame, and I can’t speak enough about the effort the kids gave in the second half to run the football and get up by two scores against a ball-control team. That was our key.”

Once the Panthers took the two-score lead they made sure there would be no repeat of the Week 4 tilt between these two teams, when Goldthwaite rallied from a 23-7 halftime deficit for a 29-23 victory.

And the looks on the faces of Mart’s players after the game told the whole story.

In the history of Texas high school football, few places have experienced the level of success that Mart has.