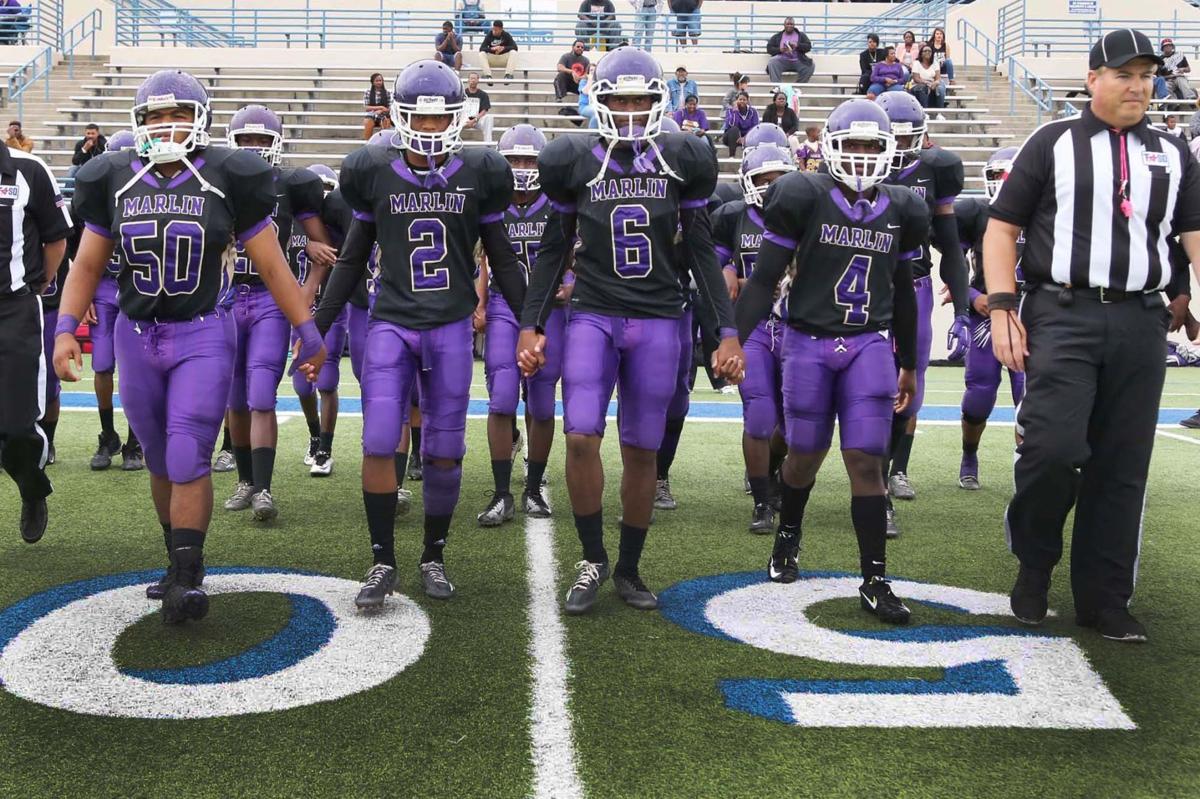 Despite Marlin ISD’s loss of a accreditation, which prompts a potential closure of the district’s schools, the Marlin High football team is playoff bound after going 5-5 this season, including a 4-1 in its last five. 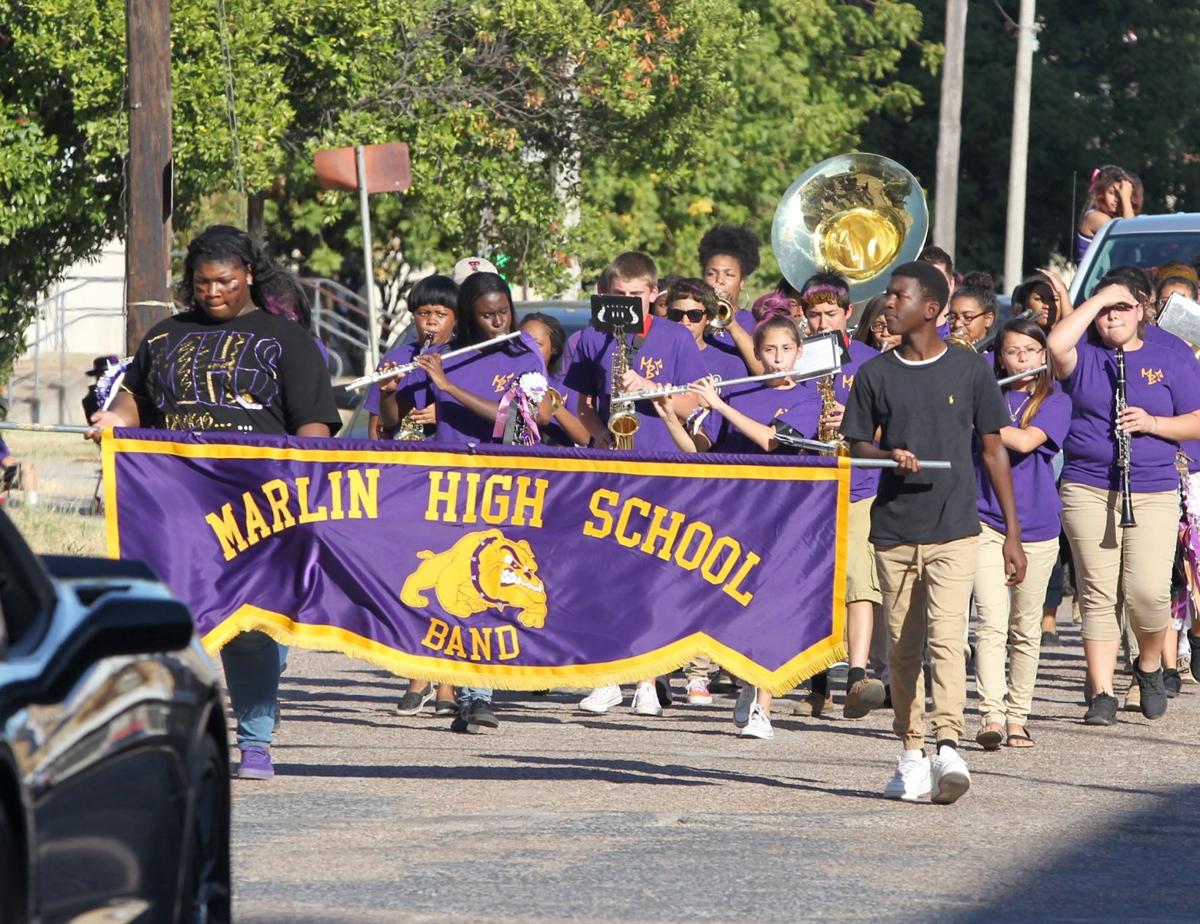 The Marlin High School band plays music as they march down Coleman Street at the annual homecoming parade. 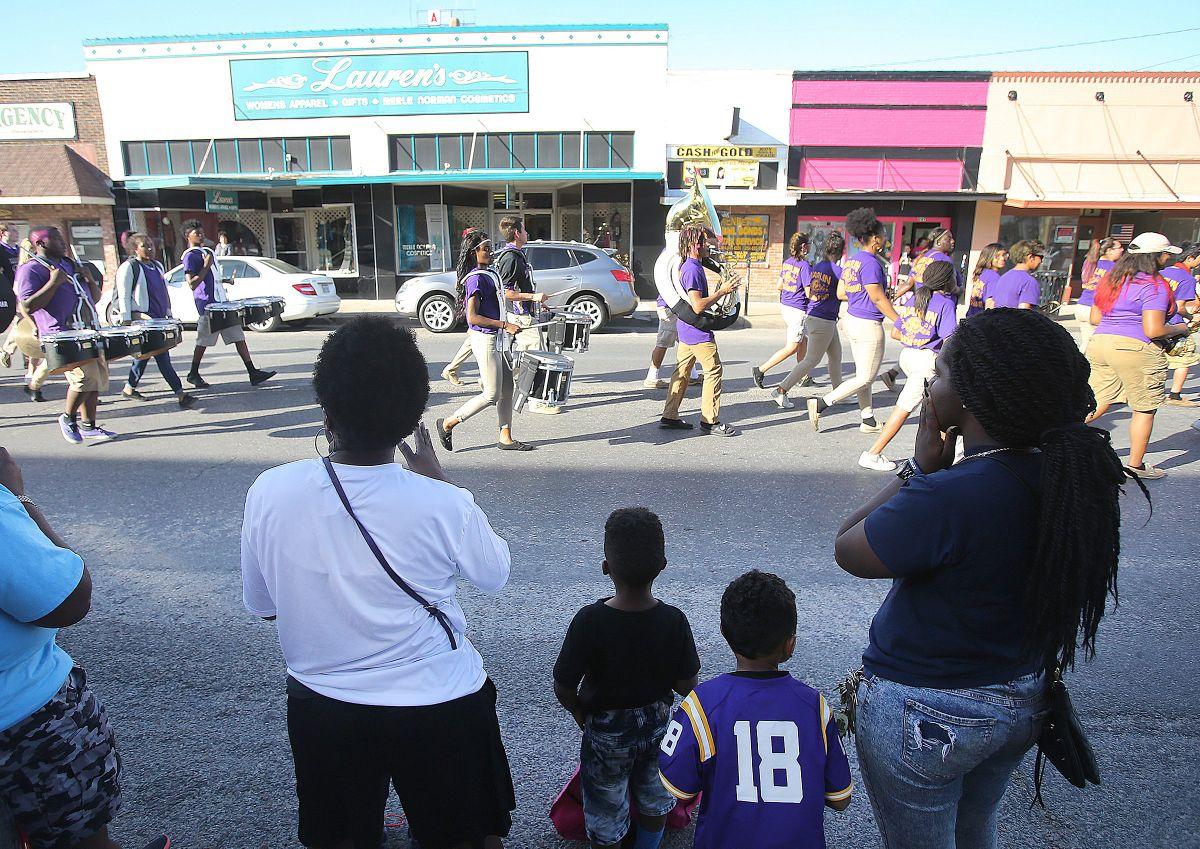 Marlin residents watch as the Marlin High School band plays music as they march down Live Oak street at the annual homecoming parade. 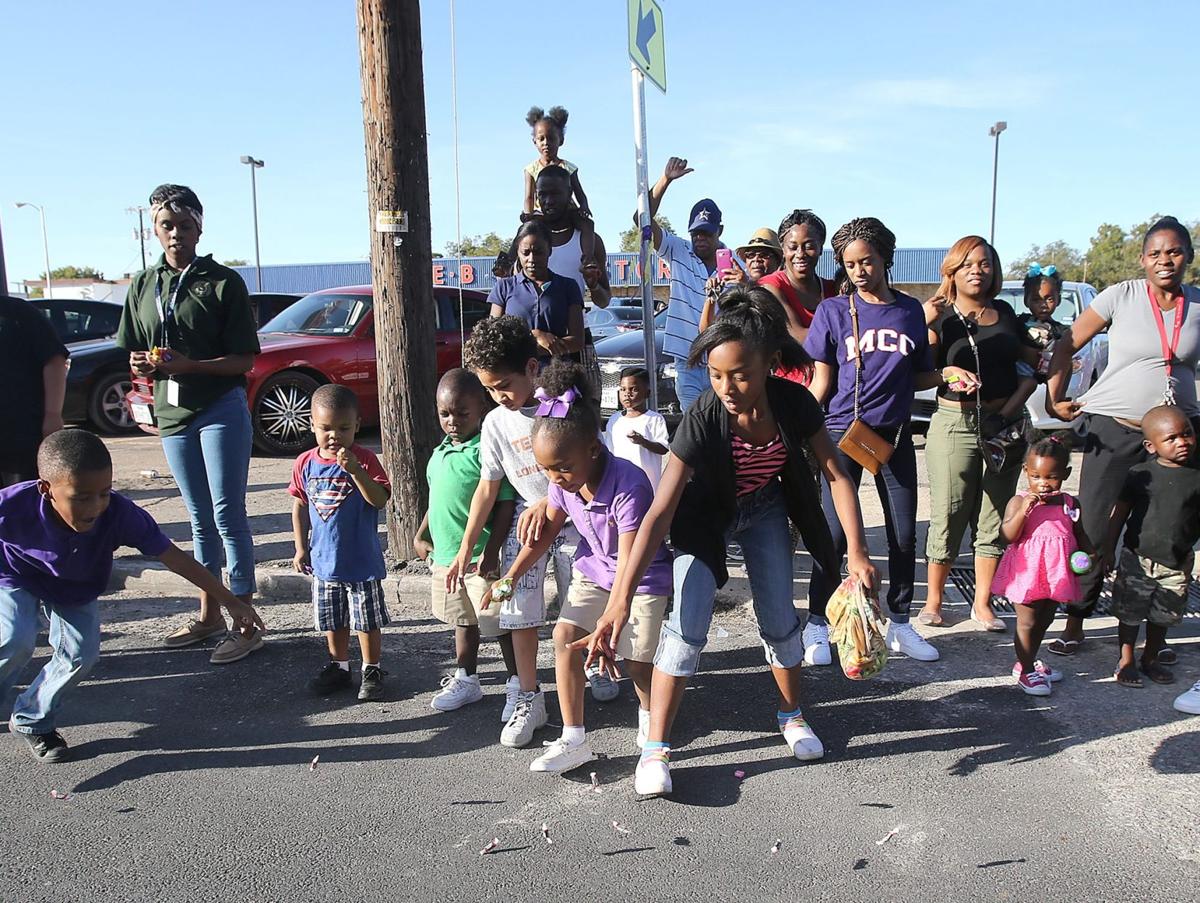 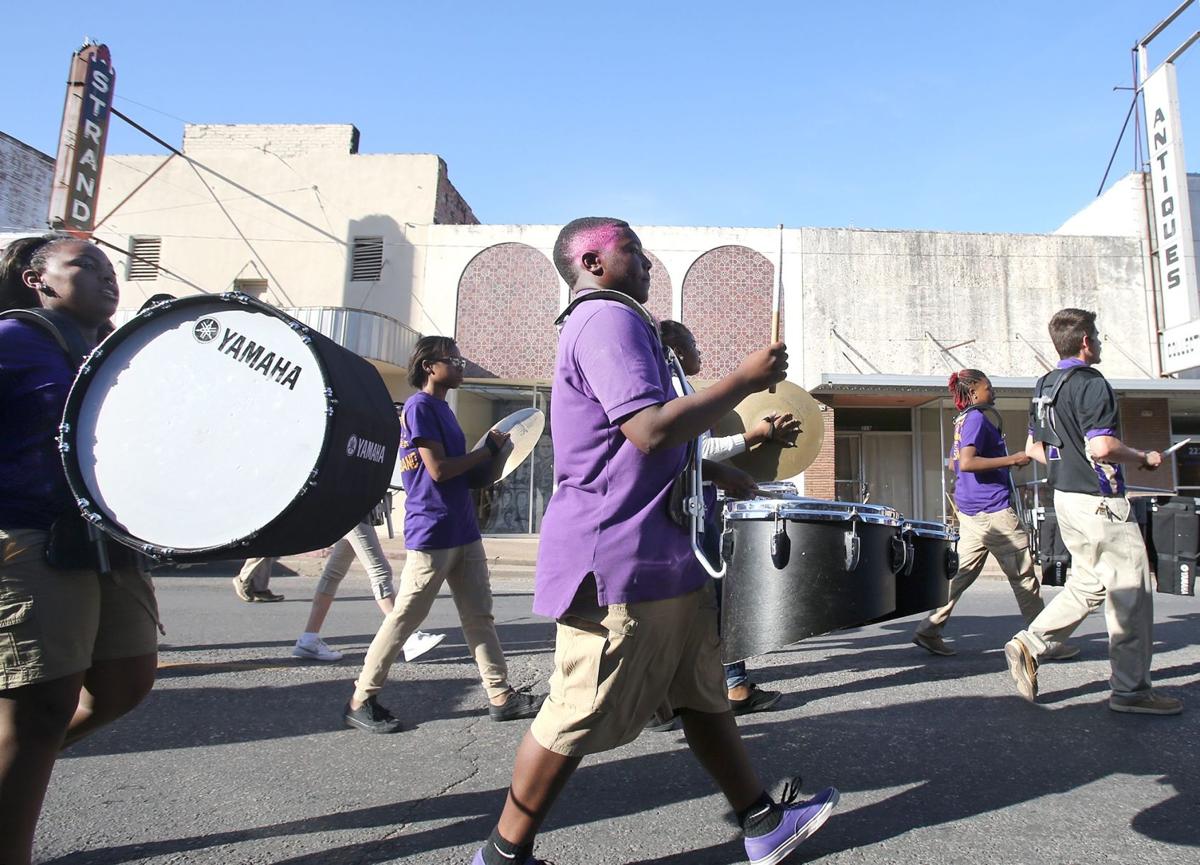 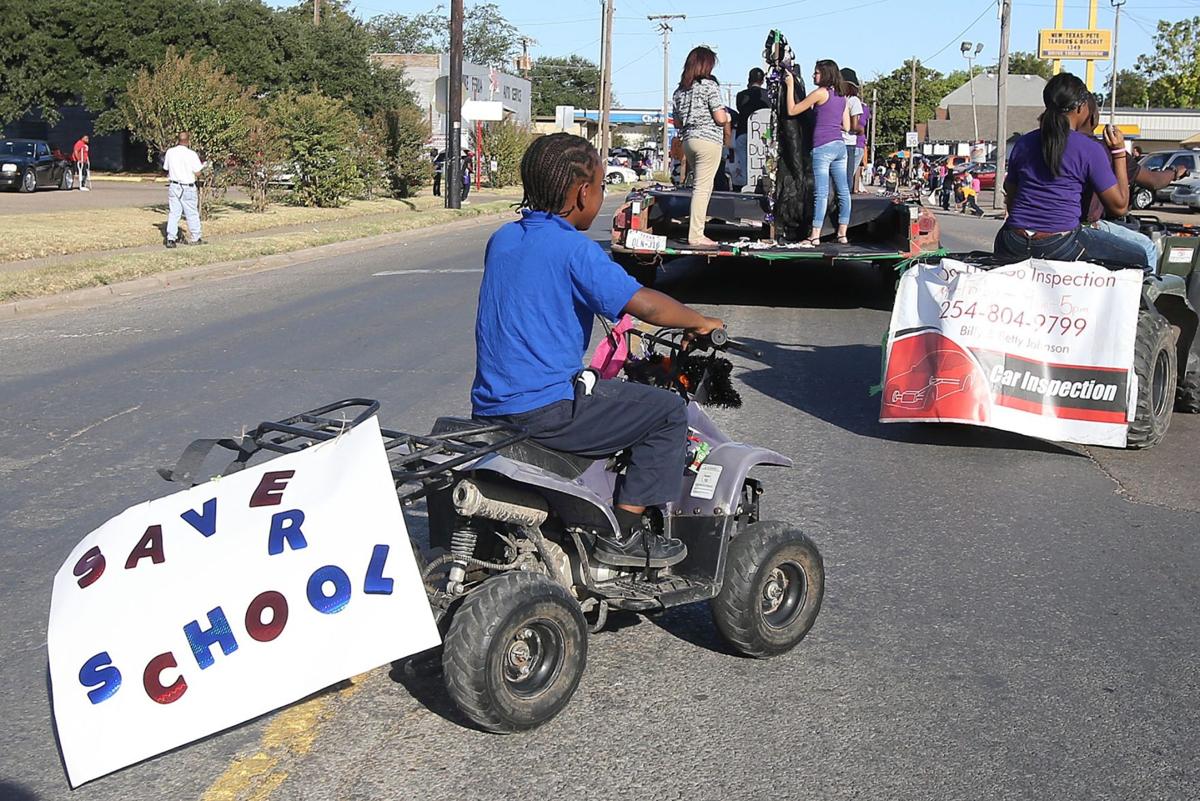 A young boy tows a “Save R School” sign as he takes part in the annual Marlin High School homecoming parade.

The Texas Education Agency revoked the district’s accreditation in late September and announced a plan to close the school district unless it could show significant improvement.

At the same time on the football field, the Bulldogs were going through their own struggles as they concluded their nondistrict schedule with a 1-4 record after blowout losses to Franklin, 57-0, and Garrison, 35-12.

“At the same time is when the letter from the TEA came in,” Marlin coach Bennie Huitt said. “Instead of our kids saying, ‘What are we going to do?’ they said, ‘What can we do as a football team to help?’ because after the letter came out it was like turmoil. People wanted to point fingers. This person isn’t doing their part, they aren’t doing their part, so we though, ‘Hey, to get the community back together, let’s start winning some football games.’ ”

Winning cures most ills on the football field, and it can even lift a community. When Marlin edged Rogers, 17-14, to open district play, it not only kick-started a 4-1 run to a second-place finish and a playoff berth, it helped ease some of the tensions in the school and town.

It was a remarkable run through 10-3A Division II play for the Bulldogs to reach the postseason for the first time in four years as their school continues to fight to stay open. They will begin the Class 3A Division II playoffs against Rio Vista at 6 p.m. Saturday in Alvarado.

How did the Bulldogs manage to put aside everything that was going on around them and make their run?

“Actually we did the exact opposite,” Marlin senior Obi Manigo said. “We didn’t put that aside. We used that as motivation to keep going through the hard practices and the hard game.”

Marlin’s administrators stated their case to the TEA in Austin three weeks ago and came away optimistic they will be able to keep the district open.

There has been no official decision made yet, however, and the Bulldogs are still carrying that weight through the playoffs. But it’s a role they embrace.

“We use it as something to push us forward,” Marlin senior Jarice Stricklin said. “We took it upon ourselves that is starts with us. We said if we get back in the playoffs and if we get a good push in the playoffs, the community will support us and it will see we want to do something great. Once we started winning, the community started coming behind us. We took it upon ourselves that if somebody was going to change it, it was going to be us.”

But to make that happen, Marlin knew it needed to make some changes.

The loss to Franklin was especially eye-opening for the players and coaches. It wasn’t only the lopsided score that the Bulldogs saw as a problem. It was the way they were manhandled.

Huitt thought his team wasn’t tough, and he wrote two words on the board after that game — “Blood Alley.”

It’s a drill similar to the Oklahoma drill in which a pair of linemen on both sides of the ball, a running back and a linebacker line up in an enclosed space. The running back tries to get past the defense and score, and it often leads to intense collisions.

“We were struggling in that aspect of the game, and going back to that was really rough,” Manigo said. “That was the kind of thing we’re used to seeing at the beginning of the season. But doing that in the middle of the season was kind of rough. It’s exactly what we needed, and obviously it helped us out.”

The Bulldogs came out of it a much more physical team, and they have also picked up their conditioning. That’s important, since they only have 24 players on the roster and have faced teams with many more than that throughout the season.

Still, results had to come on the field, and Rogers was first on Marlin’s district schedule. The Eagles had defeated the Bulldogs six straight times, and it looked as if it might go the same way again. That is until Rogers kicked off to Taequan Tyler in the fourth quarter.

Tyler took it back all the way, and the Bulldogs pulled out the victory to get started on the right foot.

“We made it around the corner when we won the first game,” Marlin senior Devlon Noble said. “We’ve been making big differences, big changes. Everything has been completely different. We’ve had trouble with Rogers in the past, but ever since beating them for our first game it was a big change.”

A 20-7 win over Dublin followed the next week and all but clinched a playoff berth with three weeks to go, so even a 28-21 setback to a Jarrell team that ended the regular season undefeated couldn’t derail Marlin.

It rebounded to edge past Clifton, 12-6, in a defensive struggle, and claimed second place in district with a 31-14 defeat of Bruceville-Eddy last week.

“Week after week we started to see that when we played together the only way we could lose was if we beat ourselves,” Stricklin said. “We started making mental mistakes and started telling ourselves we’ve got to pick this thing up, then possibly we could beat ourselves and then we wouldn’t have a chance at playoffs. Once we saw it was all a team thing, we prospered.”

The defense has made the greatest turnaround. A unit that was shredded for nearly 37 points per game in nondistrict play shaved that number down to just a shade less than 14 in district.

Dayecairius Brown is the Bulldogs’ leading tackler with 84, while Alik Brooks has contributed a team-best four interceptions.

Stricklin has helped the offense with 876 yards and nine touchdowns rushing, and Tyler has shown an ability to make big plays in different areas of the game. In addition to the clutch kickoff return, he has 615 yards from scrimmage with longest gains of 73 rushing and 81 receiving.

“The strength of this team is the whole team,” Noble said. “ Everybody has been improving every single day in practice. No matter what the problem was, no matter the difficulty, no matter the hurt, sweat, tears, everything. It’s been a big change.”

Huitt said the biggest difference between this team and those from the past three seasons – all of which finished 4-6 – is senior leadership.

But it’s been a total team effort that has allowed the Bulldogs to enjoy playing deeper into November, and they hope to keep it going as long as possible.

“If you talk to some of my seniors, they will tell you it’s not about them,” Huitt said. “They’re really hurt about the situation, and they don’t want all of this bad stuff going around about our school. It really bothers them as well. They’re getting out (graduating at the end of the year), but it affects them as well. For the underclassmen they follow the leadership of Jarice Stricklin and a lot of the seniors, and they’re really coming on. They want to send those seniors out with a bang as well. With the mix of the young group and the seniors, it’s fun.”

After plunging two games deep in the playoffs last season, Marlin is looking to extend its season much longer this fall.

Despite Marlin ISD’s loss of a accreditation, which prompts a potential closure of the district’s schools, the Marlin High football team is playoff bound after going 5-5 this season, including a 4-1 in its last five.

The Marlin High School band plays music as they march down Coleman Street at the annual homecoming parade.

Marlin residents watch as the Marlin High School band plays music as they march down Live Oak street at the annual homecoming parade.

A young boy tows a “Save R School” sign as he takes part in the annual Marlin High School homecoming parade.