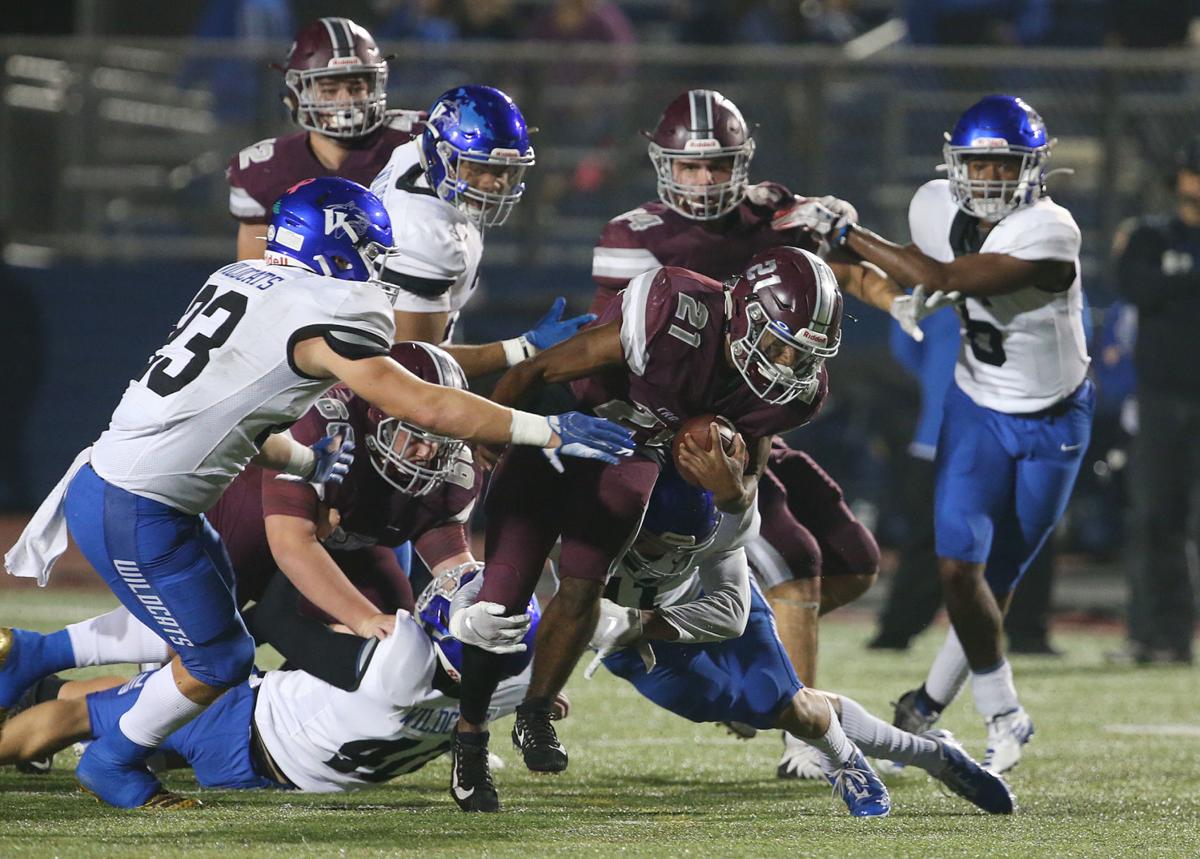 Whitney’s Dawson Hightower, left, grabs onto Troy’s Zach Hrbacek, right, in the first half. Hrbacek ran for 240 yards on 34 carries and scored Troy’s only touchdown. 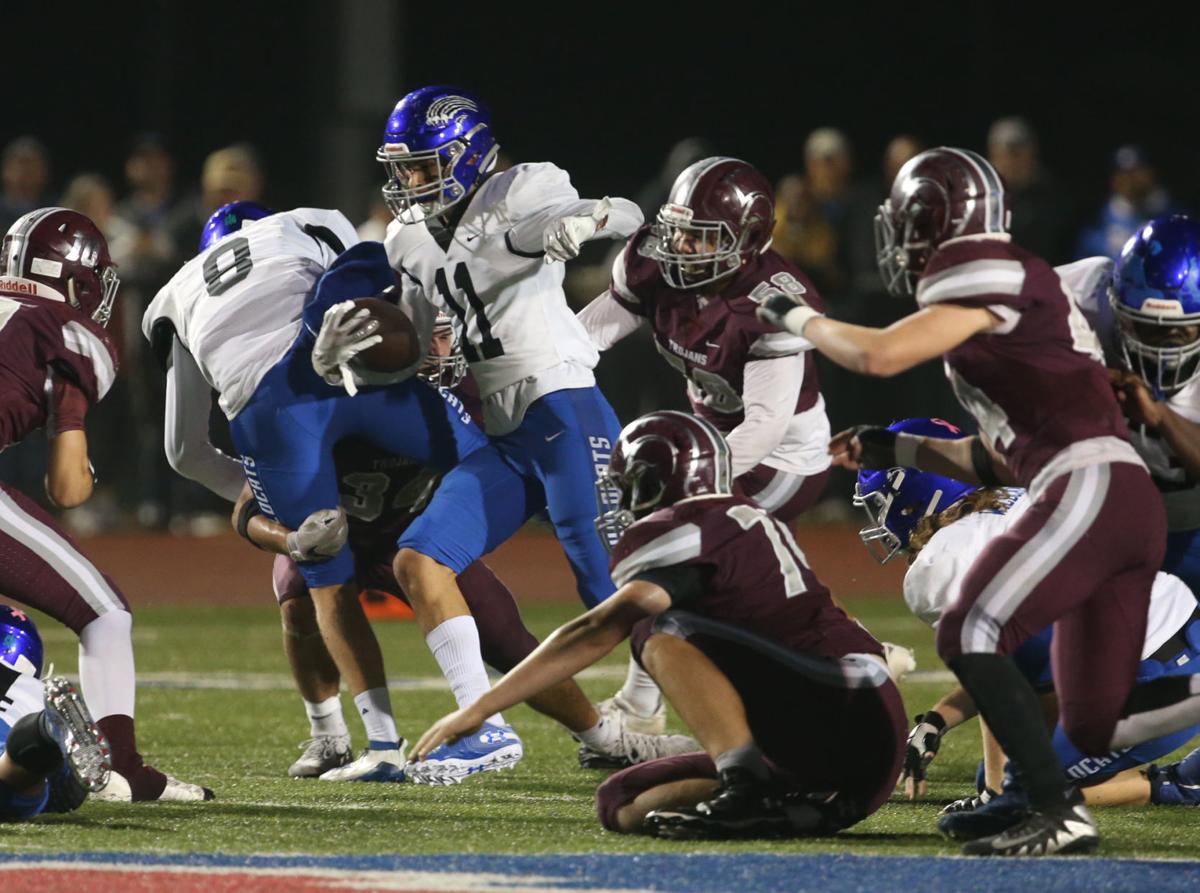 Whitney’s Juan Saucedo looks for running room around the Troy defense in the first half. 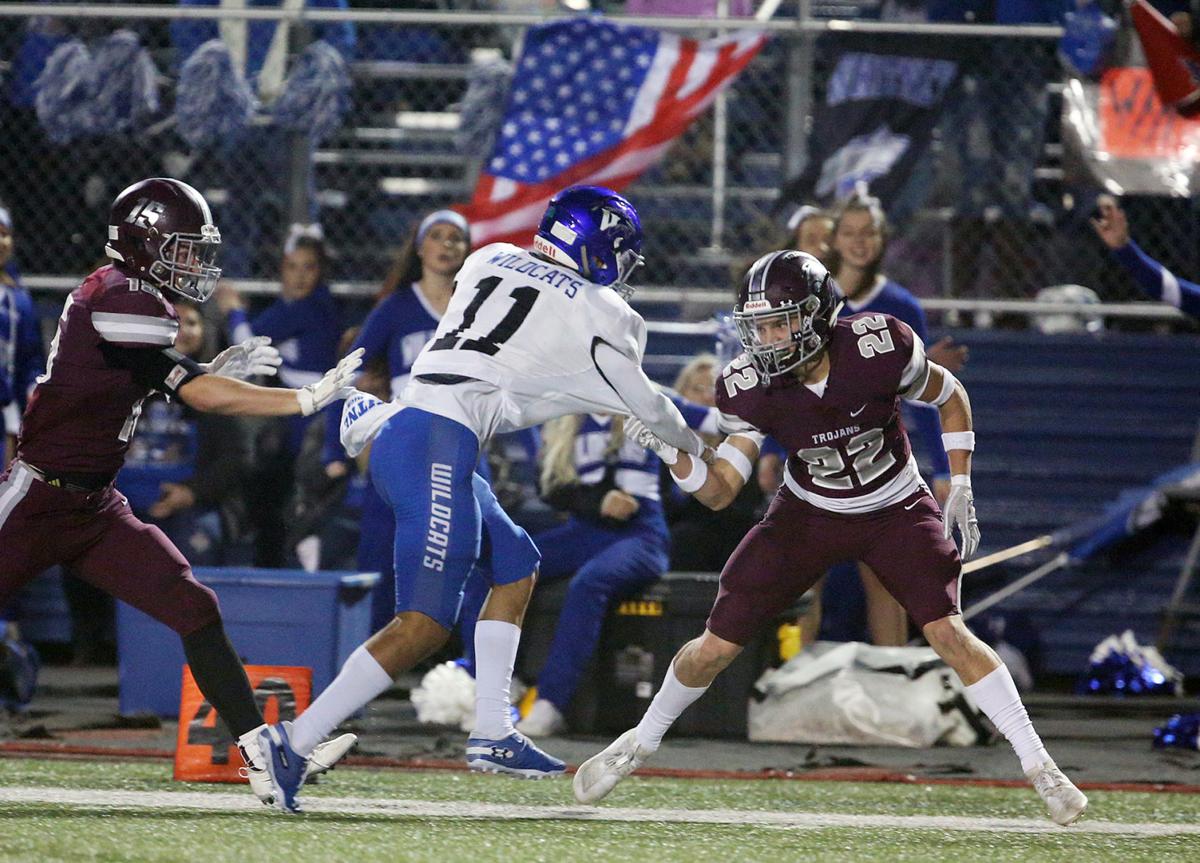 Troy’s Kody Kaminski, right, grabs the jersey of Whitney’s Juan Saucedo after a long run in the first half. 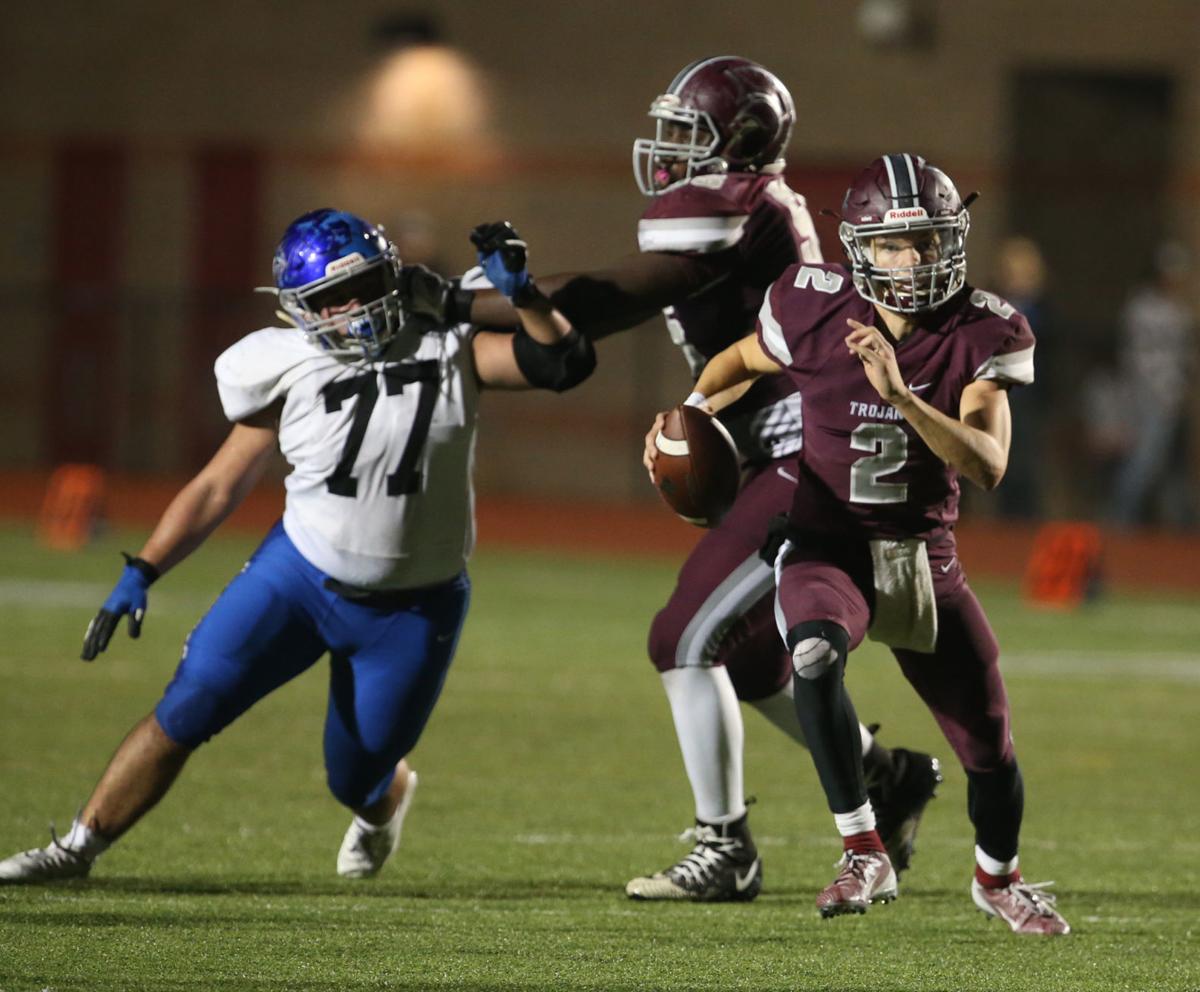 Troy's Ben Presley takes off on a short run against Whitney in the first half. 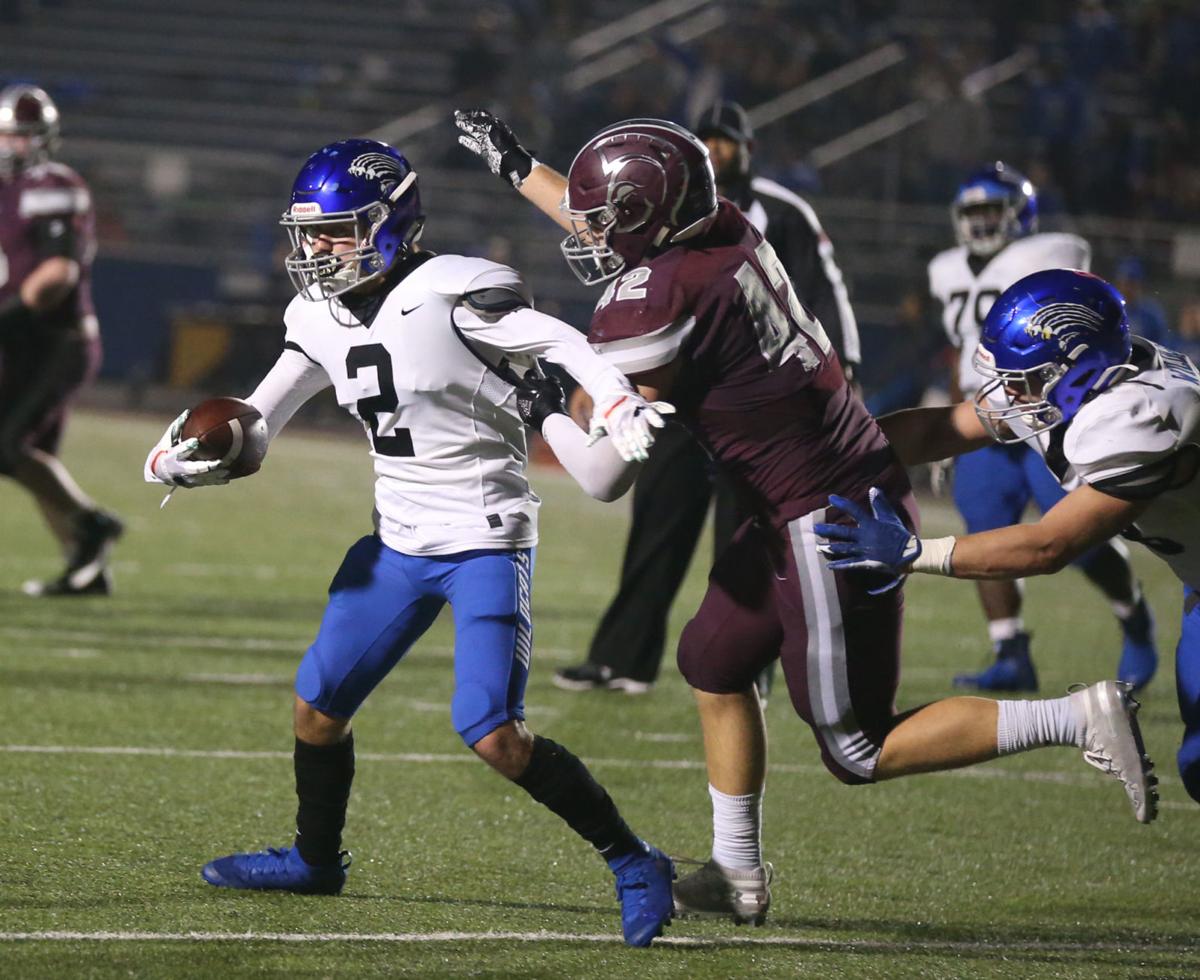 Troy’s Beau Workman, right, reaches for Whitney’s Kolby Tanner, left, after an interception in the first half.

Sometimes it pays to get perturbed.

Such was the case for Troy’s Zach Hrbacek, anyway.

A ticked-off Hrbacek ran with an unmistakable fire, and Troy’s defense came up with the play of the game to propel the Trojans to a 9-7 come-from-behind victory over Whitney in the Class 3A Division I regional playoffs on Friday night at Midway’s Panther Stadium.

With his team down 7-0 at the half after throwing three first-half interceptions, Troy coach Ronnie Porter decided to forgo with the shenanigans and get the ball to Hrbacek as much as possible. One look at his star junior running back’s face told Porter all he needed to know.

“You can see it in his eyes,” Porter said. “Whenever he was coming out, and I asked him, ‘Are you mad?’ And he kind of nodded his head. And I like when he’s mad. He plays a little extra hard whenever he’s mad. So you kind of know that you have that in your back pocket whenever he gets a little upset.”

Hrbacek rushed 34 times for 280 yards and a critical third-quarter touchdown that tied the game. Troy (12-1) advances on to the Region III-3A final to face defending state champion Grandview, next Friday at 7:30 p.m. at Waco ISD Stadium.

Whitney, which was making just its second appearance in the third round of the playoffs in school history, closes out a fantastic season at 11-2.

Given the firepower on both squads, it wouldn’t have been shocking for the two teams to set the scoreboard ablaze with points. Instead, they both showed that they’re tougher than boot leather, as the game turned out to be a grind-it-out defensive battle.

Troy got the ball to start the second half, trailing 7-0 after two quarters of frustration. The Trojans didn’t’ mess around, going 54 yards in just six plays, all on carries to Hrbacek. Frequently the Trojans didn’t even bother with snapping the ball to their quarterback, instead zipping it to Hrbacek on the direct snap.

His 5-yard TD run with 8:24 remaining in the third quarter tied the game at 7.

The Trojans needed only 15 seconds to take the lead. On Whitney’s first third-quarter play, the Wildcats unleashed a wild snap. Running back Juan Saucedo chased the ball down, but was dumped in the end zone by Troy’s Beau Workman for the safety, giving the Trojans a 9-7 lead.

“I felt very fortunate at the half to go in only down by seven,” Porter said. “Because I thought we made a lot of mistakes. We gave them field position in some undesirable areas. So us being able to come out down by seven was huge. Coming back into the half, a heavy dose of Zach and just let them roll up their sleeves and go to work. It ended up being just enough to win. Defense coming through and getting that safety ended up being the difference maker, and my hat goes off to them as well.”

On Whitney’s second third-quarter possession, the Wildcats moved to midfield before stalling and set up to punt. Troy blocked the kick, and one of the Trojans picked up the ball to try to run with it before fumbling it back to the Wildcats, giving Whitney a second chance.

However, the story of the half for Whitney was missed opportunities. Three plays after getting the ball back on the fumble recovery, the Wildcats’ Garrett Peacock was intercepted by Troy’s Kody Kaminski.

“We kind of got handicapped offensively, I thought we’d run the ball better, but we didn’t,” Whitney coach Mark Byrd said. “On a night like tonight, you’ve got to be able to run the ball. Us going back to the pass was not our forte tonight.”

After the pick, Troy managed to bleed off more than six minutes from the clock behind Hrbacek’s steady, chain-moving running. Whitney finally got the ball back with 5:20 to go at its own 12-yard-line. But Troy’s Xaiver Hernandez squirted into the backfield for a gigantic sack of Devin Wilson on third down, and the Wildcats had to punt it away. They ultimately never got it back again. Troy picked up the first downs it needed to whittle away the clock on the win.

Whitney displayed a successful blend of speed, precision and stick-to-itiveness to briskly move down the field on its first possession of the game. The Wildcats scampered 68 yards in seven plays, and Dez Garner put the finishing touches on the drive when he took a pitch, seemed to get stopped, but rolled over the body Troy tackler without touching the ground before returning to his feet to complete an 11-yard touchdown run. That score put the Wildcats up 7-0 at the 9:02 mark of the opening quarter.

Whitney’s Wilson and Troy’s Hrbacek are two of the more accomplished escape artists in Central Texas. They were the fastest players on the field by far, and Wilson’s wheels came in handy later in the half when he ran down Hrbacek from behind after a 57-yard gain to the Wildcat 5-yard-line.

Not only did that impressive chase-down tackle save a touchdown, but Wilson pressed the save button again two plays later. Troy quarterback Ben Presley made a Fran Tarkenton-like scramble to keep a play alive before throwing an ill-advised pass into the end zone, where Wilson was waiting.

The Whitney star made the pick and took off running the other way, and looked to have clear sailing to the end zone before sliding down at the Troy 40 when he spotted an official throw a flag for an apparent block in the back. But after a conference, the officials waved off the penalty, and Wilson could only lament the fact that he didn’t finish off the play by busting it all the way to the end zone. The Wildcats were unable to make anything out of the takeaway, and punted four plays later.

Troy kept Hrbacek well-fed in the first half, but without any points to show for it. Hrbacek and the Trojans regained the ball at their own 25 with 2:12 to go and managed to push the chains all the way to the Whitney 21. With three seconds to play in the half, Troy lined up for a field goal try before the Wildcats called timeout. After that stoppage, the Trojans changed their decision and opted for a pass instead. Presley’s toss into the end zone was a bit of a jump ball, and Whitney’s Kolby Tanner picked it off for his second interception of the game.

Despite the loss, Whitney’s Byrd said he couldn’t have been prouder of his bunch, especially the senior class.

“It’s neat to be a part of, because when I moved out of the Gulf Coast, I didn’t even know where Whitney was,” Byrd said. “I didn’t know the history that this is the second time ever going this far. You really didn’t know what to expect. I just knew I was ready to get out of the Gulf Coast and ready to get back close to some family, and then this thing kind of took off. It kind of re-energized some things about myself that those kids taught me.”

Whitney’s Dawson Hightower, left, grabs onto Troy’s Zach Hrbacek, right, in the first half. Hrbacek ran for 240 yards on 34 carries and scored Troy’s only touchdown.

Whitney’s Juan Saucedo looks for running room around the Troy defense in the first half.

Troy’s Kody Kaminski, right, grabs the jersey of Whitney’s Juan Saucedo after a long run in the first half.

Troy's Ben Presley takes off on a short run against Whitney in the first half. 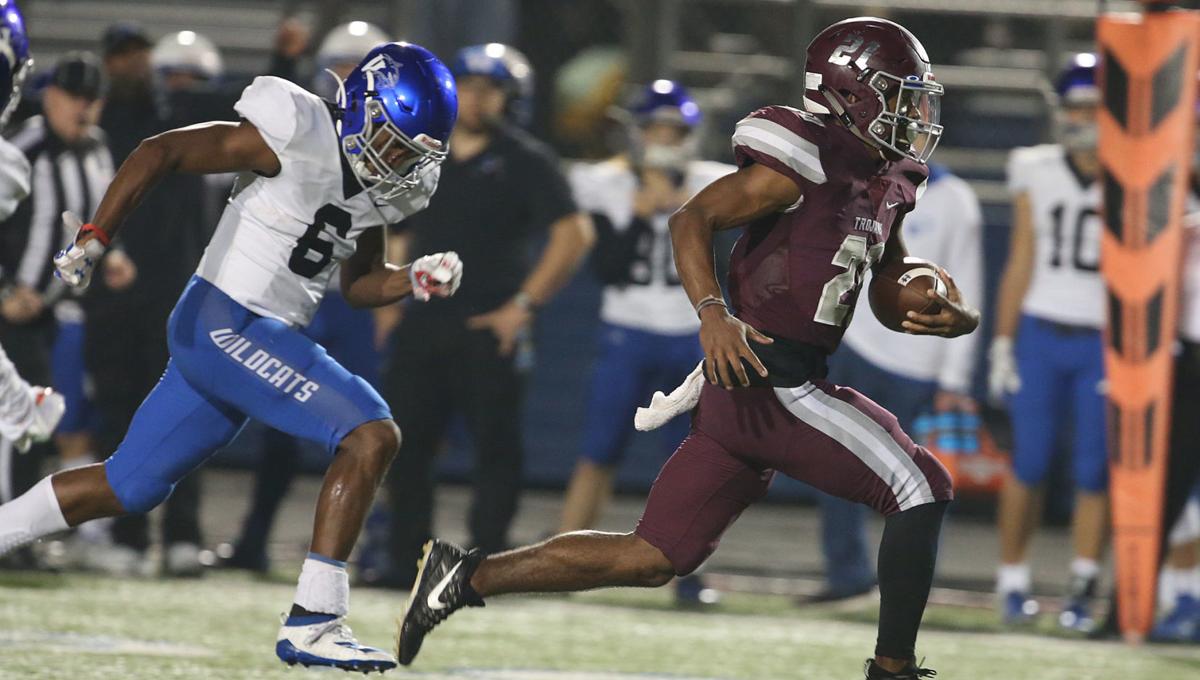 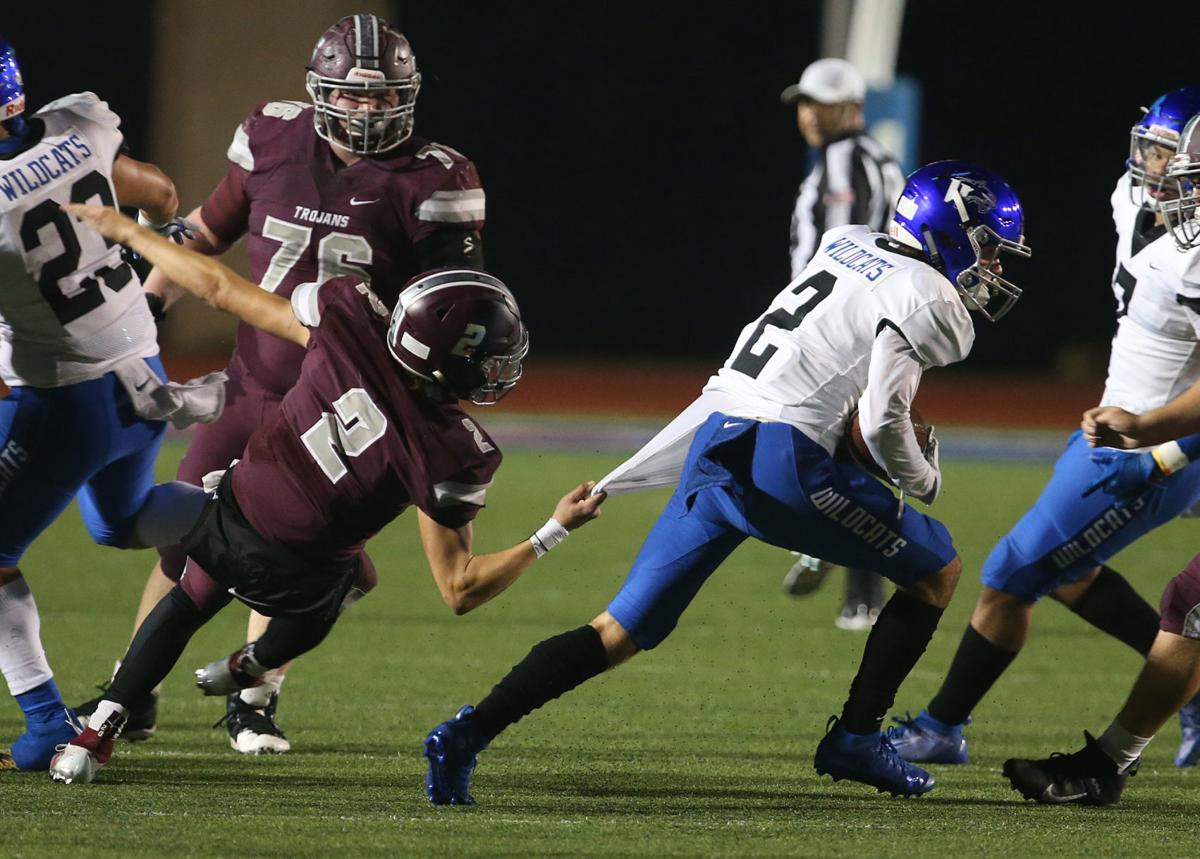 Troy’s Ben Presley, left pulls on the jersey of Whitney’s Kolby Tanner after he intercepted a pass in the first half. 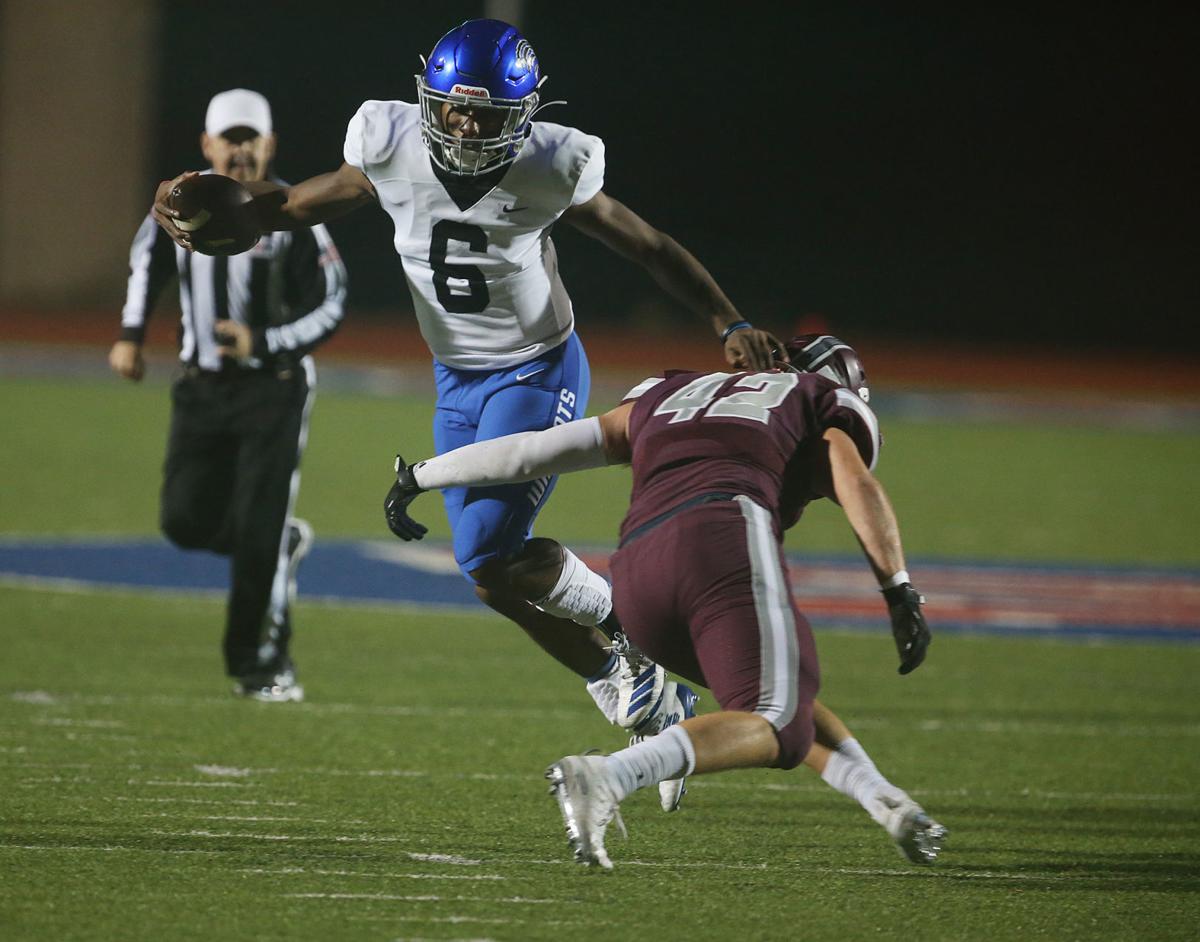 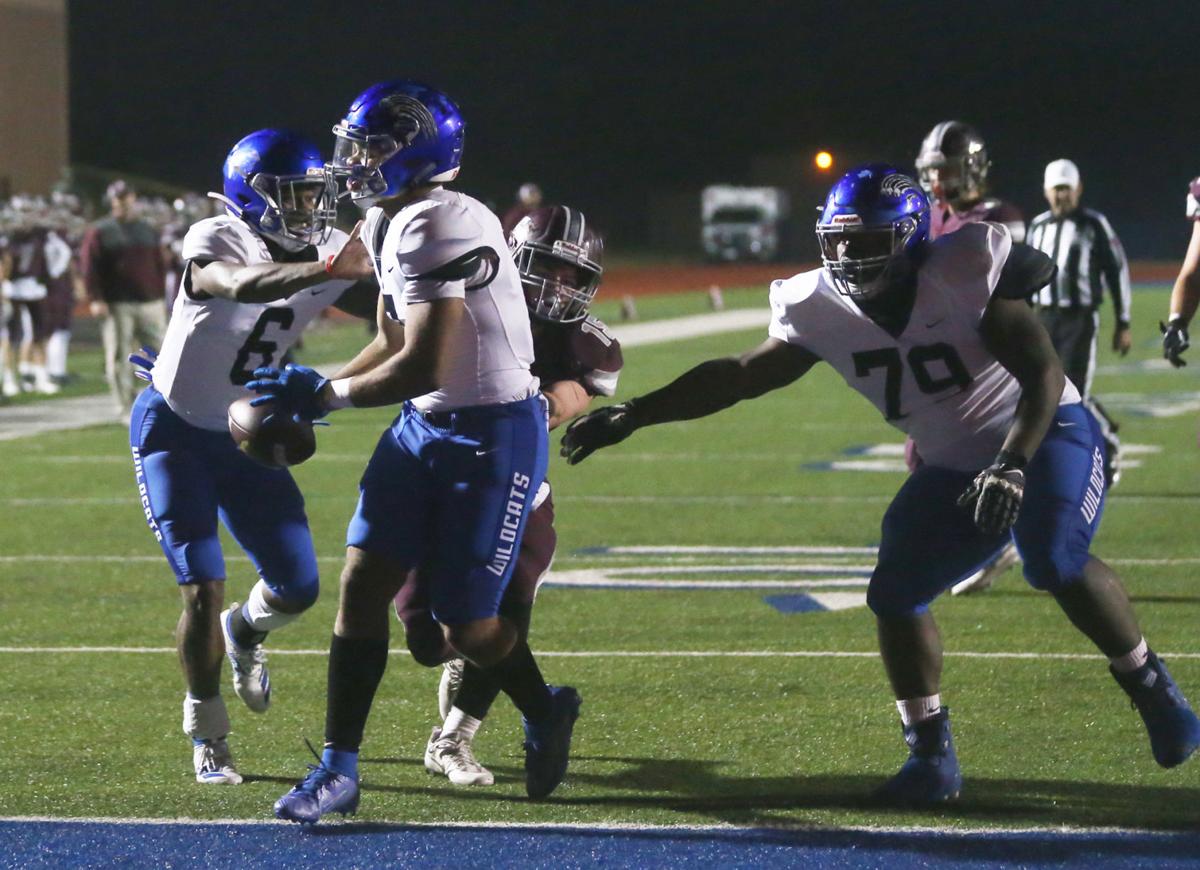 Whitney running back Dez Garner scores past Troy’s Mason Cooke in the first half.

Troy’s Beau Workman, right, reaches for Whitney’s Kolby Tanner, left, after an interception in the first half.