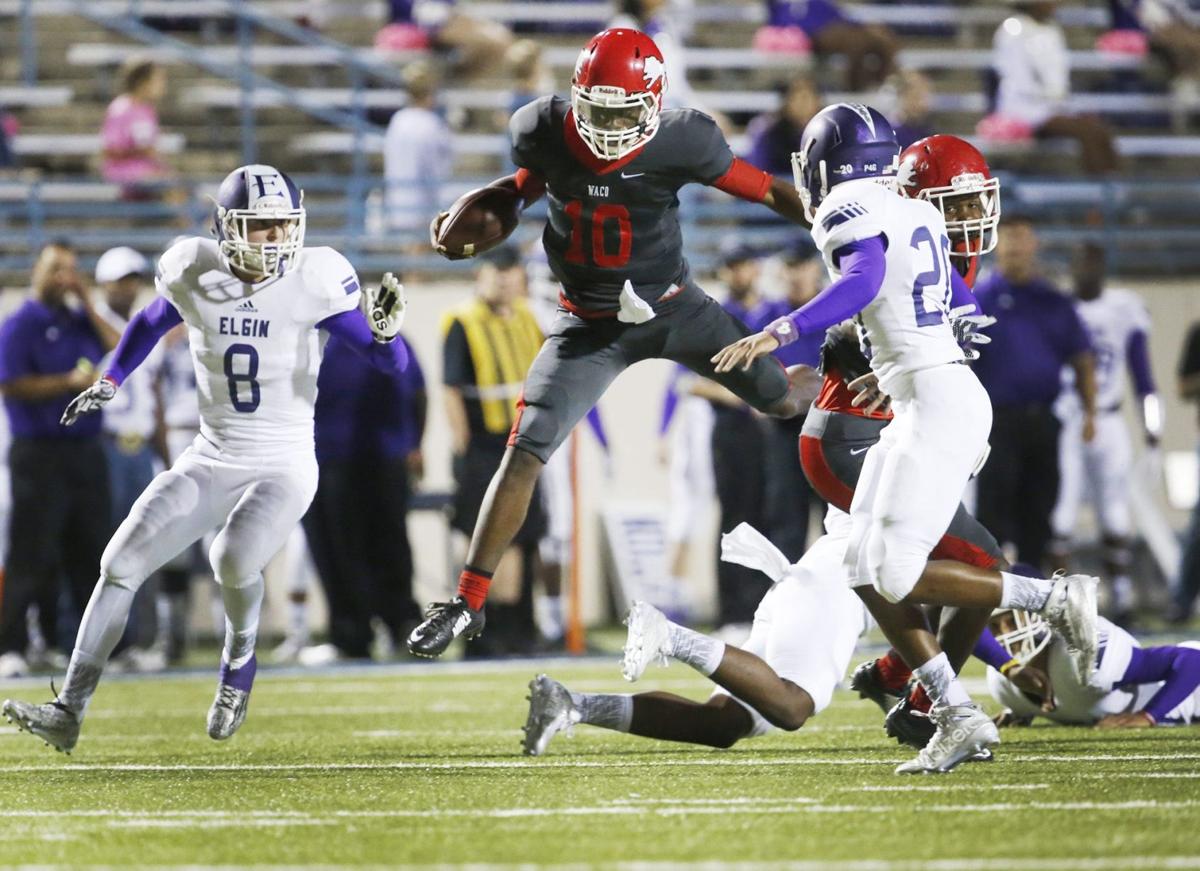 Waco High quarterback Will Richards III (center) leaps over Elgin defenders during the Lions’ victory Thursday night. After collecting 101 yards on 11 carries, he left the game with a sprained ankle. 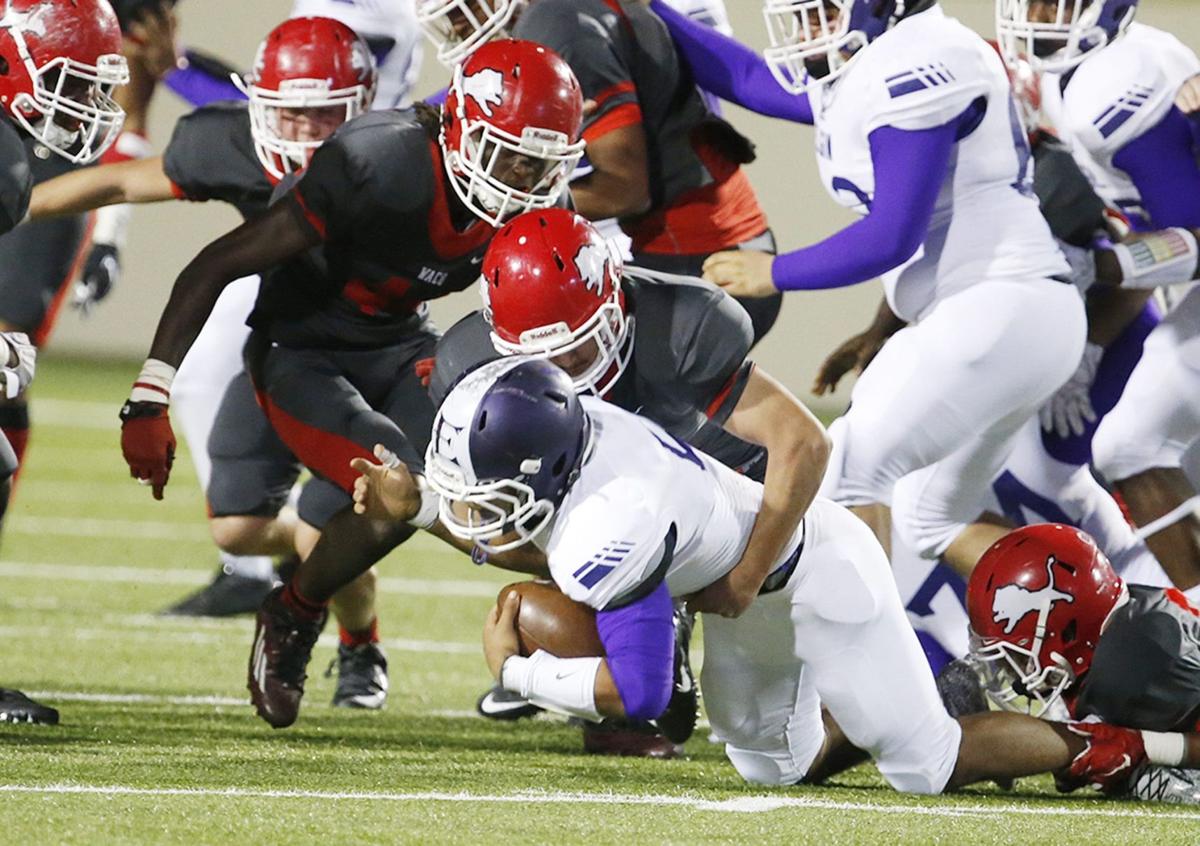 Waco’s Danny Guiterrez pulls down Elgin’s Jacob Cook in the first half of Thursday night’s game at Waco ISD Stadium.

The Lions have traditionally been known as a power-running team, and they dominated Elgin to the tune of 438 rushing yards in a 51-33 victory at Waco ISD Stadium.

Jalen Harris picked up the bulk of that during a 229-yard performance that included five trips to the end zone while playing in the slot, at running back and subbing in and out at quarterback after Will Richards III suffered an ankle sprain.

“We had to go to Jalen off and on the whole game, and Jalen’s a playmaker,” head coach Marty Herbst said. “That’s about all you can call him. It doesn’t matter if you line him up at quarterback, slot, running back. Wherever you put him, he’s going to make plays and you saw that tonight.”

Herbst said Richards, who added 101 yards on 11 carries and threw for 31 yards and an interception, will likely be ready to go next week, when the Lions close their regular season against crosstown rival University at 7:30 p.m. Friday at Waco ISD Stadium.

While the Lions (5-4, 3-2 District 17-5A) maintained a comfortable margin throughout the night, it was far from a perfect performance.

They were hit for 11 penalties, including one stretch in which they had three false starts that took them from first-and-10 to second-and-25, and they blew several assignments defensively that kept them from turning the game into a rout.

“It’s an ugly win, and we knew coming in that if we got a win, we’d be a playoff team,” Herbst said. “We got that, but as a coach I have to scratch my head quite a bit. Even though we put up 51 points offensively, we didn’t play well. We made a lot of mistakes. We had too many holding calls, too many false starts.

“We had too many bad routes, and then to give up 33 points is something we’re not used to playing a team of this caliber. A little bit of that was due to injuries, but I think a lot of it was the mentality of a high school kid. ‘Hey, we’ve got this thing won, let’s just get out of here.’”

Still, the outcome was never in doubt.

Waco High scored on its first two possessions on an 18-yard Harris run and a 2-yarder from De’Andra Jackson for a 14-0 lead with 6:12 left in the first quarter.

Elgin stopped the Lions’ third try with an interception from Stephon Smith, who returned it 42 yards to the Waco High 14. That set up Jacob Cook for a 1-yard TD plunge that drew the Wildcats back within a touchdown at 14-7.

But the Lions answered with Jackson’s second scoring run of the night, a 1-yarder early in the second quarter that restored a two-score margin, and Harris found the end zone on runs of 5 and 50 before Alexis Arranaga drilled a 40-yard field goal at the second-quarter gun to send Waco High into halftime with a 38-17 lead.

Harris put any thoughts of a comeback from the Wildcats (1-8, 1-4) to bed quickly in the third quarter when he blazed 74 yards to paydirt, and he put the Lions over the 50-point threshold later in the quarter with an 8-yard scamper.

Elgin, which was eliminated from playoff contention and will close its season next week against district-leading and fifth-ranked Temple, finished with 330 yards of total offense. That effort that was paced by 116 yards and a touchdown on the ground from Donovan Thomas.

De’Amante Strong completed seven of his 21 attempts for 83 yards. He threw an 8-yard touchdown pass to De’Clayvin Simmons late in the fourth quarter, and was intercepted by Xavier White to stop a promising Wildcat drive in the third. Strong also ran for 61 yards and a touchdown.

The rash of injuries that has plagued Waco High for the last two seasons has found its way back into the mix, but the good news for the Lions is they’re only playing for seeding next week. They can still finish as high as second should Manor drop its remaining two games, and they would wrap up at least the No. 3 spot with a win in their finale.

But if they’re not able to get healthy, they have plenty of experience adjusting on the fly.

“Defensively the thing you have to do is back up and make things a little simpler,” Herbst said. “Usually that’s a pretty good adjustment. Sometimes when you try to put too much on them, that’s when the mental mistakes happen, and that’s when they get first downs and put a lot of points on the board.”

It’s a well-known fact of high school sports that it’s never been easier to get into the playoffs.

Sometimes a few minutes is all it takes.

In Milford, Ta’Ron Smith passed for five touchdowns, including one with 27 seconds left to ice the Bulldogs’ win over the Panthers in what cou…

In Cedar Hill, Trinity Christian quarterback Marvin White scored three touchdowns to propel the Tigers to a key district win over the visiting…

In Axtell, Mart blew open a tight game with three third-quarter touchdowns in a District 8-2A clash.

In Cameron, the fourth-ranked Yoemen slogged past Florence in a game that featured a combined 17 fumbles on a rainy night.

In Fairfield, the Eagles found their rhythm with three second-quarter scores and never looked back in a District 7-4A win over their rival Blackcats.

Jett Truss had played sparingly at quarterback for Gatesville, but the sophomore came through in a big way when his number was called Friday night.

China Spring shrugged off soggy conditions by playing crisp and fast to plow ahead in District 13-4A Division I.

On a night that was more suited for ducks and other amphibious creatures, the Lorena Leopards proved to be good mudders as they used strong se…

Even on a fast track with ideal footing, Crawford and Bosqueville figured to play a defensive struggle Friday night.

TEAGUE — Mikkail Shepherd turned in another prolific performance as the Lions remained undefeated in District 11-3A Div. I, clinching at least…

GROESBECK — Josh Ford shifted into high gear to help carry the Goats to their first win of the district season and keep their playoff hopes alive.

WEST — After just missing the playoffs last year, the West Trojans wanted to leave no doubt in 2015.

Waco High quarterback Will Richards III (center) leaps over Elgin defenders during the Lions’ victory Thursday night. After collecting 101 yards on 11 carries, he left the game with a sprained ankle.

Waco’s Danny Guiterrez pulls down Elgin’s Jacob Cook in the first half of Thursday night’s game at Waco ISD Stadium.