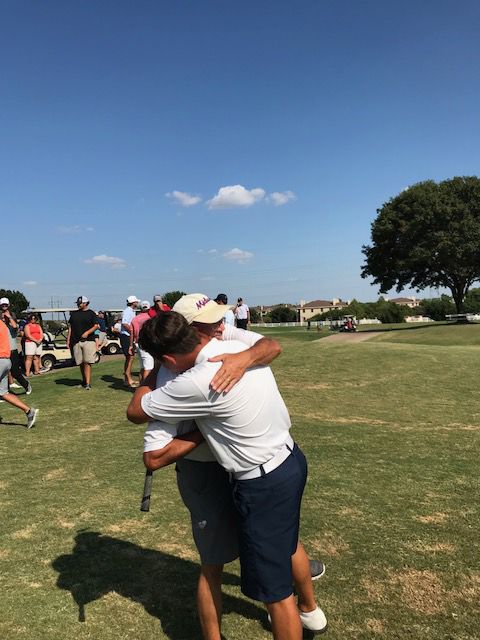 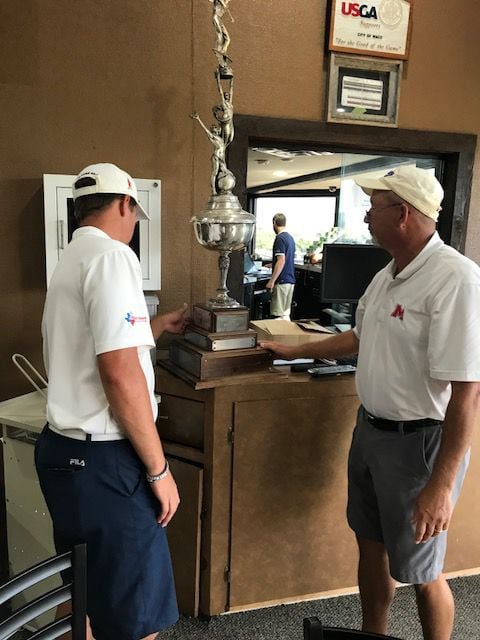 Mason Mikeska (left) and his father Keith check out the championship trophy for the Waco City Golf Championship.

By ART STRICKLIN Special to the Tribune-Herald

Excessive heat at Cottonwood Creek may have slowed down the full field of competitors Sunday, but nothing could slow down the low scores of former Midway golfer and current MCC sophomore Mason Mikeska, who rolled to an impressive win in the 2019 Waco City Golf Championship.

A former summer employee at Cottonwood, Mikeska put together what he called the best rounds of his life, 68-67-135 total, nine-under-par, for a six-shot win.

“It’s just awesome, to win in front of my family and friends at a place I’ve played all of my life is just incredible,” he said after greeting a steady stream of well-wishers following a final hole putt.

“That hug I gave my dad behind that 18th green will probably be my greatest memory of this course.”

“It just wasn’t my day today. I didn’t play well enough, but hats off to Mason who put together two sub-70s scores in conditions like this,” said Blenden.

Both Blenden and Mikeska were tied for the lead going to the final round on another steamy Sunday, after both shooting opening round 68s, and the two were still neck and neck after nine holes with Mikeska ahead by a single shot.

But that’s where the closeness ended. Mikeksa recorded birdies on holes 10 and 11 and 13 and was suddenly ahead by four shots with just five to play.

“I had really struggled this summer not shooting the scores I felt I was capable of, but there was a lot of grind and it really paid off. I really owe a lot of what I am to (MCC coach) Vince Clark. He really helped develop me and always believed in me,” Mikeska added.

Mikeska was also supported by his dad Keith, a golf coach at Midway High School, who greeted his son after the victory.

Blenden said he felt he needed a late hole rally, but hit his tee shot in the water on No. 14 and went way left with his drive on No. 16 and had to take a drop leading to a double bogey.

Bob Ammon won his second straight Waco senior division championship, his third overall, but this was perhaps his most meaningful as he overcame left hip replacement surgery 11 weeks ago to get the win.

“I didn’t know if I was going to get to play this year, because I didn’t start swinging until a couple of weeks ago,” Ammon said. “It was a nice surprise, but I had a good surgeon and a good result.”

One of the most successful basketball programs in Central Texas doesn’t roam the halls together. The players don’t hang out in the parking lot…

Mason Mikeska (left) and his father Keith check out the championship trophy for the Waco City Golf Championship.