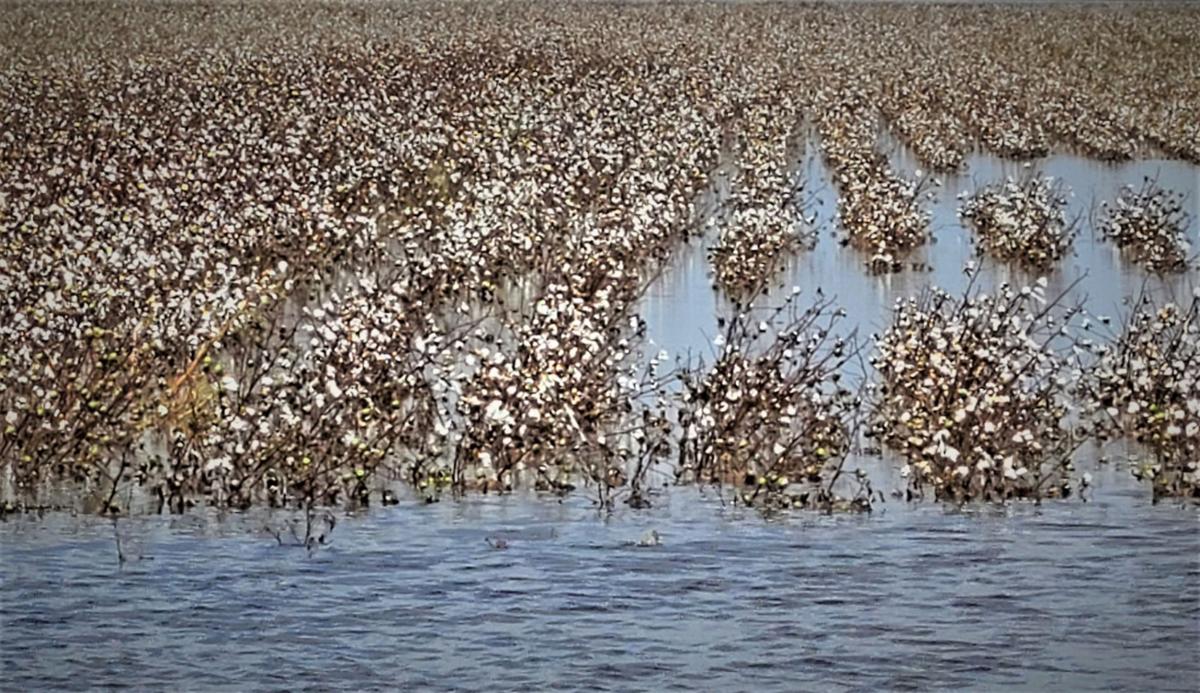 A cotton field flooded by rains from Hurricane Hanna. 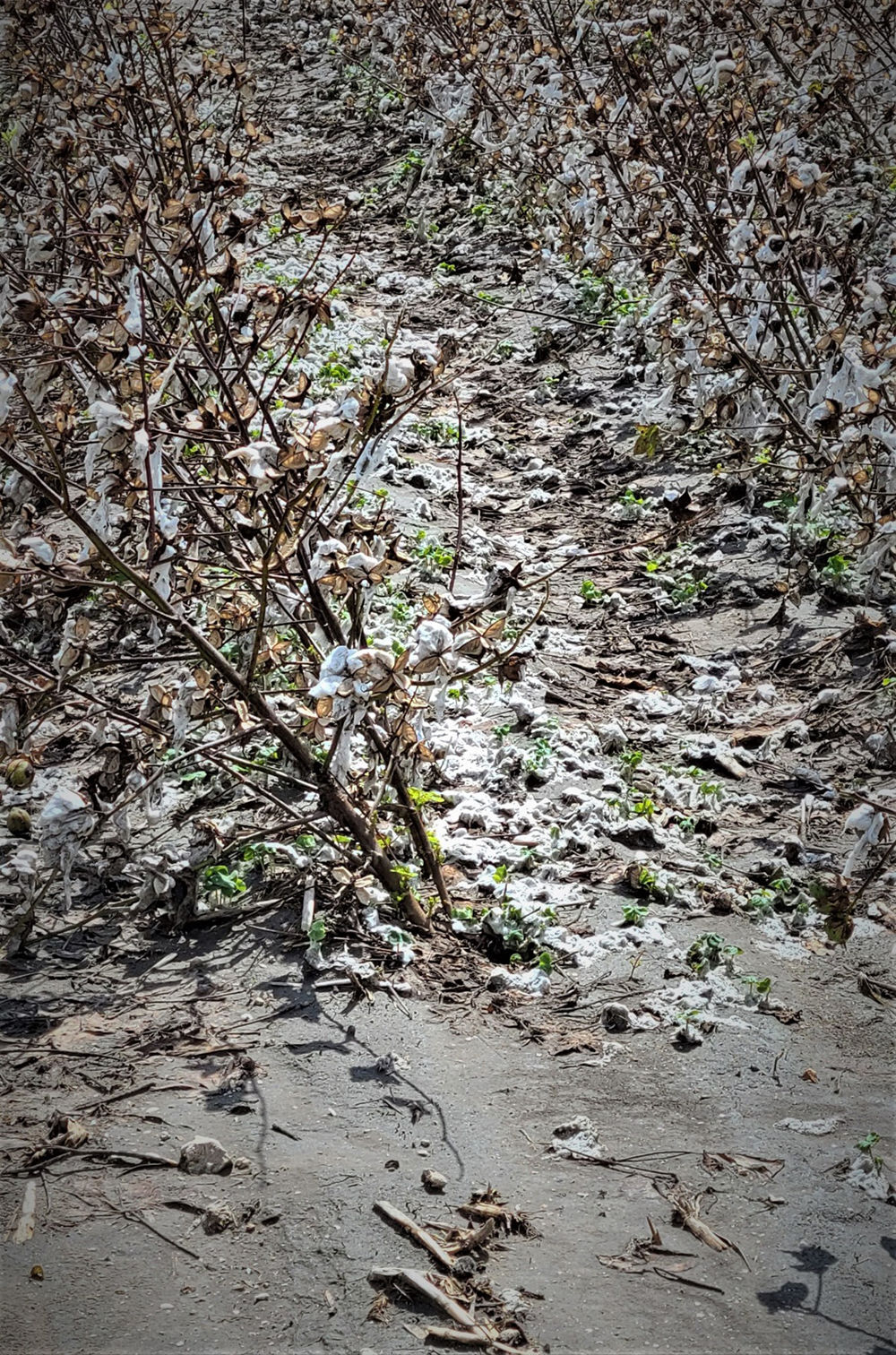 Cotton producers in the Rio Grande Valley took a devastating hit from Hurricane Hanna, according to a Texas A&M AgriLife Extension Service expert.

Other row crops like corn and sorghum were harvested before the storm arrived, but some alternative crops like sesame and citrus experienced damages as well.

Holly Davis, Ph.D., AgriLife Extension entomologist, Weslaco, said Hurricane Hanna took an unexpected last-minute turn to hit the Cameron, Hidalgo and Willacy counties on July 24. All three counties were hit with heavy rains, including 6-18 inches of rain, sustained winds of 30-40 mph and gusts of 60-plus mph.

Davis said the cotton crop looked good prior to the storm, and expectations were for an average to above-average season for most producers, especially if they had irrigation.

Cotton harvest was just beginning with about 2% harvested before the storm hit. Most fields were defoliated, and cotton bolls were open with a lot of lint exposed, she said.

Davis said initial assessments by AgriLife Extension experts and producers estimate 90-100% cotton crop losses for around 138,000 acres. Some acres remain underwater due to heavy rains this past weekend.

There were also concerns about cotton seed sprout due to the moisture levels, she said.

“What wasn’t flooded, splashing reduced quality to unmarketable levels in mature fields,” she said. “There were some later maturing fields, but those are wait and see. The ground is saturated, and water has nowhere to go, so there is still a lot of standing water in places.”

The storm also hit sesame acres hard, Davis said. Like cotton, sesame fields were mostly ready for harvest. There were reports of sesame blown over with seeds on the ground due to high winds, while other fields were expected to rot before fields dry.

“Later-planted sesame was starting to dry down, and was exposed to wind damage, and younger fields look bad right now, but will hopefully pull through,” she said.

Sugarcane was blown over, and citrus orchards, mostly grapefruit and some oranges, took significant damages as well. There were no reports of tree losses, but developing fruit dropped due to high winds, and standing water may affect some producers in the long-term.

“There are still concerns about various crops,” Davis said. “It’s still early, so we don’t have a complete picture of what we’re dealing with.”

“Even though this storm was just a Category 1, the damages were widespread, even more so than some previous storms like Hurricane Dolly,” she said. “The wind and rain were bad, but the timing couldn’t have been worse for cotton producers.”

Rains were scattered, with some areas not receiving any and others received 1-4 inches of rainfall. Grass and crop conditions varied greatly according to soil moisture levels. Crop harvests were delayed by rains. Burn bans were in effect in some counties. Livestock were in good condition. Farmers and ranchers began preparing pastures for winter forage planting. Hot and very dry conditions accelerated corn and sorghum maturity. Corn grain harvest was about 40% complete, and yields were good, but widespread late-season charcoal rot infestations were reported. Sorghum harvest continued as well. Cotton showed drought stress and reached boll opening stage. Nearly all counties reported very short soil moisture levels, and poor overall rangeland and pasture conditions.

Parts of the district received some rain and cooler temperatures. Cotton fields looked promising. Grasshoppers, worms and cinch bugs were present in crops and increasing in numbers. Hay cuttings were light. Producers were providing supplemental feed for cattle. Lambs were going to market without supplemental feed.

Hurricane Hanna delivered over 5 inches of rain to many places in the reporting area, and multiple days of subsequent rains slowed cropping activities. Most sorghum was harvested, and corn was being harvested where producers could access fields. Rains put a halt to the rice harvest. Cotton bolls were opening, and some fields had been defoliated. There was some concern about seed sprouting in open cotton bolls. Cotton harvest will begin when fields dry enough to get machinery moving. Many hay fields and pastures were fertilized before the rain, so they were recovering nicely. Additional grazing and hay will help livestock producers. Cattle auction sales were low due to wet conditions. A few areas were still reporting decreased water availability for livestock, but animals continued to be in good condition overall.

Rainfall amounts were 1-6 inches across the district. Some areas received only scattered showers. Producers continued to cut and bale hay. Marion County reported some producers were planting fall gardens. Pasture and rangeland conditions were good. Subsoil and topsoil conditions were adequate. In cattle markets, feeder calf prices held steady, while slaughter cattle prices were up. Livestock were in fair to good condition. Armyworm and Bermuda grass stem maggots were reported. Wild pigs were active and caused damage to pastures and hay meadows.

The district received scattered showers with totals ranging from trace amounts up to 2 inches in a few areas. Cotton was still blooming. Most irrigated cotton was in good condition, and most dryland cotton was in poor condition. Ranchers were providing supplemental feed to livestock due to the lack of grazing available.

Rains of 0.5-2 inches improved soil moisture conditions. A greater percentage of counties reported adequate topsoil moisture with a few reporting short topsoil moisture levels. The rain perked up pastures and forage crops. Temperatures across the district stayed in the 80s during the day. Corn was doing well. Soybeans were starting to struggle due to the lack of rainfall and heat during previous weeks. Cotton and sunflowers were doing okay.

Temperatures were in the upper 100s with lows in the mid-70s. Scattered showers delivered trace amounts of rainfall. High winds were drying out grasses. Most crops suffered extreme yield reductions with a majority of grain sorghum expected to not be harvested due to poor growth. Corn was maturing and drying down. Cotton was flowering and setting some bolls. Dryland cotton was mostly plowed under. Irrigation cannot keep up with cotton crop water demands, and plants were beginning to shed bolls heavily. Peanuts in the far northern part of the district began pegging. Watermelon harvest was nearing the end. Pecan producers and hobby farmers were still watering trees and hoping for a good season, but lighter yields were expected due to the early freeze last year and dry conditions this year. Plants and grasses were stressed throughout the day and expected to become worse with higher temperatures in the forecast. The risk for wildfires was expected to increase as well. Pastures have no grass, and remaining cattle were being supplemented heavily.

Rains were light and scattered. Grimes County reported good rainfall. Pastures were holding, but moisture was needed. Hay producers were cutting as grasses mature. Vegetable gardens were still producing but required regular watering due to the heat and drought. Rice harvest should be in full swing soon, and producers were hoping to avoid rain. Livestock were in good condition. Rangeland and pasture ratings were excellent to very poor with good ratings being the most common. Soil moisture levels ranged from adequate to surplus with adequate being the most common.

Spotty showers delivered rain across the district with up to 3.5 inches reported in Kendall County. Moisture conditions were still dry throughout the area due to high temperatures. Pasture and row crops were showing signs of drought stress. Corn and sorghum harvests were wrapping up. Hay harvest continued. Livestock and wildlife were in good to fair condition, and supplemental feeding continued. Does were thinning up as fawns continued to nurse, and antler growth in bucks was coming on.

Northern parts of the district reported hot weather conditions with short to adequate soil moisture levels. The western part of the district also reported hot weather conditions with some rain and adequate to very short soil moisture. Conditions were hot and dry in eastern parts of the district with short to very short soil moisture. Hot weather and surplus to adequate soil moisture levels were reported in southern parts of the district. Several counties reported 2-9 inches of rainfall from Hurricane Hanna. Zapata County reported 5-8 inches of rainfall throughout the county with no major damage from winds or flooding reported. Wind gusts up to 50 mph were reported in Jim Wells County. Starr County reported winds up to 70 mph. Most counties reported little to no damage from lines of storms associated with the hurricane. Hay was baled and sold quickly. Corn harvest was completed with reports of average yields. Most grain crops were harvested and avoided damage from storms. Cotton bolls were opening. Early planted peanuts were starting to set pods. Pasture and rangeland conditions remained fair. McMullen County reported hurricane-induced rains with parts of the county receiving surplus amounts and other parts receiving next to nothing. Rangeland conditions were expected to improve in coming weeks in areas that received moisture. Additional hay cuttings were expected in areas that received significant rains. Watermelon and cantaloupe crops and Bermuda grass hay pastures were in full production. Some citrus trees lost the majority of their fruit due to wind damage. There was extensive structural damage from winds and flooding to farm building and homes in southern parts of the district. Many homes were without electricity for several days.

A cotton field flooded by rains from Hurricane Hanna.