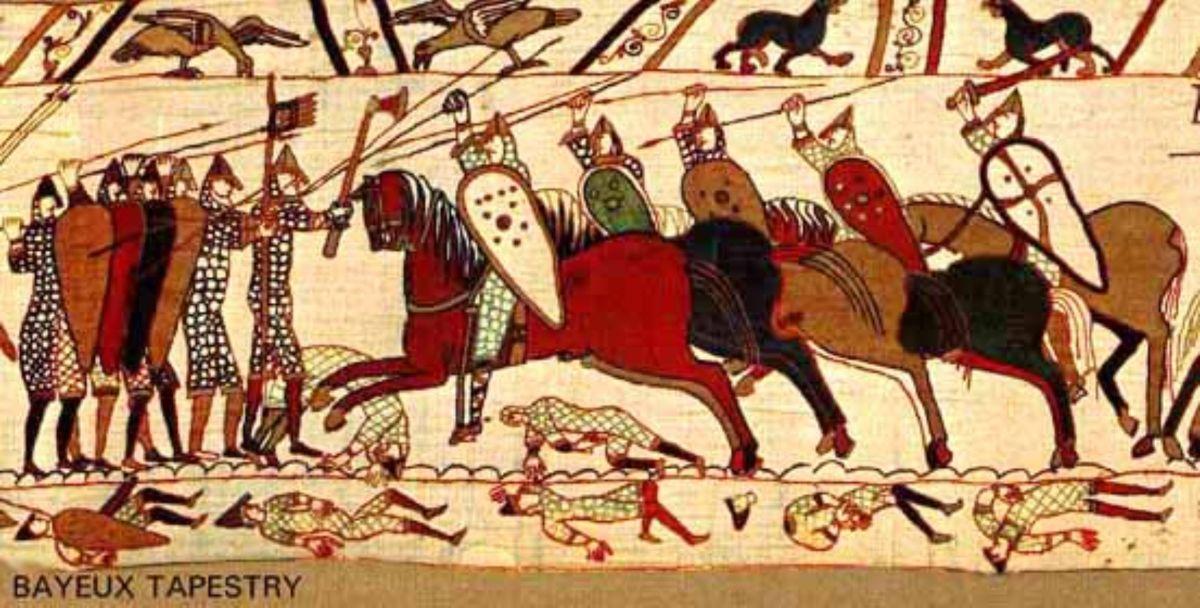 The Bayeaux Tapestry includes depictions of battle scenes from England's invasion of Normandy in 1066. 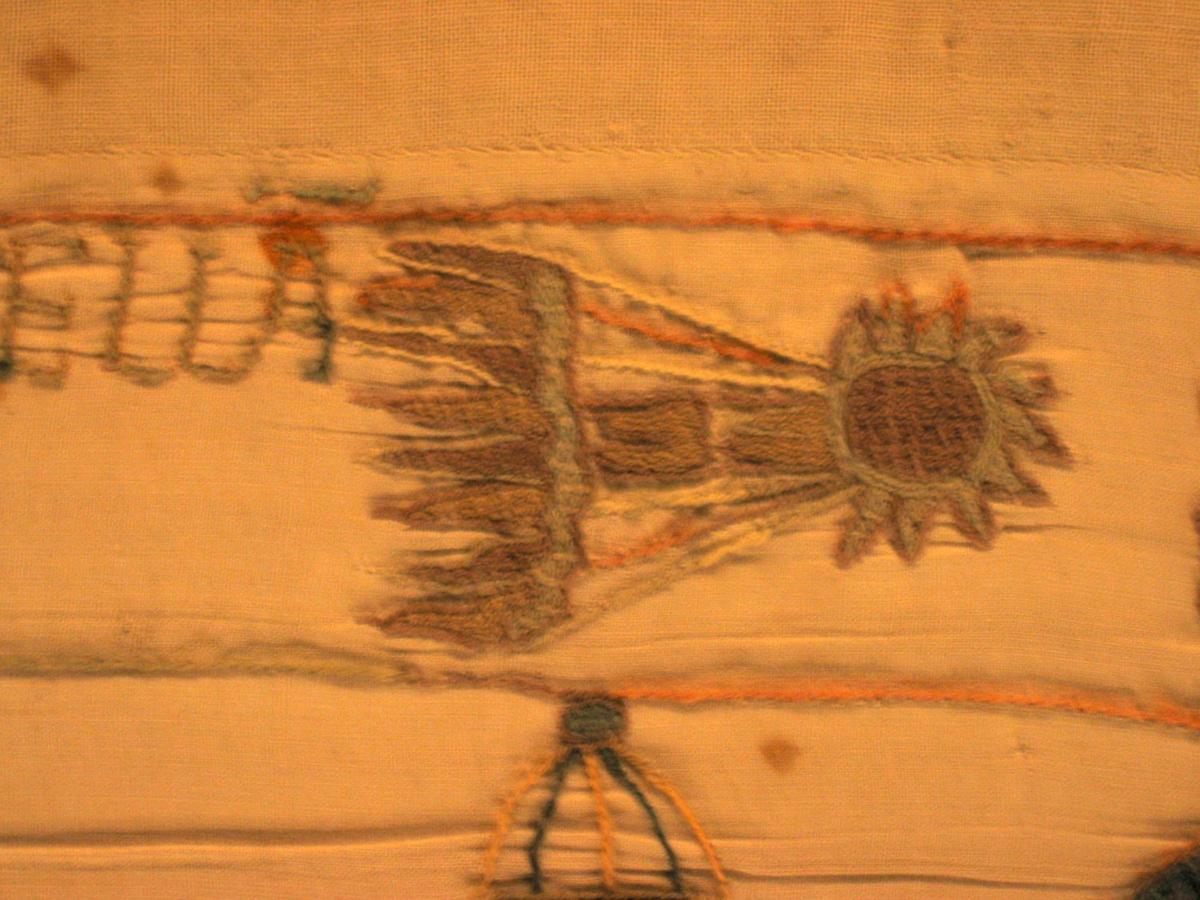 The appearance of Halley's Comet (though it didn't have that name at the time) was captured on the Bayeaux Tapestry. 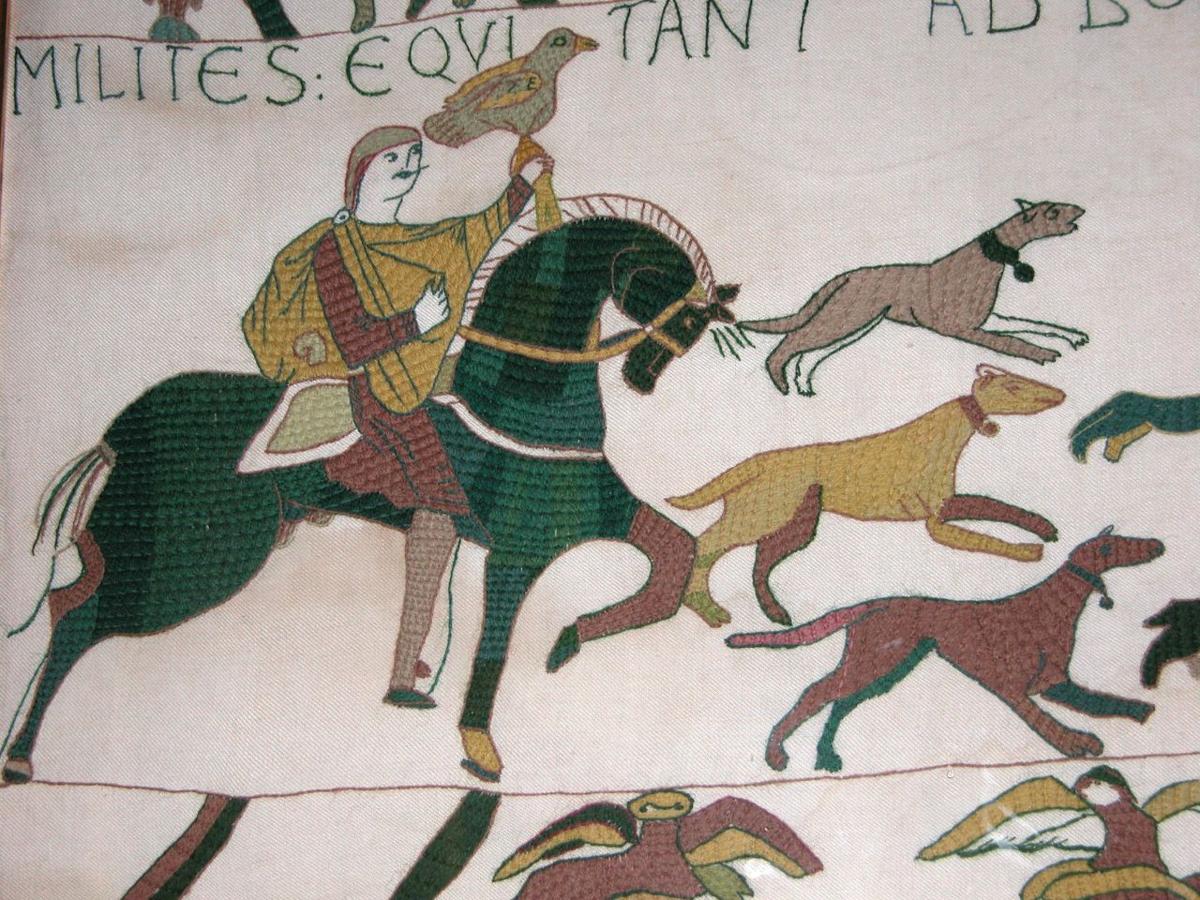 The Bayeux Tapestry uses vibrant colors to tell the story of the Norman invasion of England in 1066.

Leaders of the Allied forces during World War II are shown in one of the many scenes of the Overlord Embroidery.

A fleet of ships, accompanied by bombers in the air, streams out to sea in this scene from the embroidery showcased at the Portsmouth Museum. 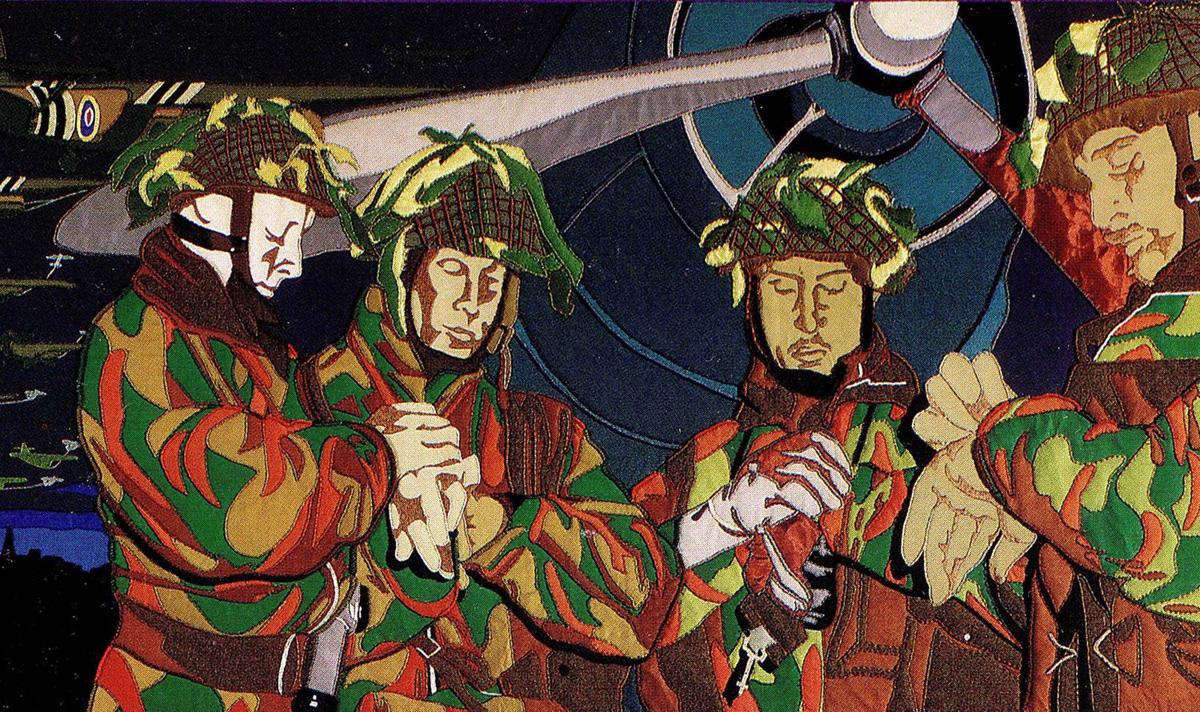 World War II photos were used as references for the Overlord Embroidery, which depicts the Allied invasion of France.

Fifteen years ago, my husband and I ventured into the north of France, driving from Paris to the far Normandy coast. We visited the town of Bayeux where the Bayeux Tapestry is exhibited. Several years later, we traveled to Portsmouth, England where we viewed the Overlord Embroidery.

Created almost a thousand years apart, both depict invasions across the English Channel.

Exhibited so visitors can walk the 231-foot length of the display, this remarkably preserved needlework piece relates William the Conqueror’s invasion of England almost a thousand years ago. The needlework piece had been ordered by William’s half-brother, the Bishop Odo of Bayeux. Tradition holds that it was created by William’s Queen Mathilda and her court ladies, although experts believe the workmanship to be unmistakably English. Actually, “tapestry” is a misnomer since the piece is embroidered rather than woven.

This panorama of pictures, with places and names in Latin, was embroidered on 20-inch linen. Historians acknowledge that it’s our most valuable surviving source of information about the Norman invasion, which occurred in 1066. In colorful detail, the costumes and haircuts of civilians and soldiers, the weapons, chain mail, armor, fortifications, ships, horses and architecture of the period are depicted as well as the culminating battle of Hastings when England’s King Harold was defeated.

Shortly after the Bayeux Tapestry was created, it disappeared until 1476. Records show that it was kept folded or rolled up at the Bayeux Cathedral. Once a year, it was hung around the cathedral walls to celebrate the Feast of Relics of Saint John.

The Bayeux Tapestry survived in this manner for seven more centuries when it was discovered during the French Revolution at the end of the 18th century. During those turbulent days, revolutionists were determined to ferret out and destroy evidence of France’s royal past as well as references to the Roman Catholic Church.

The tapestry was scheduled to be cut up and made into wagon covers when a town official hid it. In 1803, it was exhibited in Paris and studied by Napoleon, who was then planning to invade England. Researchers believe that several feet of the frayed end of the tapestry were lost to decay and carelessness. It is surmised that the final scene would have shown the coronation of William as king of England.

It’s amazing what clever fingers can do with a simple needle and thread. I was struck by the freshness of design and color in the Bayeux Tapestry. Working in eight colors of woolen thread tinted with natural dyes, the creators of the Bayeux Tapestry told the story of this invasion in a storybook fashion.

Duke William of Normandy not only conquered England, he went on to impose a reign that swiftly transformed England into a centralized nation that would ultimately become a world power.

Replicas of the Bayeux Tapestry can be found all over the world.

In 1885, a facsimile was installed at the Museum of Reading in Berkshire, England.

In 1998, another was installed at the University of Waterloo in Ontario, Canada.

In 2000, an accurate replica was begun and is still in progress in Denmark.

In 1997, a hand-painted copy was installed in the University of West Georgia at Carrollton, Georgia.

A half-scale mosaic version begun in 1979 can be seen by visitors to Geraldine, New Zealand.

The D-Day Museum in Portsmouth, England, houses the 272-foot Overlord Embroidery. It was commissioned and funded by Lord Dulverton to record the World War II invasion of Normandy, France, — code-named Operation Overlord — by Allied forces. Even William the Conqueror would have been impressed with the massive armada sent from England in June 1944.

This powerful work of art consists of thousands of shapes of colored cloth applied with embroidery, including sateen, crepe, rep, corduroy, serge, silk, velvet and burlap and 350 yards of cord for edging. Fifty kinds of cloth and textures were used to reproduce waves, great ships, wings of planes, landing craft, beaches, faces of men blackened for night fighting, and combat clothes. Consultation with military experts ensured that details such as combat ribbons and military insignia were accurate.

Lord Dulverton had military experts study and approve each penciled panel before stitching by 25 seamstresses of the Royal School of Needlework, an organization begun during Queen Victoria’s time.

Lord Dulverton died just after presenting the completed Overlord Embroidery to the nation. Because of its great length and a lack of a building to exhibit it, the Portsmouth Museum was constructed for it. For travelers planning a trip to both England and France, I recommend a dual visit to these two historic needleworks, each created to document a great invasion, but almost one thousand years apart in time.

The 34 painted preparatory panels, each 8 feet wide by 3 feet high, were donated to our country and are now on permanent display at The Pentagon in Washington, D.C.

Historian Claire Masters has a passion for writing the stories of Waco’s past. She is also a supporter of many Waco organizations that seek to improve our fair city.

With its large swath of dark green turf, wooden lounge chairs and orange picnic tables beneath a covered pavilion, it looks a bit like an oasis.

It’s a place they can enjoy with their dogs, surrounded by vintage charm.

Things to know when updating your home’s siding

The good news is that you don’t need to sacrifice curb appeal in the pursuit of high-quality siding.

Personalize your space with custom-designed wallpaper

In case you missed it, wallpaper has made a comeback in the interior design world.

Mind Matters: Do one thing at a time

Many people feel like time is wasted and opportunities are missed when they don’t juggle multiple tasks at once.

Alison Sorley says she is living proof that the money raised for research is why she is alive today and thriving.

The Bayeaux Tapestry includes depictions of battle scenes from England's invasion of Normandy in 1066.

The appearance of Halley's Comet (though it didn't have that name at the time) was captured on the Bayeaux Tapestry.

The Bayeux Tapestry uses vibrant colors to tell the story of the Norman invasion of England in 1066.

Leaders of the Allied forces during World War II are shown in one of the many scenes of the Overlord Embroidery.

A fleet of ships, accompanied by bombers in the air, streams out to sea in this scene from the embroidery showcased at the Portsmouth Museum.

World War II photos were used as references for the Overlord Embroidery, which depicts the Allied invasion of France.