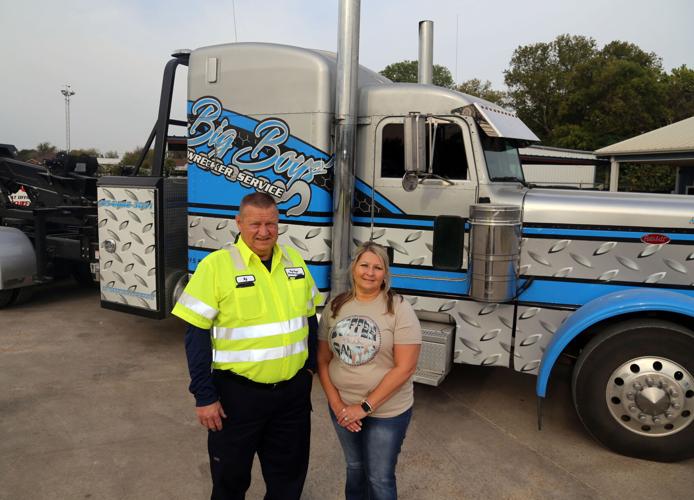 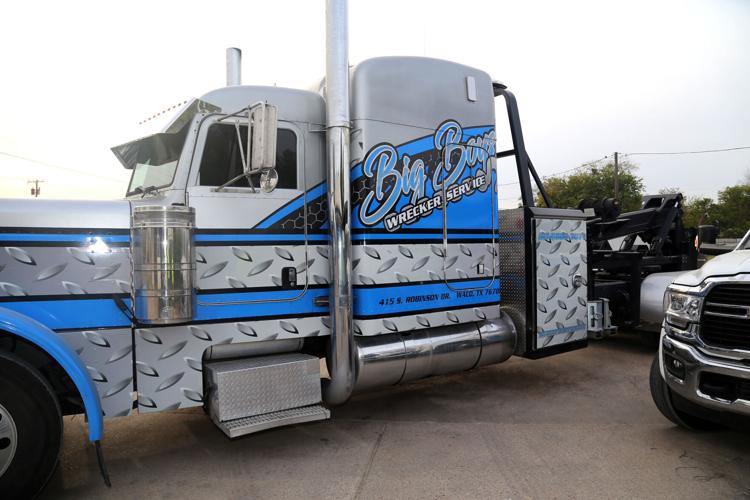 “Nothing is too big or too small; we do it all,” is the mantra for Big Boys’ Wrecker Service, which transports everything from oversize loads down to go-karts and bicycles.

Founded by former McLennan County Sheriff Billy Simons Sr. in September 1984, Big Boys’ Wrecker Service is the oldest family-owned towing business in the Waco area. Billy Jr. took over from his mother Ginger in May 2021, 10 years after his father had passed away.

“We try to do things right,” says Alicia Holder, vice president. “We don’t price gouge because your return business puts out the word, and that’s what we want. We tell our drivers to think every call is your family member and to think ‘how would you want them treated?’”

Big Boys has collected vehicles are far as 450 miles away to bring them to its 2.6-acre headquarters in Robinson along U.S. Highway 77.

Another key to customer satisfaction is conscientious tow-truck drivers, and Big Boys helps ensure that by watching truck cameras to see if their employees are hitting the brakes too hard, talking on phones or not paying attention.

That all adds up to BB’s unsurpassed service beyond simply taking a call and dropping the vehicle at a repair shop or letting the customers relax on their couches while paperwork is completed (which they do).

Holder remembers one driver being rear-ended south of Waco on the way to college and taking him to Hertz for a rental as well as replacing a woman’s alternator for free after she had just lost her husband.

“We also take them to hotels while their big rigs are being worked on because they can’t sleep in them when they’re in the shop,” she adds. “We once dropped a customer at Flying J for a spouse’s convenience because we’ve been on both sides of having car trouble and know how important courtesy is to clients. That goes a long ways.”

Having 24-hour service in times of crisis and the right rigs for the job also go a long way with four light-duty trucks, two rollbacks and four big wreckers on standby for big trucks, 18-wheelers and large trailers.

Besides basic transporting, other services include loading and unloading virtually any equipment to jump-starting or fueling vehicles, changing tires and unlocking cars and trucks, especially when children or pets are inside.

“One Robinson lady left her pets in her car at the groomer’s with the engine running, and her dog locked itself in,” Holder remembers with a laugh. “Other times, we have helped a parent at convenience stores with their kids buckled in car seats. Fortunately, most of them are cool, just wondering why mom and dad can’t get into the car while the parents are sometimes panicking. They call 9-1-1, who refers them to us.”

Incidents like this show the 24/7 side of the job and often long hours for everyone.

“I usually come in between 7 or 8 a.m. and work till 6, but sometimes until 2 a.m.,” Simons says. “You never can tell from this business because you never know when the phone’s going to ring with a wreck or getting a vehicle out of impound. DWIs are out of control and have become worse since COVID-19.”

The pandemic severely tested the business’s survival, according to Holder.

“The first six weeks were scary with virtually no traffic and no traveling, so we prayed a lot,” she says. “We were still able to pay drivers and keep the doors open. Eventually, it started picking up, and we ended up only losing one employee.”

Few know the challenge of running and maintaining a company.

“Owning your own business isn’t the joy many think it is because the phones don’t stop ringing at 5; it’s 24/7.” Holder says. It’s been a challenge to find people willing to work as drivers, while the cost of gas and insurance for the trucks is expensive, she says.

Another important Big Boys’ service is vehicle storage up to 46 days (cars, pickups and vans cost $21.03 daily; trailers and trucks over 25 feet long are $36.80 a day). After the deadline, the vehicles become the property of BB and go to auction. A record 89 vehicles went to auction in March, she said.

One notorious vehicle stored a few weeks in the mid-1980s was a car used by convicted murderer Kenneth Allen McDuff. It contained plenty of evidence inside for investigators.

Big Boys also supports China Spring’s and Robinson’s 4-H clubs and football teams, along with Connally, La Vega, University and Bruceville-Eddy as well as the McLennan County Junior Livestock Show and other organizations.

The business also helps local fire departments and McLennan Community College by bringing scrapped vehicles from M. Lipsitz and Company to them for training exercises.

“If it weren’t for the communities around us, we wouldn’t have a business anyway, so we’re happy to help people out,” Simons says. “Anytime there’s a function, we try to do all we can.”  

Person of the Year: Jeremy Everett

In John 21:15-17, Jesus tells his disciple Peter “Feed my sheep.” He’s telling Peter to care for God’s people, if not actually physically nour…

When owners Josh and Jennifer Sims penned their mission statement for Oak & Ivy Wine Bar and Bistro, their “why” for opening the restauran…

Those Who Make a Difference: Eric Hawkins

Eric Hawkins says being part of the Waco Police Department’s Neighborhood Engagement Team aligns perfectly with his belief that law enforcement needs to meet people where they are in life.

I love looking at holiday lights. In fact, our family still drives around during the Christmas season to look at the many gorgeous light displ…