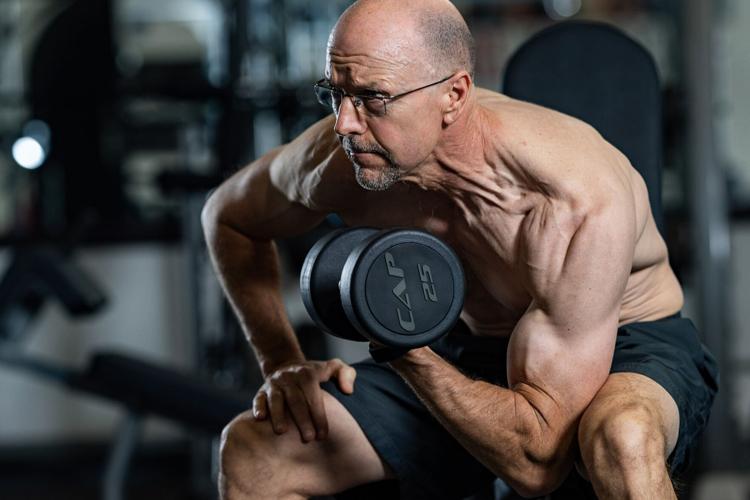 Brian Bays exercises his arms by doing curls. The 56-year-old fitness enthusiast works out about two hours every day except Sunday to keep himself in top shape. 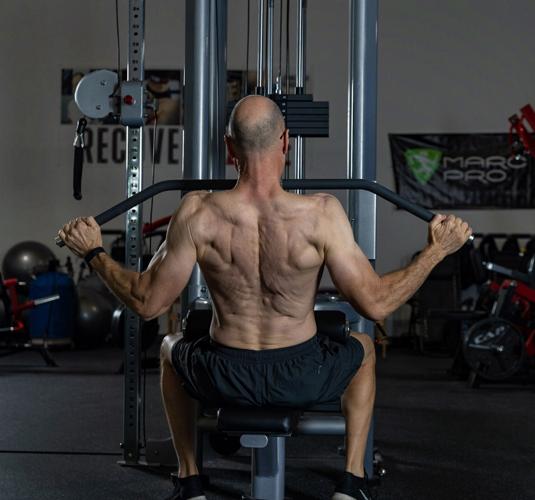 How the muscles look when they are under a weight load has fascinated Brian Bays. He concentrates on different muscle groups in his daily workouts. 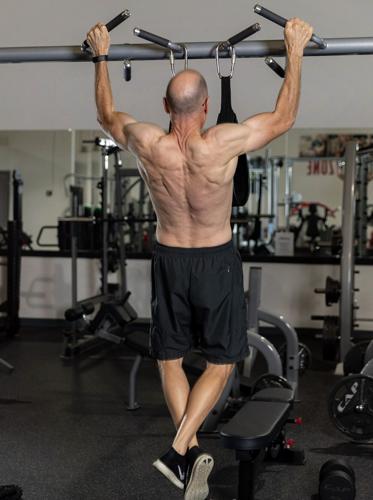 Doing pull-ups, usually with weights added, is one of Brian Bays’ favorite exercises to do. With his diet and exercise, he has maintained a weight around 160 pounds since high school.

Some people grudgingly make the effort to exercise. Others are like Brian Bays, who starts his day early with a workout and uses it as a springboard to having a good day.

“I do it to be as healthy as I can be, and I like how it feels,” Bays said. “I go early in the morning and when I leave there I’ve had an accomplishment for that day and I feel positive about my day. It’s a good start.

“It puts me in a good mood, a good frame of mind for the day. No matter how my day goes, I always feel good about starting in the gym. I feel strong. I feel healthy. Mentally, I feel good.”

The 56-year-old began working out in his 20s when a friend who was into fitness encouraged Bays to work out together.

Since he began, his workouts have remained fairly consistent through the years, he said, noting there were periods in his life when his routine did change such as after he got married and when he had children.

On those exercise days, he’s at it early, getting into Crunch Fitness, which is a 24-hour facility, around 4:30 a.m. and spending about two hours going through his workout routine. He’s out the door by 7 a.m. before he begins the work day as a special education teacher in the Connally school district.

As fitness experts suggest, he cycles through exercises that target different areas of the body each day. One day it’ll be his legs and core, then the next day maybe the back and trapezius, then chest and shoulders, and arms and core.

For example, on the day he’s concentrating on his back muscles and trapezius, he’ll spend about a half-hour on each of those and then 30 minutes on a cardio workout.

“I’m pretty hard-core,” he admitted. “But I like it. I really enjoy doing that.”

Cardio workouts are usually on the treadmill, elliptical machine or stationary bicycle.

Bays was a regular at Gym-X until it closed. He moved to Crunch Fitness shortly after it opened in January 2019 and enjoys it for its low monthly cost and nice equipment.

When COVID-19 forced the closure of gyms for a couple of months starting in March, Bays had to settle for the gym in his garage.

He definitely felt limited in his workouts.

“I have some dumbbells in there,” he said. “So it was mainly a lot of pushups, doing curls with the dumbbells. I also did body-weight lunges and squats. It’s some serious cardio.”

He also was able to do HIIT (high-intensity interval training) cardio in his home.

But he’s happy to have been able to return to Crunch Fitness.

Among his favorite workouts is deadlifting.

“I know that’s an ego thing, but I feel strong when I do that,” he said.

Bays recently deadlifted 385 pounds, but his goal is to lift 405 pounds by his birthday in February.

Another exercise he enjoys is doing weighted pull-ups.

He does a dropset routine for that, starting out with pull-ups of an additional 45 pounds, then 25 extra pounds, and finally pullups of just his body weight.

“The dropsets help tax the muscle and the fatigue of going under a load,” he explained.

How the body reacts to exercise has fascinated him for some time, he said.

“It amazes me how the body looks when it’s under a load (of weight),” he said. “It’s like, wow. How it’s all tied together and how it works. It’s more than just seeing the muscle tone. It’s how the body develops and grows through work and through repetition.

“If you’re intense and consistent about it, your body will respond.”

When the body goes through the stress of an exercise, it’s impressive to see, he added.

“When you work out you see those muscles get tight and start popping out,” he said. “That’s amazing.”

Although he’s worked out consistently for years, Bays said he still sees development changes in his body.

“I noticed lately there are changes still and I feel more developed now,” he said. “Even now I’ll see where (the muscles are) growing and changing. Even at age 56.”

One thing that has changed little is his weight, he said.

He weighed around 160 pounds during his high school years at Midway and remains around that number.

“Maybe I lost some body fat and gained some muscle mass, but my weight has pretty much been consistent the past 30, 35 years,” he said.

He remembers his father telling him to expect to start putting on some extra weight after reaching 30 years old, then 40 and 50, “but it hasn’t happened yet.

“I think I have some good DNA there, but working out and eating healthy helps as well there.”

Bays subscribes to a mostly vegetarian diet these days, though he eats meat occasionally.

But that’s a relatively recent change. About five years ago, his oldest son was living with him at the time and wanted to go vegan.

“I was like, ‘I don’t want to cook you a meal and cook me a different meal,’ so I got on vegetarian then,” he said.

In addition to meat, he does consume yogurt and eggs every now and then, which vegans don’t do.

Bays said he eats lots of tofu, legumes, nuts, vegetables and now seitan, a meat substitute made out of hydrated wheat gluten. It’s high in protein, low in carbohydrates and has no fat.

He first learned of it about nine months ago.

Bays said he eats plenty, taking in about 3,000 calories a day but of course working that out during his exercises.

“It’s all part of the package,” he said. “It’s what you intake and what you burn.”

Eating junk food is a rarity for him.

“My junk food is Wheat-Thins and dark chocolate almonds,” he said. ““I have a sweet tooth, but I try to keep that under control.”

There remains that enjoyment for him of exercising daily.

“Part of that’s ego, wanting to be strong and look strong,” he said. “Being trim and lean, that’s why I do it.

“I’ve been blessed and healthy. I’ve got some aches and pains, but that’s from getting older. That’s the way it is.”

He encourages others to seek a healthier lifestyle through regular exercise and a good diet.

“I know come January you have people join the gym and they hit it hard for a few weeks and then fade away,” he said. “For results, you’ve got to be consistent about it.

“There’s not an easy fix and no overnight answers. But in the long run, it’s definitely worth it.”  

Brian Bays exercises his arms by doing curls. The 56-year-old fitness enthusiast works out about two hours every day except Sunday to keep himself in top shape.

How the muscles look when they are under a weight load has fascinated Brian Bays. He concentrates on different muscle groups in his daily workouts.

Doing pull-ups, usually with weights added, is one of Brian Bays’ favorite exercises to do. With his diet and exercise, he has maintained a weight around 160 pounds since high school.