Jesse’s Tortilla Factory offers a wonderfully corn-infused aroma that extends beyond its modest structure on the corner of 13th Street and Webster near downtown Waco.

You’ll know you’re in the right spot when you exit your vehicle and get a whiff of Mexican food magic started by the late Jesse Contreras. The white stucco building sports a cactus theme décor and the front door reminds patrons that even the Almighty would approve tasty foods from Jesse’s as evidenced from the Bible verse, “Taste and see that the Lord is good.”

Alice Rodriquez, one of Contreras’ daughters, has worked at the tortilla factory for over three decades and takes pride in serving generations of customers. Now owner, after her mother died last year, Rodriquez oversees the business her dad established 61 years ago.

A soft-spoken, petite woman who has a keen eye for making sure exceptional quality is the norm for Jesse’s, she smiles as she remembers the family food legacy started decades earlier before her father ever made his first chip.

“Dad was discharged from the Army in 1950,” Rodriquez said. “He started delivering tortillas for his future mother-in-law, Herma Linda Nino.” Rodriquez fingered an old, slightly creased black-and-white photo of her grandmother smiling and sitting behind the wheel of a dark, slick sedan.

Hispanic, female business owners were a rarity in the 1950s, but the picture of Nino perched confidently in the sedan unknowingly paved the way for granddaughter Alice to eventually own and manage Jesse’s.

On the top shelf behind the counter, Rodriquez speaks warmly of family photos and mementos representing years in the business. An 8-by-10 black-and white picture of a handsome Contreras sporting his Army uniform sits center on the shelf. Beside it is another picture of him standing next to his early tortilla machine. Rodriquez points to a small replica of a tortilla-making machine once used by her dad.

A picture of Esther, her mother, rests next to a picture of a younger Rodriquez smiling, standing by the tortilla machine. The importance of familia is evident in the tortilla factory.

Nino’s tortilla shop was in downtown Waco, in mainly the Hispanic area, Rodriquez remembers. As newlyweds, Contreras and his bride, Esther, wanted to venture out and create their own business. Determined to make a go of it, Rodriquez said her dad sold tortillas as far as the Fort Hood community. Her dad officially opened Jesse’s Tortilla Factory in the fall of 1958.

By this time, he and Esther had a growing family with growing appetites. The tortilla shop was originally a duplex with the Contreras family living on one side, and the shop on the other.

Rodriquez says back in the day her family had only one tortilla-rolling machine. Waco and surrounding communities saw rapid growth and residents developed a hearty appetite for eating away from home.

Over the years, the Contreras family added the current mammoth-sized tortilla machine that begins churning out the round, thin corn discs every workday at 6 a.m. A large silver grain silo on-site houses corn which is washed, cooked and converted to hominy.

After processing, eventually the soft corn kernels are mashed into maza, or dough. An employee stands at the edge of the tortilla machine making sure dough goes smoothly through the extruder.

A conveyor belt then moves the tortillas through an oven for baking where they then head to the kitchen and are packaged for purchase or cut and fried to become chips or taco shells. About 1,800 pounds of corn per day is used to produce an impressive 600 tortillas every hour during the workday, Alice said.

Two years ago, the restaurant began offering weekday lunch plates from 10:30 a.m. to 2 p.m. For $8.75 plus tax, you can get two tacos or four pork taquitos with each entrée served with rice, beans, chips, salsa and a drink.

Tamale plates come with your choice of three pork or spicy pork tamales, rice, beans, chips, salsa and a drink for $9.95 plus tax. A taco salad (chips and salsa not included) costs $5.95 plus tax.

Although Jesse’s has no dine-in seating available, grab a lunch plate and head to nearby Cameron Park for a change of lunchtime scenery.

Business was brisk on recent sultry, early summer day with a continual stream of customers happily walking away with tasty purchases of crisp tortilla chips, mouth-watering homemade salsa, and for the more energetic cook, bags of homemade masa for making tamales.

For cheese lovers, grab some queso that’s available in one-cup servings all the way up to the gallon-sized container. Taco and chalupa shells are sold by the dozen or by the box of 108.

Impress your guests with Jesse’s large taco salad bowls. Take home and fill with your favorite salad fixings. Packages of corn husks are available for purchase if you want to try your hand at tamale making.

Tamales from Jesse’s are such a hit, they are made in their house on the corner complex. Employees handcraft chicken, beef, regular pork or spicy pork tamales. Tuesday is Tamale Day and Alice estimates 100 dozen tamales are made and sold weekly.

Mind-boggling is the word for the untold amounts of tamales made every December for the holidays. Go ahead and mark your calendar to order tamales early for this year’s winter festivities. Think of it as Christmas in July.

The pandemic has been challenging for restaurants.

Joe Monastero, Texas Restaurant Association chief strategy and operations officer, said in early June in a report on NBC that over the course of the last 15 months, the association estimates about 10,000 food service outlets and restaurants closed across the state.

Alice and Santos are grateful for the loyal support of their many customers. During the pandemic, they were closed to walk-in traffic, but continued supplying restaurants while dine-in restrictions were in place.

Jesse’s employs almost a dozen people and no layoffs occurred during the pandemic.

The chips were never down for this well-loved restaurant.  

The bar and grill’s owners intentionally set to create jobs and generate support for organizations in West.

Westfest is back: Czech festival anxious to return, celebrate 45 years

After a year without Westfest, the city is thrilled to welcome it back as the Czech festival will mark 45 years.

Oh, that we would all be fortunate enough to have our loved one gaze longingly into our eyes and be completely content with head scratches and belly rubs.

Waco is making it easier to return pets to their owners or find them new ones.

Welcome to doggy day care, a booming phenomenon around Waco that in some ways resembles a day camp.

Those Who Make a Difference: Michael Jeter

“We’ve had a lot of students who say they don’t like reading, but once they get the confidence they discover they like reading and it’s a game changer.”

Grape Expectations: So will HR 3287 be able to deliver?

Congress is finally giving the U.S. Postal Service an overhaul toward 21st-century practices regarding shipments of adult beverages.

From Civil War tales to curated collections, you can find a great new book with these local recommendations. 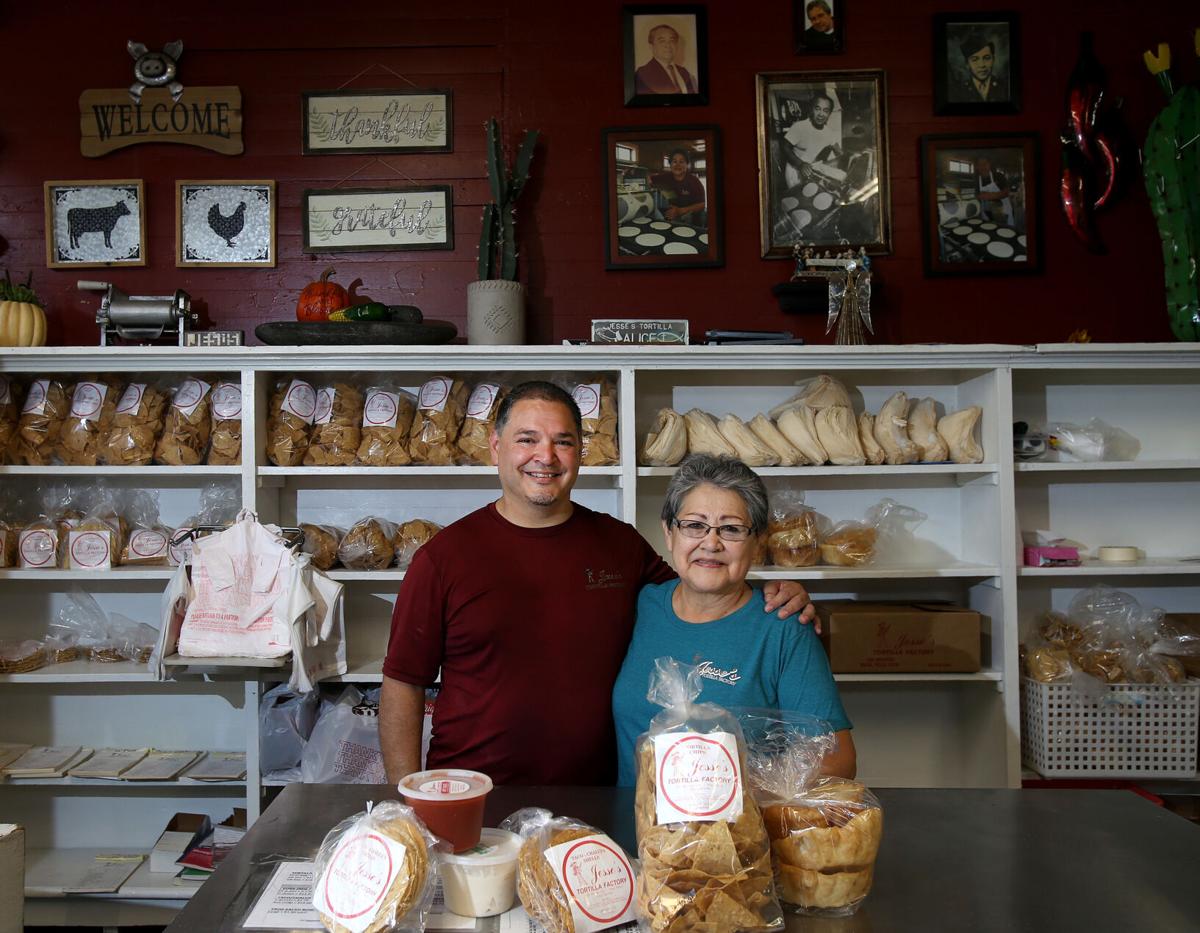 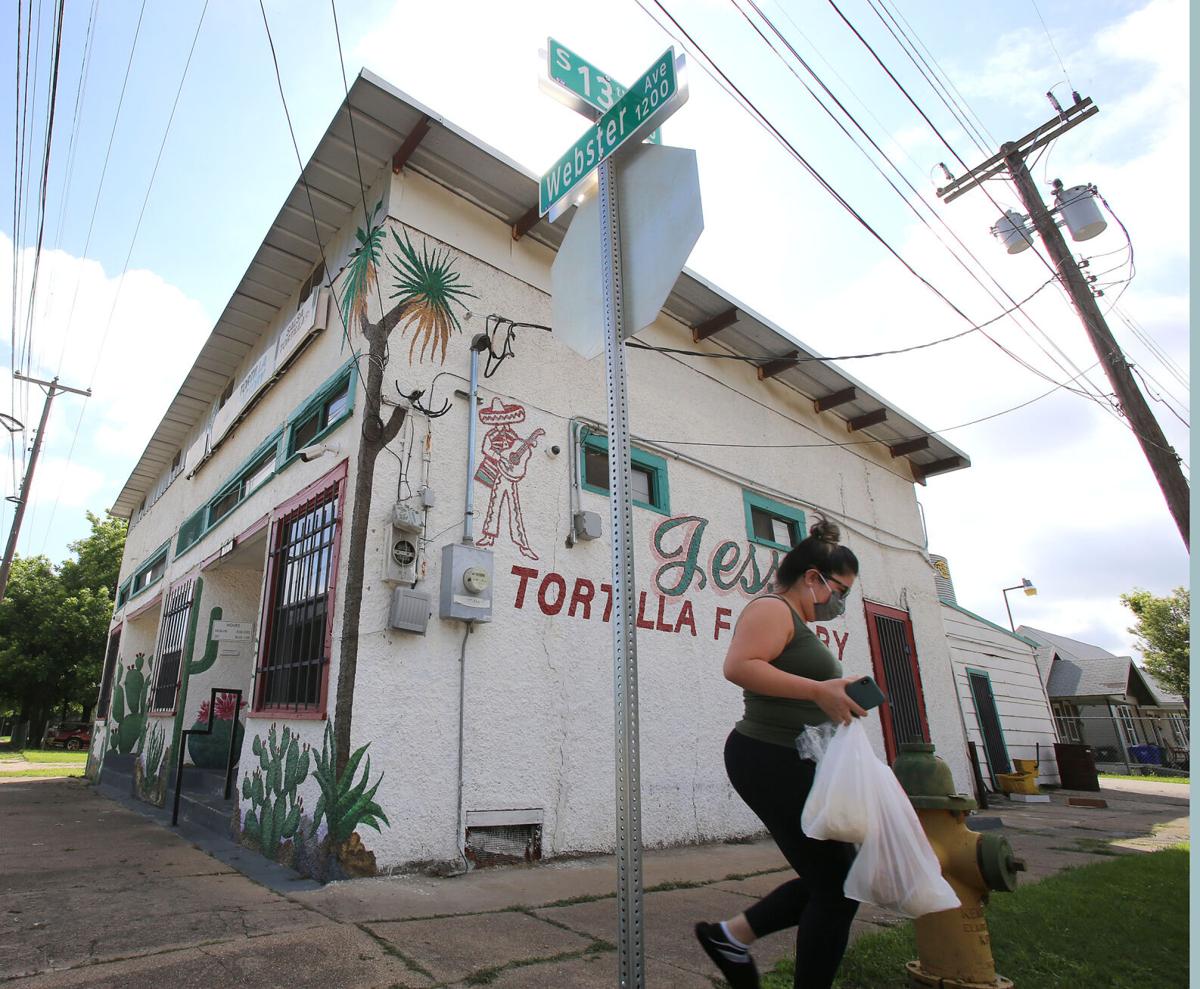 A customer leaves with her purchase of tortilla chips and other items from Jesse’s Tortilla Factory at the corner of Webster Avenue and 13th Street. 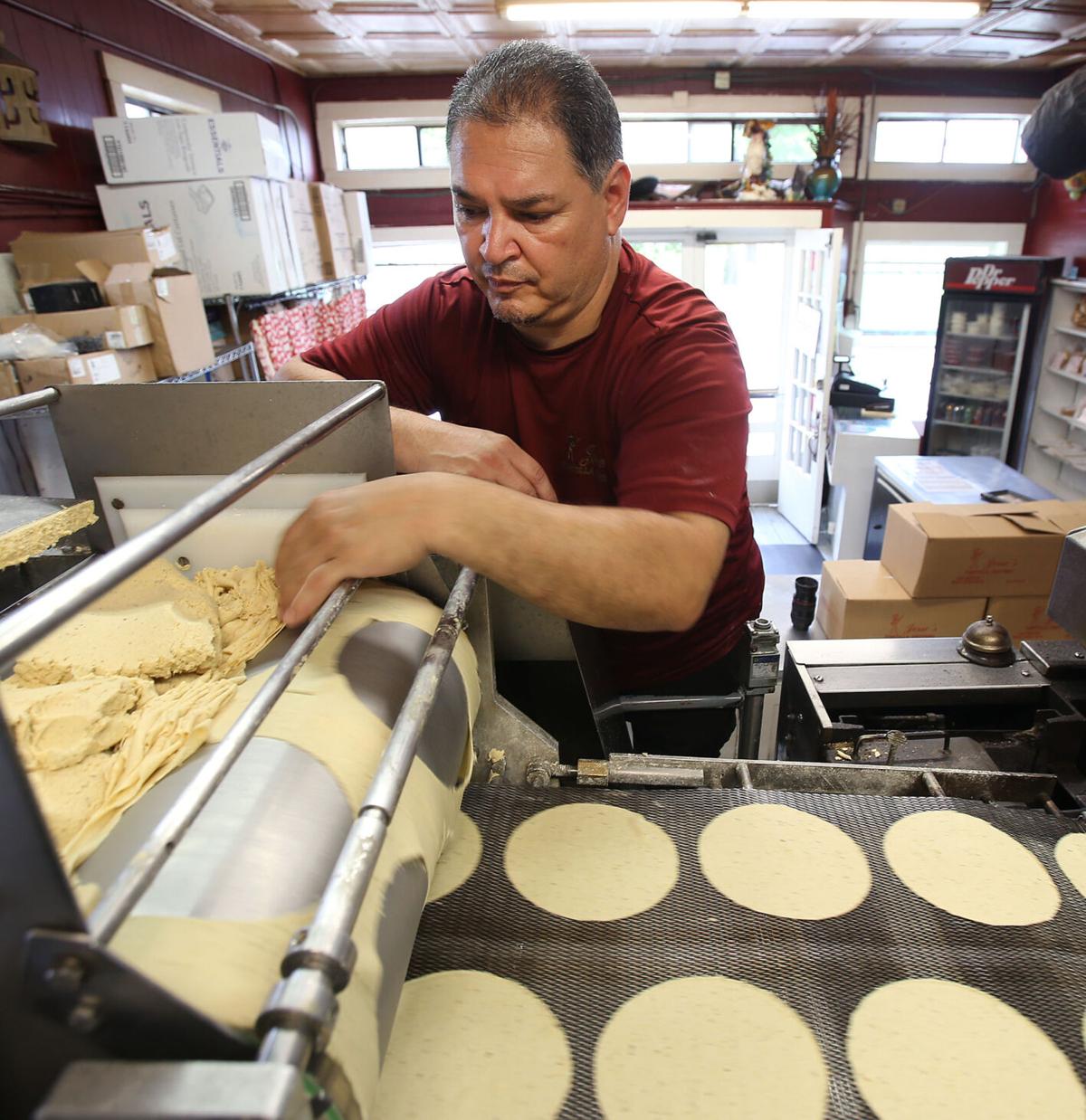 Santos Rodriguez checks on the round corn maza as it comes off the extruder and onto the conveyor belt of the tortilla machine. 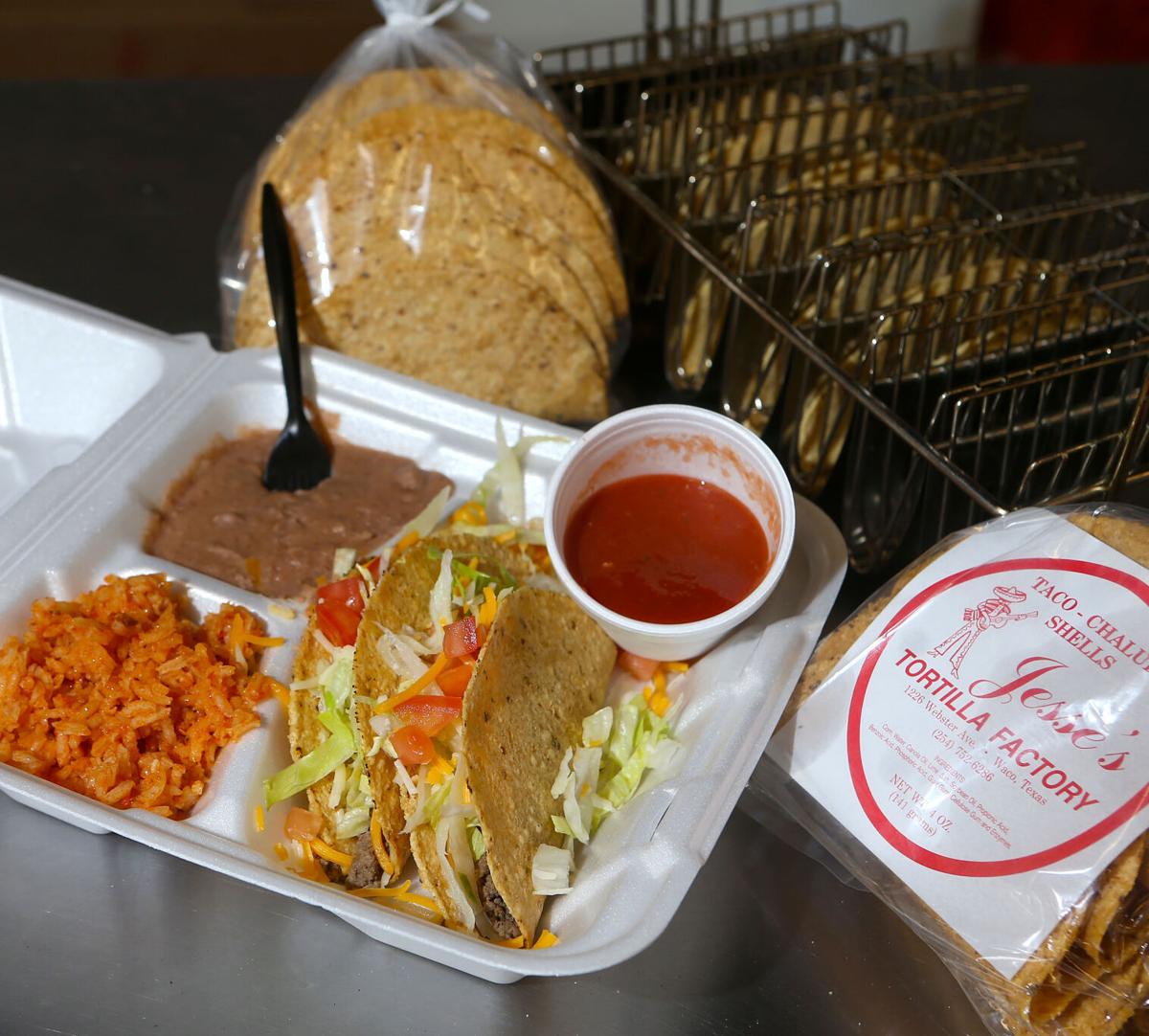 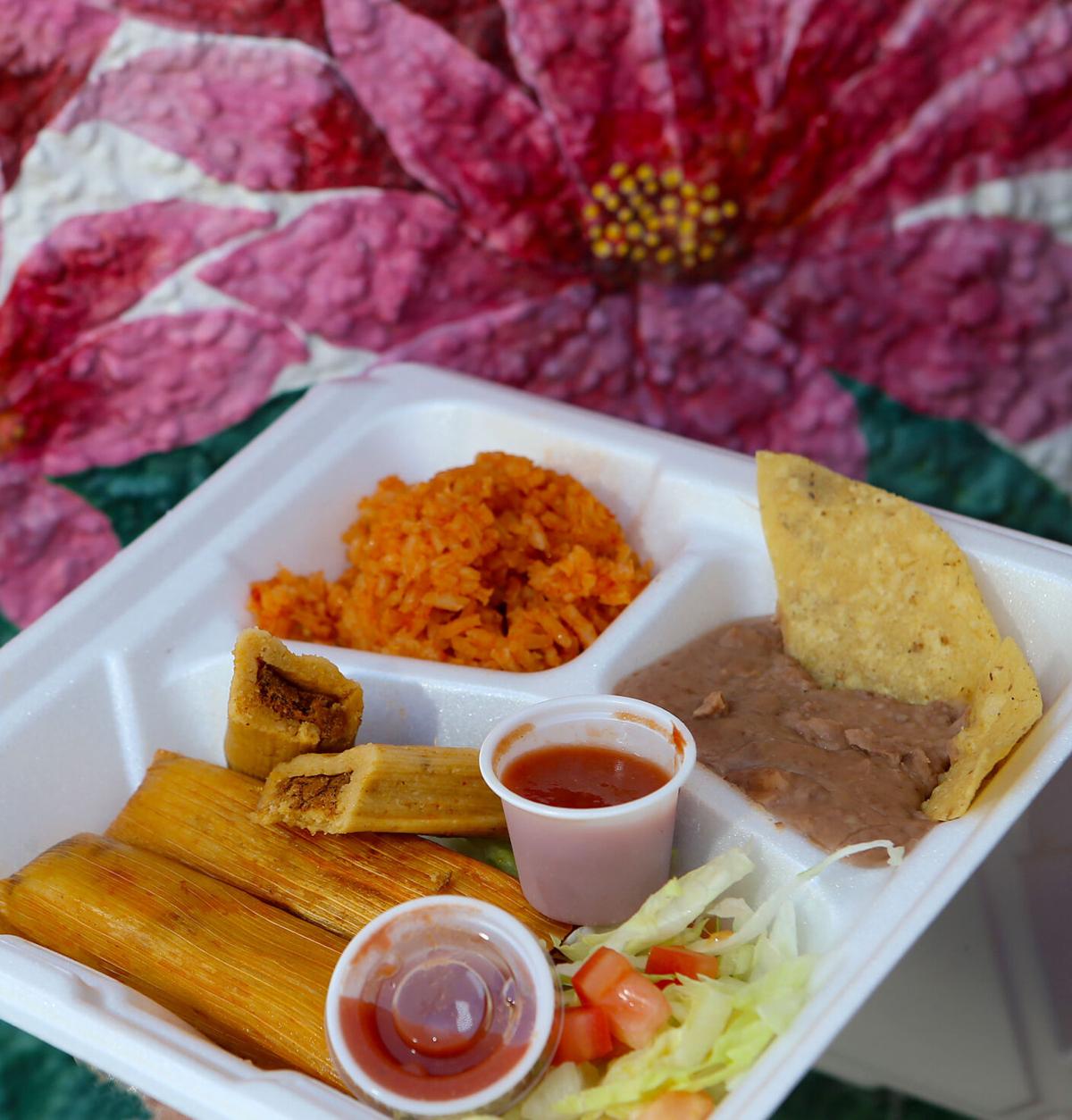 The lunchtime tamale plate has three pork or spicy pork tamales, along with rice, beans, chips, salsa and a drink for $9.95. 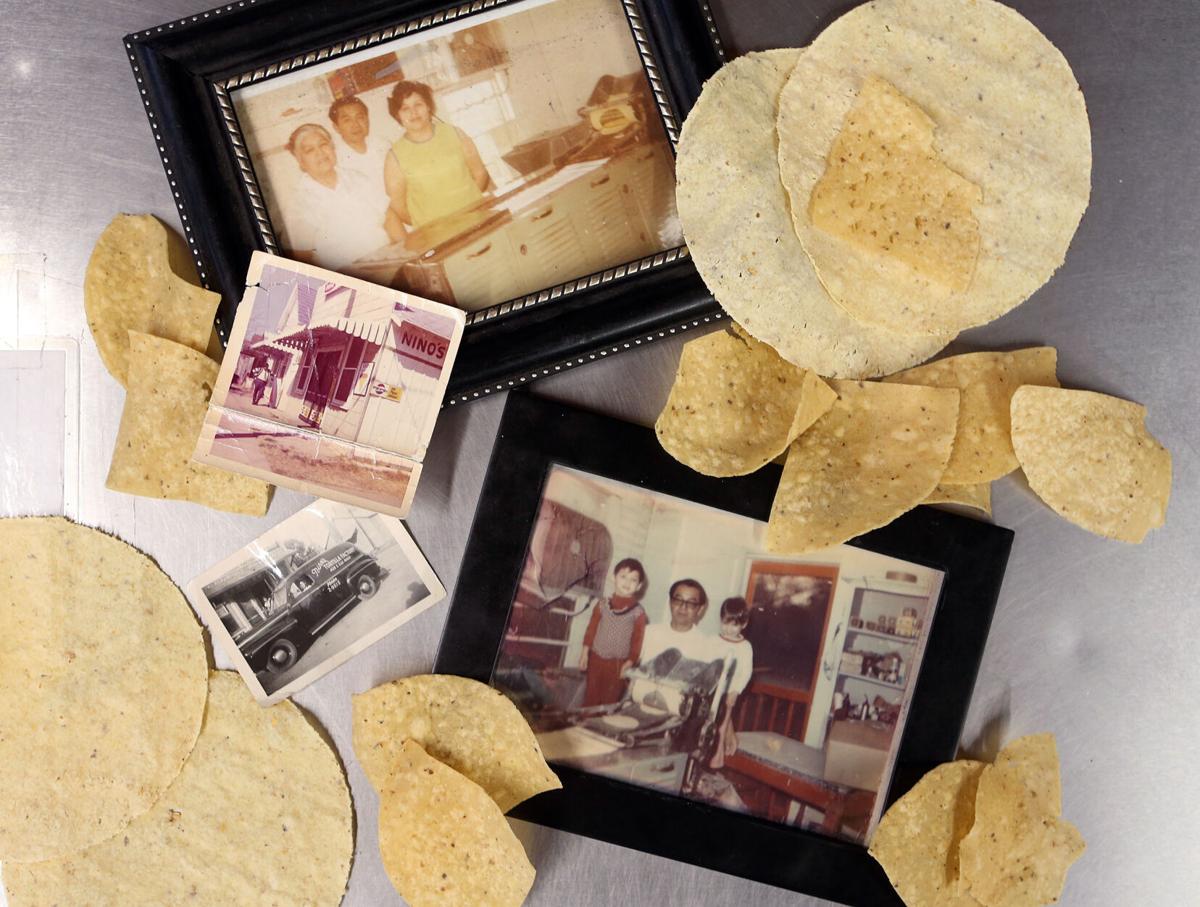 The early days of Jesse’s Tortilla Factory are captured in vintage photos displayed at the business. The top photo shows Alice Rodriguez’s parents, Jesse and Esther Nino Contreras (center and right) with Jesse’s mother, Bonifacia Contreras. The smaller photo is of the store at Second and Webster run by Herma Linda Nino, Jesse’s mother-in-law. The bottom photo is Jesse Contreras with grandsons Santos Rodriguez (left) and Rene Rodriguez. 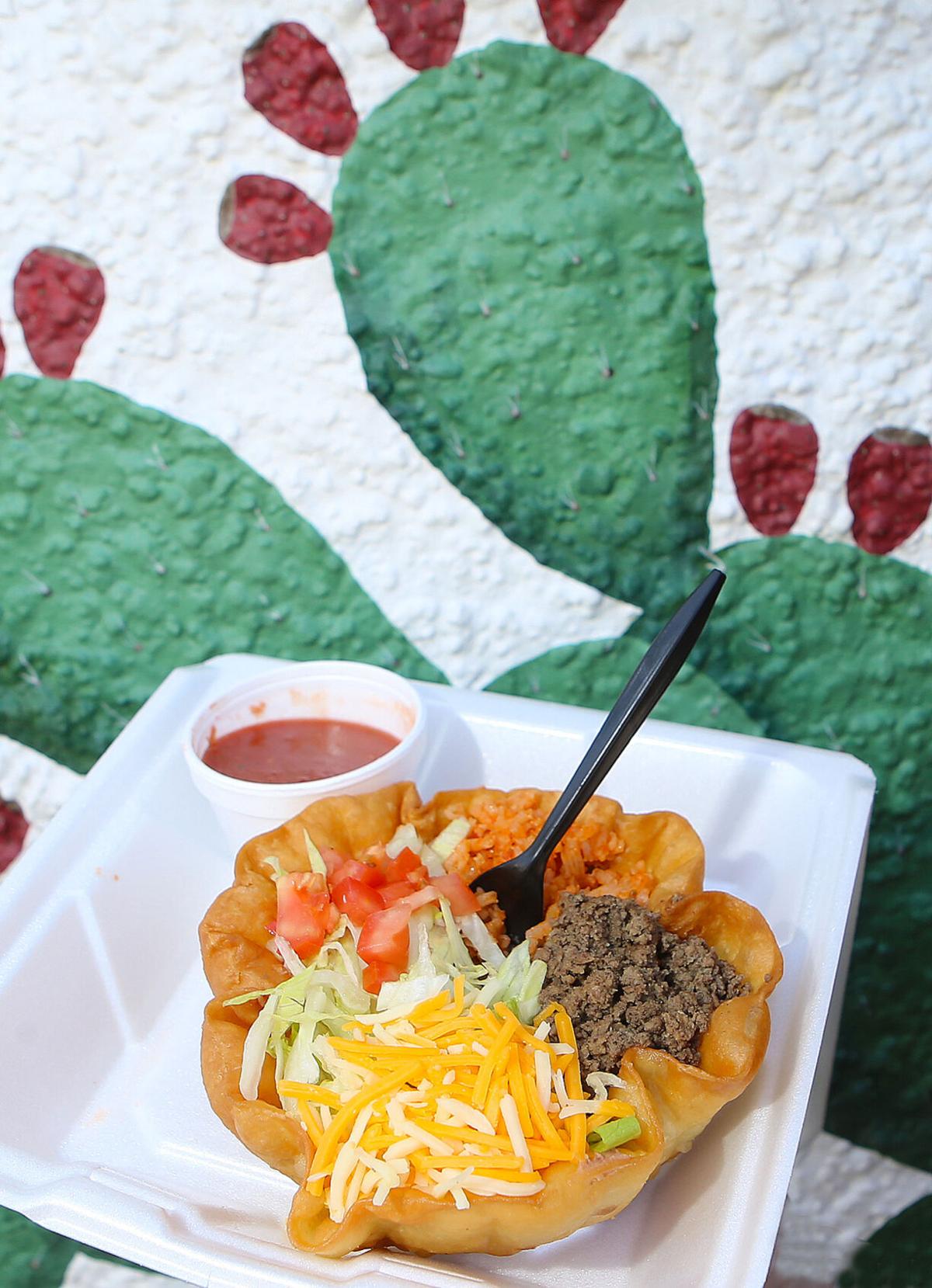 The taco salad is one of the lunchtime meal options at Jesse’s. It costs $5.95 (does not include chips or salsa). 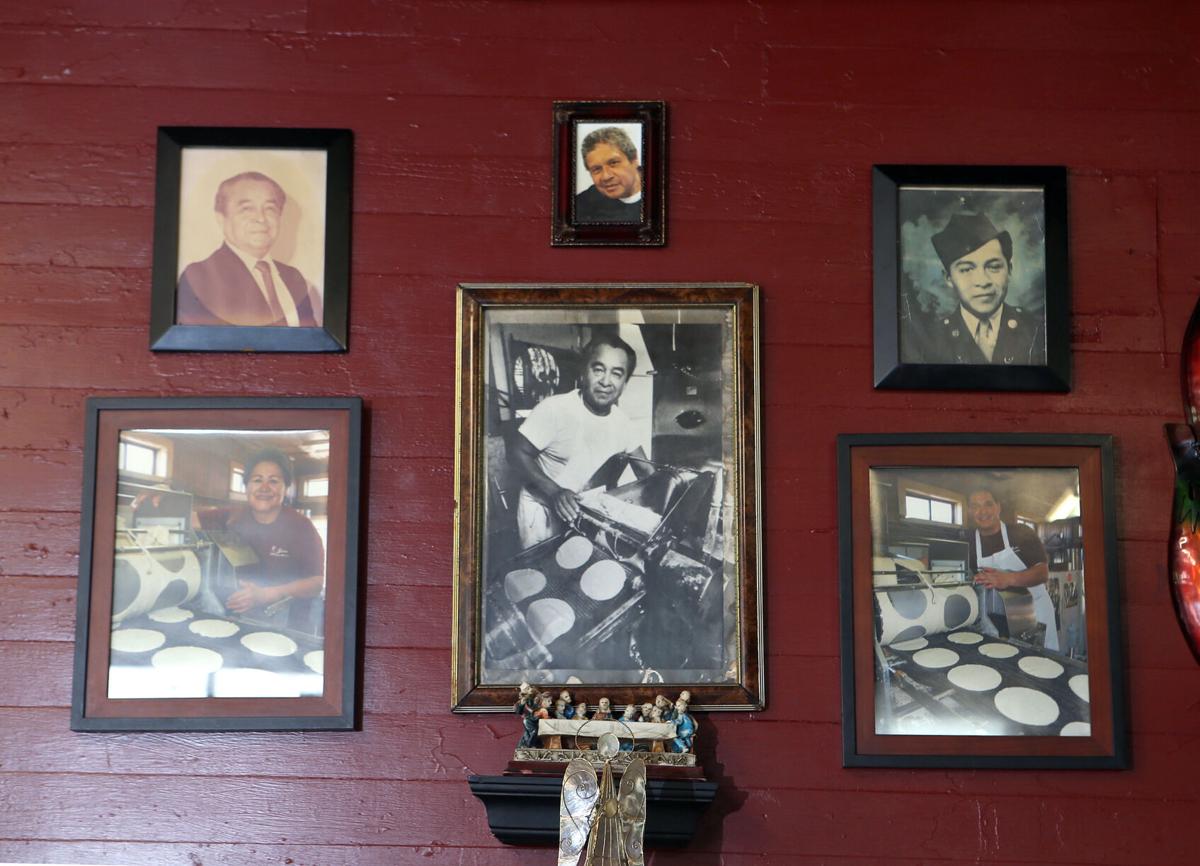 The wall above the shelves at Jesse’s Tortilla Factory shows family members of the business and the tortilla machines they used. 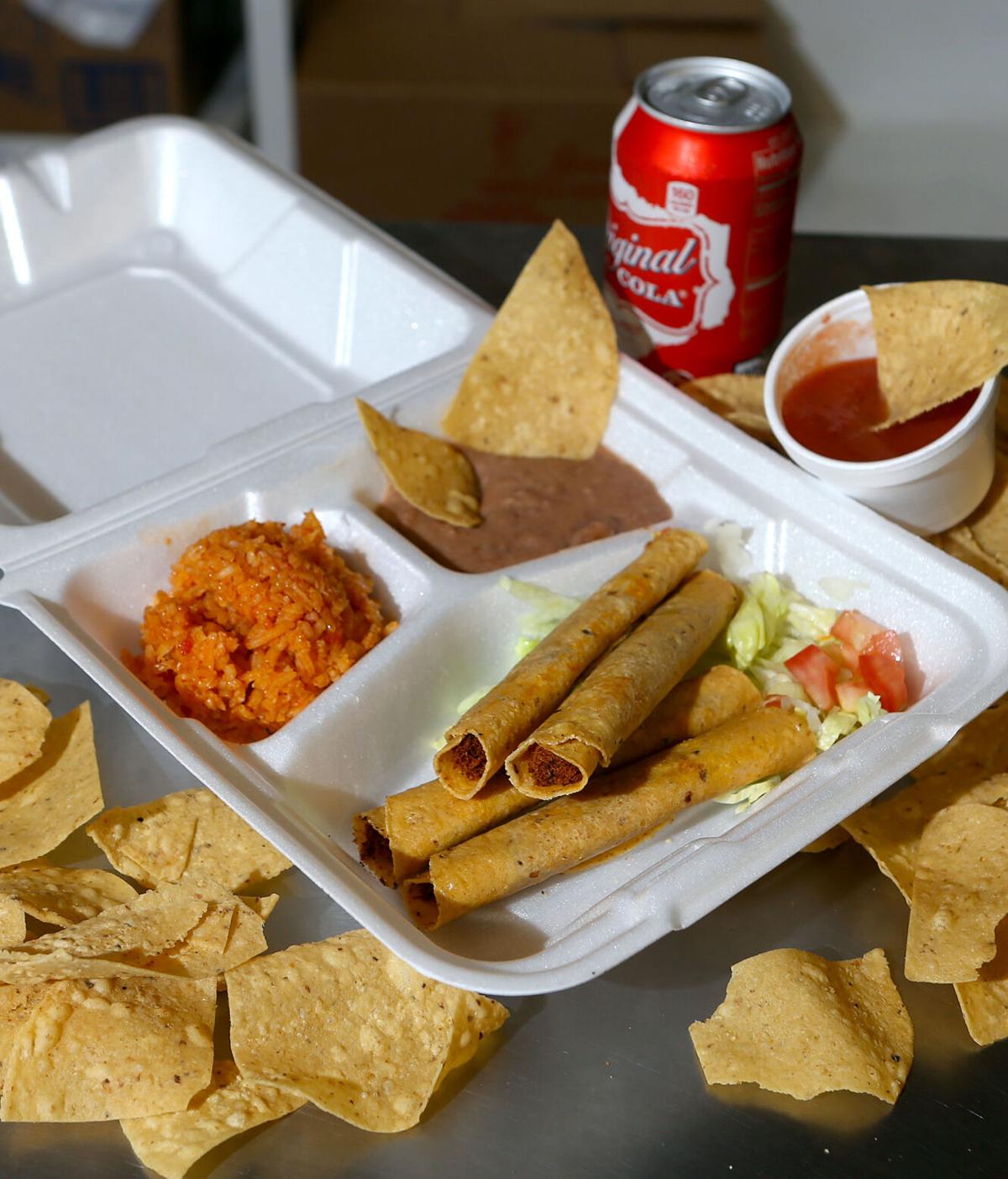