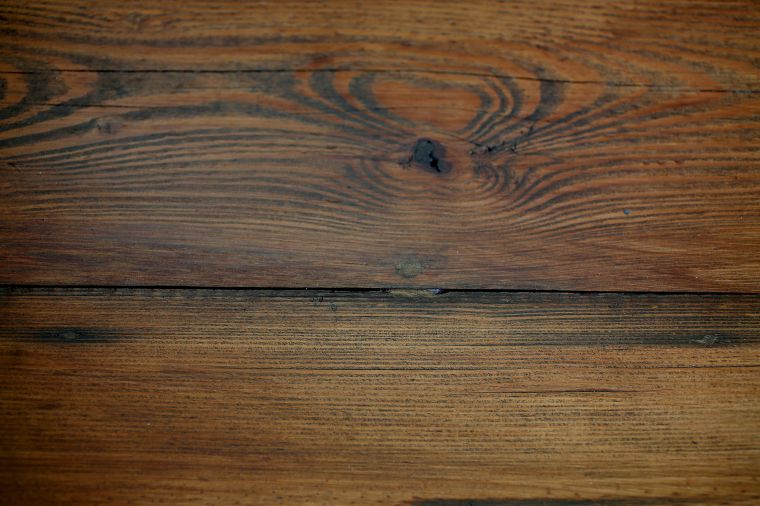 This tabletop of reused wood shows the beauty of its age, knotholes and all. 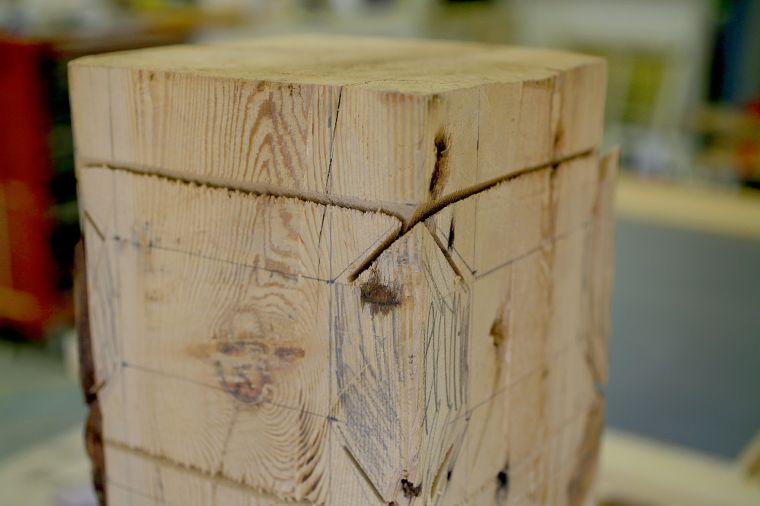 The designers have sketched a new look for this chunk of wood. 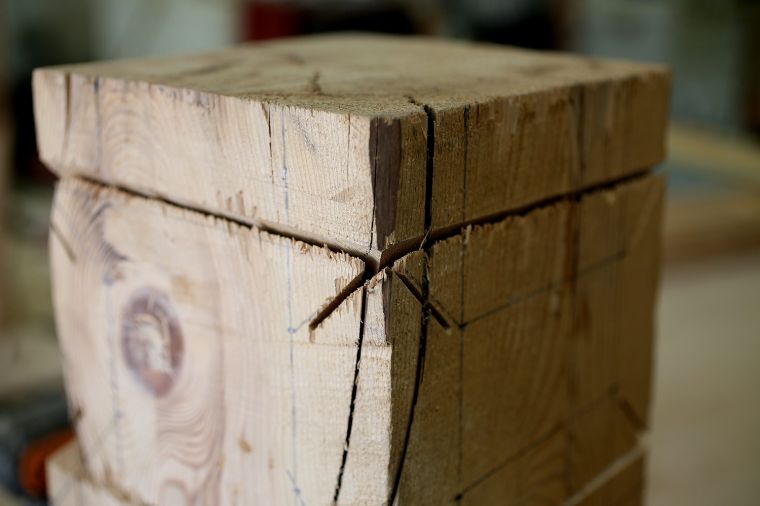 The designers have scored where they will make cuts to this chunk of wood. 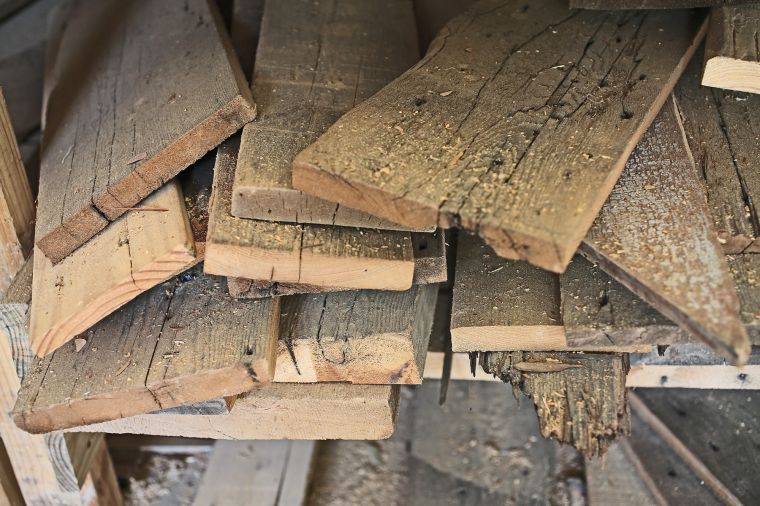 A pile of used lumber awaits a new purpose at Harp Design Co. 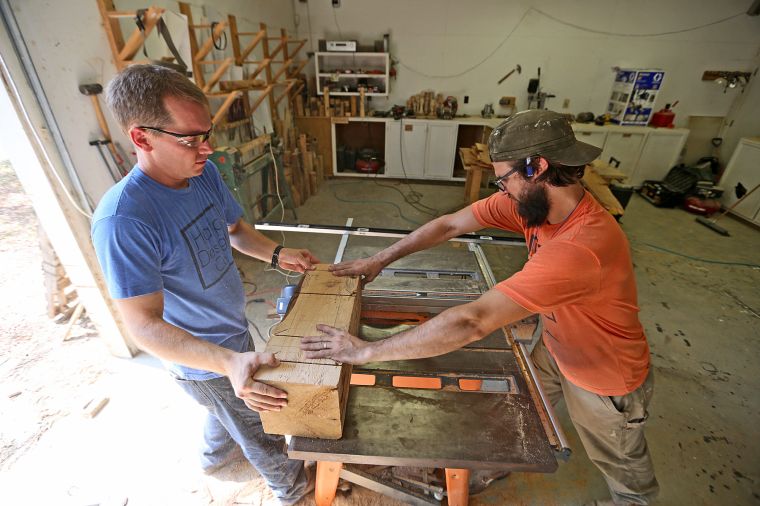 Clint Harp (left) and Britt Duke line up a block of wood to begin making cuts to it. 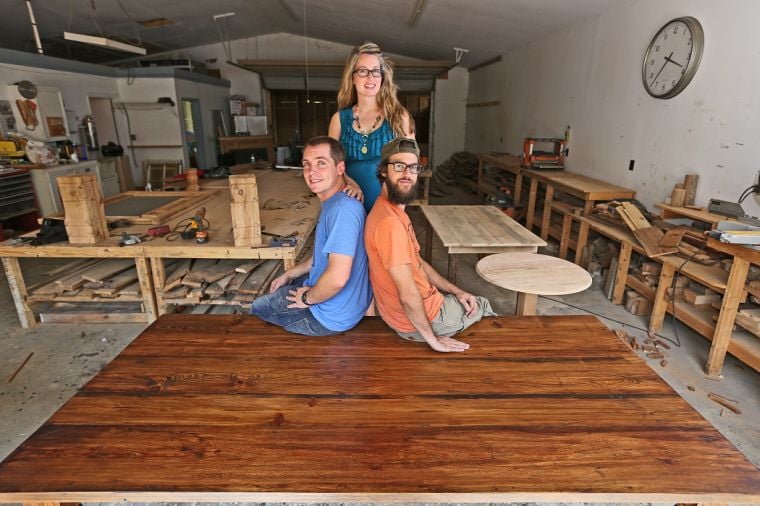 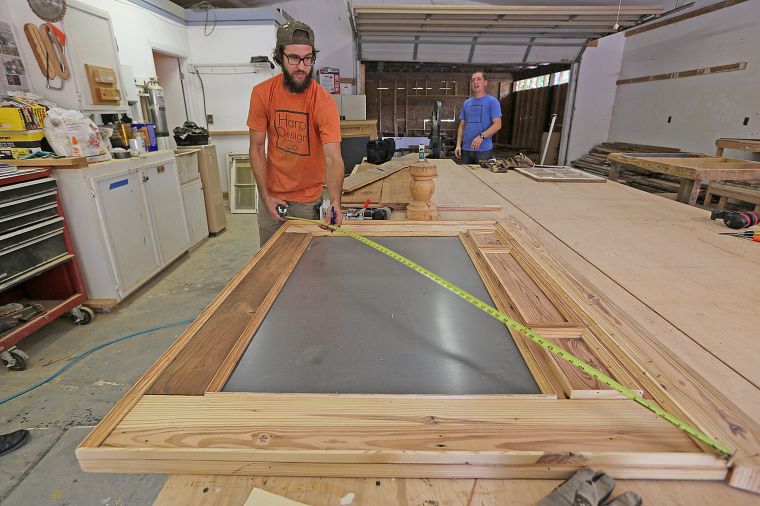 Co-worker Britt Duke measures the diagonal width of a piece that incorporates a blackboard at its center. 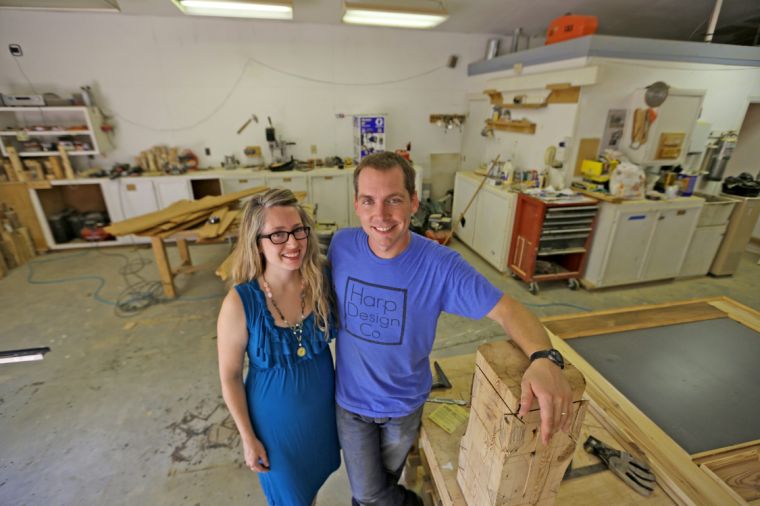 Harp Design Co. owners Kelly and Clint Harp at their workshop on 15th Street in Waco. 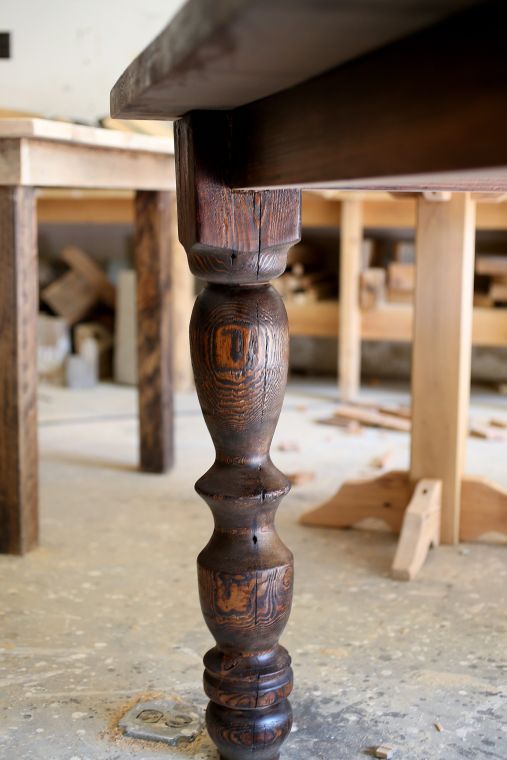 This beautifully finished leg of a completed table shows how nice recycled wood can look.

Viewed at a distance, the beautiful furniture made and sold by Waco’s Harp Design Co. might appear to be new pieces crafted from the finest of virgin woods. But if you look a bit closer, you can see the obvious wear and imperfections of what’s sometimes called “distressed” wood.

However, the furniture that Harp Design owners Clint and Kelly Harp sell is not created by assembling pieces from new wood and then somehow faking it -- making it appear old and distressed by treating it with chemicals, or giving it a vintage look by wearing it down with tools. All the couple’s pieces are handmade from reclaimed wood, and thanks to the recycled furniture’s inclusion in a new HGTV home-remodeling program, the pieces are gaining a wider audience.

“We’re taking wood that’s basically been left for dead and giving it new life,” Clint said. “We’re transforming it into something that can be used by a family for generations.”

The Harps met while students at Baylor University in the late 1990s. After graduation, they married and spent the next decade starting a family that would eventually include three children, living both in Texas and in Europe.

Time for a change

The impetus to start a company came while Clint was pulling down a six-figure salary in Houston as a medical salesman. He realized that while the job gave his family a comfortable lifestyle, it left him miserable and unfulfilled.

“Kelly and I went through a process of asking what we were doing with our lives,” Clint said. “We decided that this was not what we wanted to do.”

Clint’s grandfather, an experienced homebuilder in Georgia, had nurtured his grandson’s love of woodworking, and as an adult Clint had taught himself to build furniture in his garage. In 2011, he and Kelly finally agreed that he should quit his sales job and then figure out a way to pursue his dream of making furniture.

“I knew how much he didn’t like his job, and so I really wanted him to be happy,” Kelly said. “But it was really hard.”

Around the same time, Kelly was accepted into a master’s degree program at Baylor, so the family moved back to Waco.

“We liked Waco, and it felt a little bit like a homecoming,” Kelly said.

Still living on savings and without a clear idea how to proceed, Clint decided to put his woodworking skills to use as a volunteer with Waco’s Habitat for Humanity. In early 2012, a friend of his taking a college business class offered to draw up a business plan detailing a furniture-making business, and that spurred Clint to begin trying to find shop space in town.

“My idea (for the business) was to build furniture out of reclaimed wood,” Clint said, noting that recycled wood was not only environmentally beneficial, but much less costly to obtain than wood purchased from a lumber store.

“Also, we lived in Europe several years ago, and we were very influenced by the way people there live,” added Kelly, a native of Tyler. “People use what they have and recycle everything.”

The Harps ended up renting the former Habitat for Humanity cabinet workshop on North 15th Street, and Clint began making furniture there from wood he obtained from a variety of sources. Some was used wood that factories were preparing to throw away or burn. Other wood came from discarded pallets used to secure materials on for shipping.

“I found large stacks of solid oak and pecan — even walnut — that were used to make pallets,” Clint said. “You normally would pay top dollar for this, and I can get better quality stuff than you could buy at Home Deport or Lowe’s, for free.”

Clint also arranged to get wood from houses that were being demolished around town. When Robert Tunmire, the owner of two historic mansions on Columbus Avenue, decided to demolish one of them — the Shear-Callan House — he gave some of the wood salvaged from the house to Harp Design for use in making furniture.

The only types of wood Harp rejects outright are poor quality pieces and wood treated with chemicals.

After transporting the reclaimed wood back to the shop on North 15th Street — which the Harps eventually bought — Clint must tear it apart into individual pieces, remove any nails and staples and then run it through a cleaner, all of which requires a lot of time and sweat.

Clint and his sole employee, former Habitat for Humanity carpenter Britt Duke, a native of Gilmer, make each piece of furniture by hand. Even parts such as table legs, which some furniture makers simply order from a catalog, are turned one by one on a lathe.

Clint still keeps the first leg he ever created in his shop as a reminder of his early days learning to use the lathe and other power tools. It’s now adorned with colorful stickers put on by his children. Son Hudson is 6 and daughter Holland is 3. The Harps’ newest addition, Camille, was born in December.

An important element of the Harp’s business mentioned at length on their website (www.harpdesignco.com) is the couple’s desire to give back to their community. When he is able, Clint will build a bed or table and donate it to a local charity to give to a family in need.

“A lot of kids dream about sleeping in a bed, instead of on the floor with the bugs at night,” Clint said. “My thought is while I can’t save every kid, when I get the opportunity, maybe I can help one or two kids to change their dreams from sleeping on a bed to going to college one day.”

Business on the grow

Through word of mouth and referrals from satisfied customers, Harp Design slowly began to sell more and more furniture around Waco. The way that the company’s creations made their debut on a national television show is another example of the serendipity that seems to follow the Harps.

A chance meeting at a gas station led to a close friendship between the Harps and Chip and Joanna Gaines, the Waco couple whose HGTV remodeling program “Fixer Upper” is now in production.

Before the HGTV show came about, Joanna Gaines had asked Clint to make furniture she would design and then sell in her Magnolia Homes shop in Waco. The furniture line, which is sold under the name Magnolia Farms Furniture, has gotten a good response from customers.

“Clint has exceeded our expectations. He has become a self-taught connoisseur of wood craftsmanship,” Chip Gaines said. “We have been thrilled with his product, and the clients we have referred to him have been thrilled.”

When HGTV asked the Gaineses to film the pilot episode of “Fixer Upper,” Joanna asked Clint to build three pieces of furniture for the house being renovated, including a custom Vent-a-Hood cover and an outdoor table made from old wood salvaged from the house itself.

“I actually got to be on the show for 10 seconds or so,” Clint said. “I knew my mom (who lives in Georgia) was going to be really happy.”

During the next year, the Harps plan to open a showroom at their shop to allow them to show off their creations, and land contracts with wholesalers in Central Texas. Kelly, who designs textiles and clothing, hopes to be able to find more time for designing and selling those items.

Harp Design will continue to provide furniture for the houses featured in “Fixer Upper,” but that will be icing on the cake for Clint and Kelly next to the real ingredient that has made their furniture business so fulfilling –– satisfaction in doing what they feel led to do.

“The TV thing is fun, but take that away and we are still doing what we love,” Clint said.

Persons of the Year: Chip & Joanna Gaines showcase Waco in all they do

It’s their uplifting take on the city, one that they are quick to share with others, that earns them recognition as the first Persons of the Year by Waco Today magazine.

A nationally known Waco renovation firm plans to turn a piece of the city’s agrarian past into a market with craft goods and food trucks.

A downtown incentives board gave its blessing Wednesday to HGTV stars Chip and Joanna Gaines’ vision of turning a century-old Waco cottonseed mill into a festival marketplace.

Score a win for urban grit.

A once-blighted North Waco house that was resurrected on national television will soon be home to a single mother, her daughter and lots of babies.

HGTV stars get TIF funds for Magnolia Market, as does Doris Miller Memorial

The viewing public apparently can’t get enough of Waco’s Chip and Joanna Gaines, with HGTV announcing the couple will begin taping 13 more epi…

As work continues on turning the collection of rusty silos at 601 Webster Ave. into a multiuse area downtown, Chip Gaines said he and his wife…

The grand opening of the downtown Magnolia Market is nearly two months away, but fans of the growing home décor empire already are flocking to…

Cable viewers Tuesday can see the Season 3 debut of “Fixer Upper,” the HGTV home improvement reality show that continues to make its own reali…

With popularity from ‘Fixer Upper,’ Harps’ ‘Against the Grain’ pilot set to air

Waco’s Clint and Kelly Harp are no strangers to television’s limelight, having been featured in HGTV’s hit series “Fixer Upper,” but on Tuesda…

Clint and Kelly Harp, featured personalities on the HGTV series “Fixer Upper,” get a second shot at their own television series Wednesday even…

This tabletop of reused wood shows the beauty of its age, knotholes and all.

The designers have sketched a new look for this chunk of wood.

The designers have scored where they will make cuts to this chunk of wood.

A pile of used lumber awaits a new purpose at Harp Design Co.

Clint Harp (left) and Britt Duke line up a block of wood to begin making cuts to it.

Co-worker Britt Duke measures the diagonal width of a piece that incorporates a blackboard at its center.

Harp Design Co. owners Kelly and Clint Harp at their workshop on 15th Street in Waco.

This beautifully finished leg of a completed table shows how nice recycled wood can look.