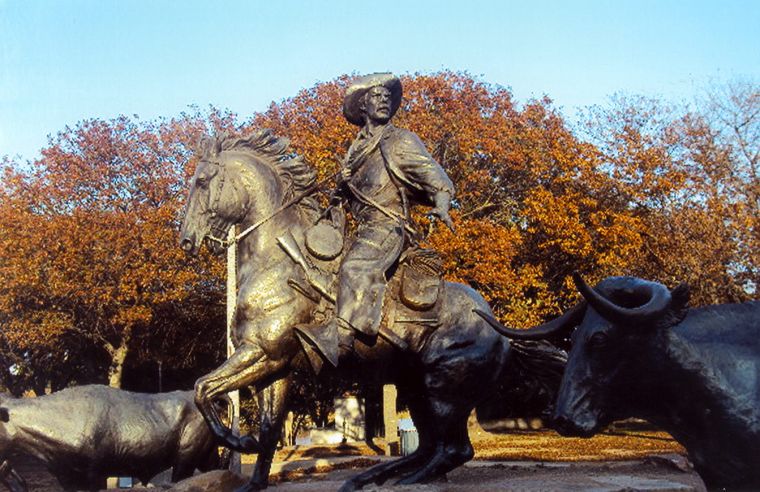 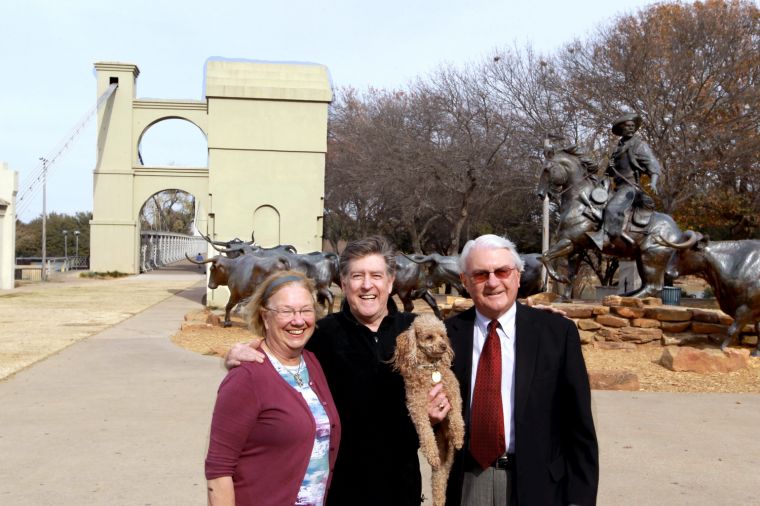 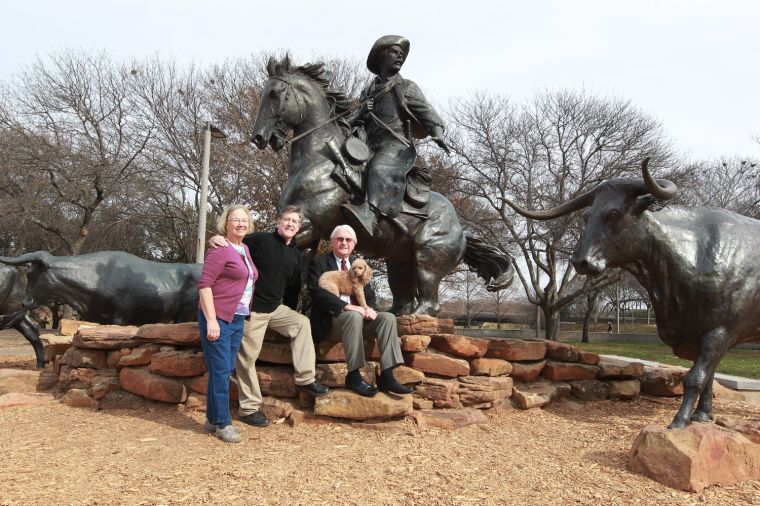 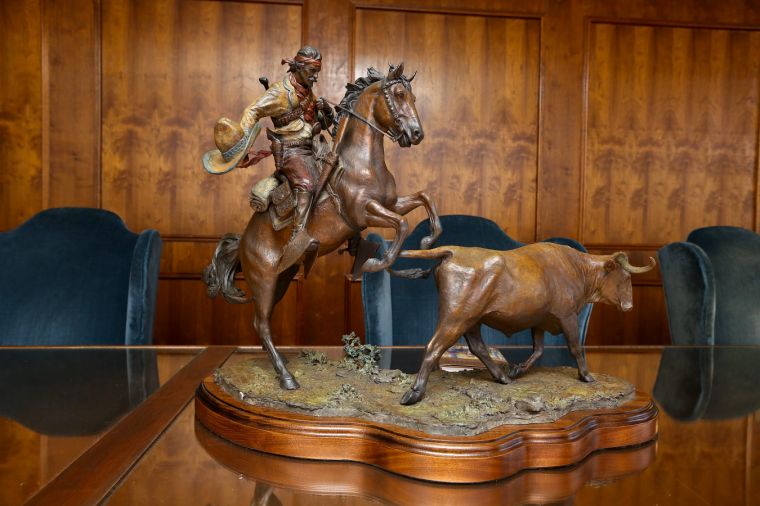 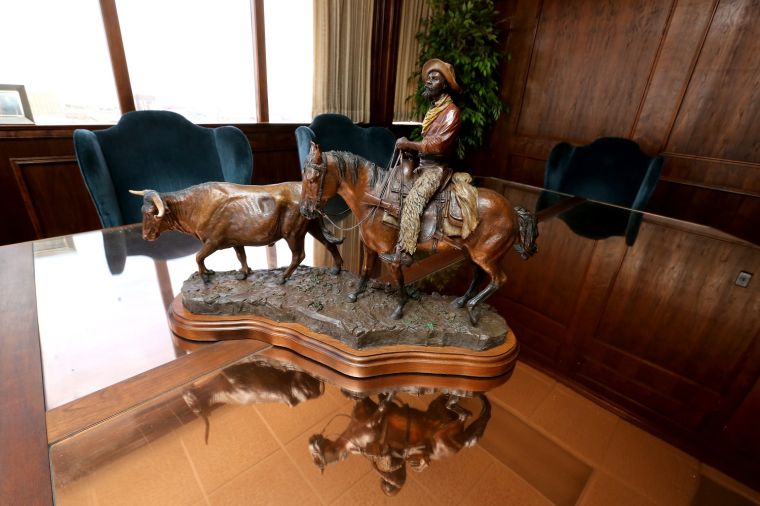 Wacoans have received a bequest so eloquent, so all-encompassing, that it takes the viewer a moment to grasp its meaning. It’s a herd of heroic-sized Texas longhorns and a mounted cowboy looking so lifelike, it’s as though real creatures have been dipped in bronze and frozen in time. The only thing missing is the stirring golden dust and sounds of animals and men as they approach the Waco Suspension Bridge on their way north.

Clifton Robinson is the visionary who undertook this project; Robert Summers is the artist who brought the project to life. As Robinson explained, “My vision for a longhorn herd originated in downtown Dallas in 1980. I often walked through a park near city hall and became enchanted with the longhorn statuary there. I thought that they would be more appropriate for Waco, since our suspension bridge was the focal point for the Chisholm Trail, not Dallas, a city which had nothing to do with cattle drives of the 19th century.”

Then, Doreen Ravenscroft, president and executive director of Waco Cultural Arts, approached Robinson about helping purchase a piece of public art — now located near the convention center— for a Waco Cultural Arts project.

“I agreed to help, but I told Doreen I had something bigger in mind than a single statue,” Robinson said. “I saw the possibilities of working with her to create an entire herd of cattle and position it near the Waco Suspension Bridge.”

From there, it was a trip to Dallas to study the bronze cattle, then approach Summers, an artist in Glen Rose.

“Those Dallas statues showed the cattle to be skinny, but I proposed that we have well-fed cattle for Waco,” Robinson said. “You have to remember that those massive 19th-century cattle drives from Texas up north to Kansas were not made in one straight, uninterrupted run. The drivers knew that the cattle had to graze, water and rest occasionally so that the herd could arrive at the final destination healthy and not emaciated.”

Sculptor Summers knew from the beginning that there was a need for mounted riders among the herd. “As of now, we have one cowboy in place at the head of the herd, but ultimately, we will have two others,” he said. “To be historically correct, we will include a black drover and a Mexican vaquero.”

Already in place is a lone cowpoke at the head of the herd as it enters the bridge. He’s perfect in every detail. Look at the equipment he carries on his horse’s back: a canteen, saddle bags, bed roll, a rifle ... each object carefully delineated. The fellow is appropriately dressed in chaps and wide-brimmed hat. The horse ripples with frozen energy as it begins to rear up, his mane and long tail fluttering in the wind.

Summers said the Mexican vaquero (Spanish for cowboy) soon will be installed.

“He’s a dashing figure with a flowing mustache and a great sombrero who would have ridden as the ever-alert guard for the herd. It was his duty to keep an eye out for rustlers, so I have him heavily armed: a 12-gauge shotgun, a sawed-off shotgun, a bandoleer and a short sword. His horse is rearing up on his back legs, which is always a challenge to a sculptor. I stabilized the horse by connecting one leg to a nearby steer.

“The drover’s statue, which will be positioned at the very end of the herd, is based on a real-life black cowboy named Holt. This man had a fearsome reputation as a bear hunter, having accompanied President Theodore Roosevelt on three such hunts. I’ve depicted him in woolly chaps.”

Ravenscroft expressed her own excitement about the project.

“Using public art to bring a moment in history back to life ignites imaginations,” she said. “It is wonderful to see so many people of all ages taking a moment of their busy lives to contemplate this incredible work of Robert Summers. Enjoy it, take photographs, and stand in awe at the size of this historical monument.”

Each animal in the herd will be branded with the city of Waco’s symbol. Those of Robinson will feature the brand of his own ranch, the Rocking R Ranch. Other donors will have their individual brand on their steer.

Robinson explained the matter of brands, most important for identifying the owners of the cattle.

“In the 19th century, a rancher would apply his own personal brand to his animals and when they joined a group effort of several neighboring ranches, a second brand was added to identify that particular herd,” he said. “As the herd was driven north, they might meet several other herds and for safety’s sake, travel together. Once at the destination, the mingled cattle could then be sorted out and the owners compensated.”

Branding of animals goes back to the days of the Egyptian pharaohs. Customarily, all cows and camels were branded with the owner’s symbol. Drawings of such branding activities quite similar to ours can be seen today in ancient Egyptian tomb murals thousands of years old.

Studying the herd and the cowboy, the viewer is astounded at the realistic beauty of each individual animal. Each has its own distinctive stance, varying horn length and unique shape. They are all cast in dark bronze, meant to last for the ages.

All are being directed into the entrance of Waco’s historic suspension bridge, the first to span the Brazos River. Designed by J.A. Roebling and finished in 1869, it pre-dates and is considered the prototype of Roebling’s famous Brooklyn Bridge.

The trail that led through the Waco Suspension Bridge came to be known as the Chisholm Trail, each animal costing 5 cents to cross. Even at that price, herd bosses knew the value of a bridge: time saved and fewer hazards rather than trying to direct the cattle across a rushing river. Thus, the Waco bridge became the focal point for many of the herds being driven north, spurring the rapid growth of the little community.

Many businesses associated with driving cattle developed in that part of Waco next to the river: blacksmiths, feed lots, eating and drinking establishments and stores that stocked supplies for the long run up north.

Summers began the monumental task of creating Waco’s longhorn herd 10 years ago, and is still busy with the project. Understandably anxious, Robinson is always inquiring when things will be completed. Summers explained that when Michelangelo was painting the ceiling of the Sistine Chapel for Pope Julius ll, the pope complained about the many delays.The great Renaissance artist, known to be testy and outspoken, even to the pope, cried out, “I will be finished when I am finished!”

One of the world’s sublime masterpieces, the Sistine ceiling was completed in four years. When finished, Waco’s herd of bronze statues will contain 25 longhorn steers and three horsemen. Hopefully, all will be in place by the end of 2013.

Backing this artistic endeavor includes lead donors Betsy and Clifton Robinson (donors of the trail boss, the vaquero, the drover and three longhorns).

A longhorn was funded by each of the following donors: Nell and Jim Hawkins, Sue and Ted Getterman, Shirley and Mike Lanham, Carol and Paul McClinton, Mary Ruth and Malcolm Duncan, Martha and Tom Salome, Penny and Tom Chase, Gloria and F.M. Young, the Dossett family, Valerie and Gordon Robinson and family, and Central National Bank.

Also lending their expertise with this project are Lawns Limited Landscaping, Wales Industrial Service Inc., rbdr PLLC, the City of Waco, and Deep in the Heart Foundry of Bastrop.