Whether you’ve moved into a house that requires work or need to address changes to your existing home, renovations are a part of homeownership.

It could be a sudden necessity, like damage from flooding, or just needing to rework the layout for a growing family.

Those renovations can be large or small, and you may or may not have the skills, tools or time to do the job yourself.

For some people staying at home during the pandemic, that became a time to think about getting some needed renovations started.

JP Pizzio, general manager of Circle Hardware, said business at his store was pretty slow initially in the first couple of weeks for sheltering in place, other than selling a lot of bleach as people wanted to sanitize more.

But then things picked up as Circle Hardware was seeing customers coming in for projects with anything from building chicken coops to pergolas, he said.

“We had a lot of people who wanted to start raising chickens, and they’d need to build a shed for the chickens,” he said. “Or then they realized they need to build a bigger shed. We had a run on chicken wire. People from Killeen were coming up here to find chicken wire because they were out of it in Killeen.”

Pizzio said he’s made sure to keep some extra chicken wire on hand in the meantime.

“The contractors were still plugging along, but we did have a number of DIYers coming in, especially when they weren’t able to work,” he said.

“They were here to pick up things to fix leaky toilets, change out a faucet. It was everything. They’d come in with their hardware lists. It could be picking up Sheetrock, getting two sheets of plywood, buying fencing, or material for building a deck.”

Recent weeks have been especially busy at the store, he said. People were buying generators when Hurricane Laura looked like it might hit Texas. As the return to college approached, material and items for doing maintenance on apartments were selling well.

“It’s been an interesting year,” he said.

The bigger jobs, like remodeling a kitchen or bathroom, generally means you’re looking for a contractor, someone who can turn your visions into reality.

“I always listen to my customers with great intent,” said Rose-e Salazar of R&R Remodeling and Construction. “A lot of people find things on Pinterest or they see it on a computer and they want to do something like that.

“I’ll come in with sketches, palettes and ideas to talk about what they want done, when and how much it might cost. I can be a design consultant.”

Salazar said about 95 percent of his projects are remodels, and many of those are full remodels or “total transformations,” where they gut the interior to remake the look of the home.

And what are many of those people looking for?

“The trends I see are what I call the ‘Magnolia effect,’” Salazar said of the style popularized by Chip and Joanna Gaines of “Fixer-Upper” fame.

“A lot of people are transforming their interiors to get that modern look,” he added. “They go with the subway tiles, the shiplap, painted cabinets, quartz tops and such.”

R&R Remodeling is doing a lot of work on the Behrens Lofts, converting those spaces into lofts that reflect that “Magnolia look,” he said.

Beyond having to adjust health protocols due to the pandemic, Salazar said his crews have stayed busy this year.

“It’s been a phenomenal year,” he said.

“We’re a 100 percent referral company,” he added. “Lots of my customers are repeats because they trust what I do, and that’s important to me. I have customers in their mid-20s to the 60s and 70s. We want to be sure we do what we need to protect our clients.”

Salazar has worked in the remodeling industry in 1983.

“I’ve seen the ups and downs, and we’re been successful,” he said. “I credit that to my faith in the Lord.

“We’re able to be a multi-task company because I have a team of people who do a great job. I have two project managers with 50 years of experience, and have used the same subcontractors over the years so they know how we need it done.”

Salazar said he’s humbled to have a waiting list of jobs, some that they won’t be able to start until January. And while not all jobs go as smoothly as they hope, that’s always the goal, he said.

“I’m not perfect, but we work toward perfection,” Salazar said.

At Jim Williams Renovations & Roofing in Robinson, kitchen and bathroom remodels are the bulk of his business.

Since 1996 Williams has worked with homeowners to re-imagine their spaces.

When it comes to renovating kitchens, that usually means making it bigger, he said.

“A lot of homes built in the ’90s and early 2000s had small kitchens, so many people like to have something larger,” he said.

That almost always involves removing walls, he added. To expand some kitchens, he’s had to work into parts of garages, bedrooms and dining rooms in order to give his customers the space they desire.

Every project is about working closely with the customer to deliver what they’re looking for, he said.

As for bathroom projects, many of those have involved transforming the existing bath or shower into a walk-in shower or one with an open shower concept, he said.

People are moving to walk-in showers for a number of reasons, according to home renovators.

One benefit is cleaning as tile and glass tend to be easier to clean that the porcelain usually used in shower interiors. Not having to change dirty and moldy shower curtains also is a plus.

Walk-in showers can generally be designed to fit the space, even for smaller rooms or those with an unusual shape.

Another important benefit is that walk-in showers are more accessible than baths. For family members with mobility challenges, walk-in showers are a great solution, because you don’t have to step over a high ledge. That also can make the home more attractive to a wider range of buyers if you’re looking to sell the home.

Williams said getting thanks and appreciation from the customers for a job well done is a most rewarding feeling.

A welcoming and bright interior is a trend for many home renovations today. The large opening to the bar provides a good view of the kitchen. Photo by R&R Remodeling and Construction. 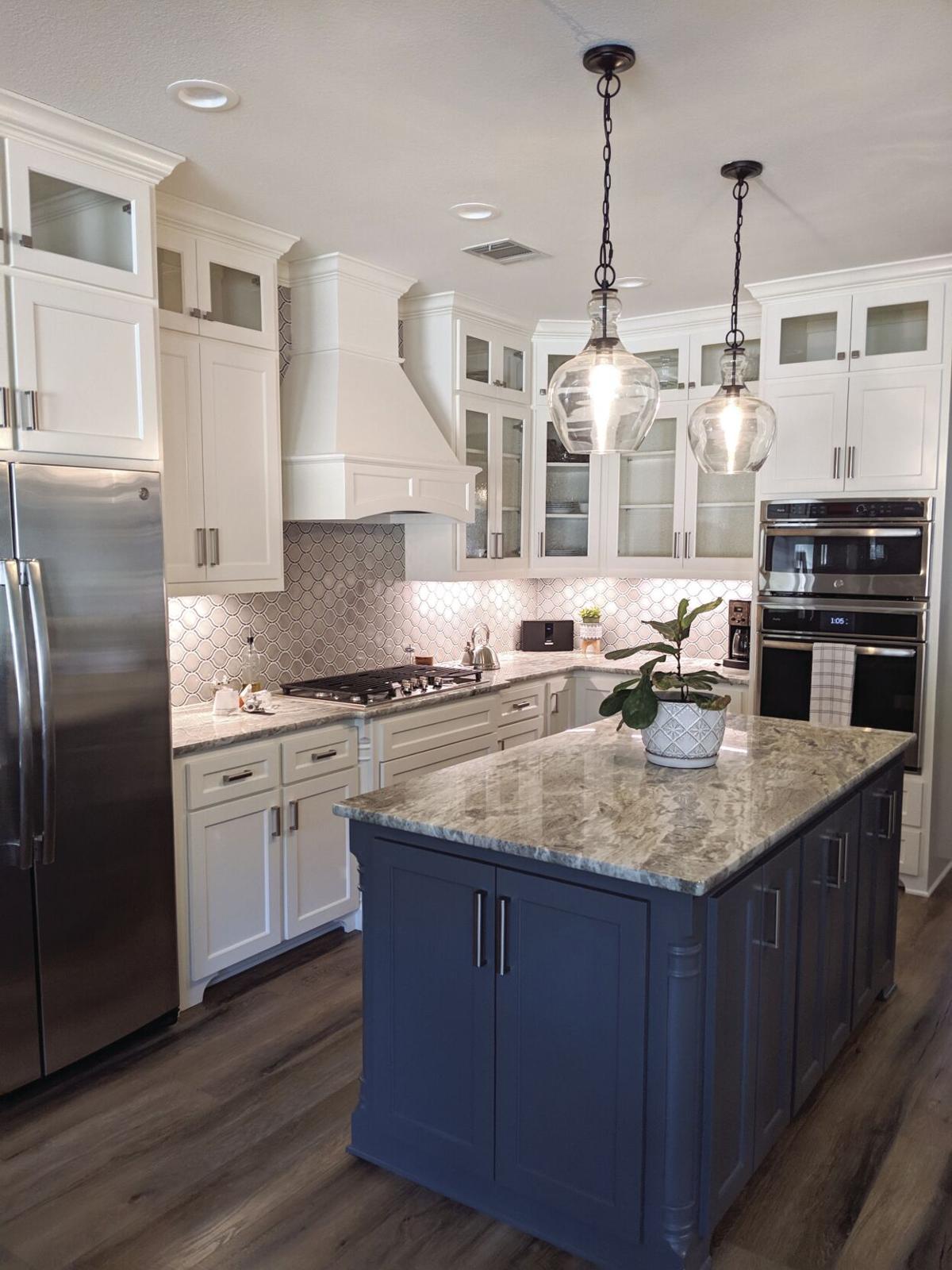 This renovated kitchen is well illuminated with hanging lights as well as recessed lighting around the counter. Photo by R&R Remodeling and Construction. 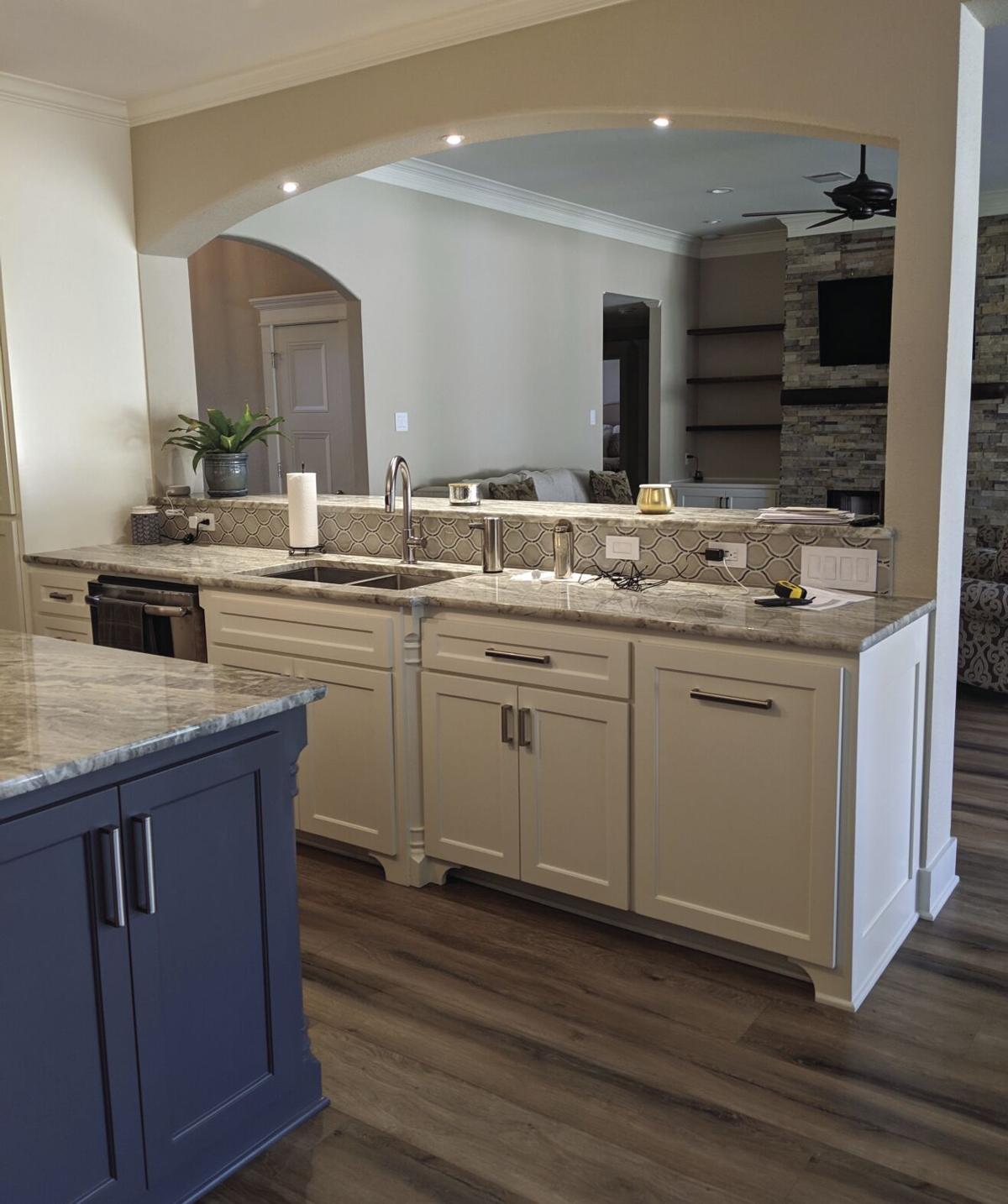 Plenty of counter space is helpful for anyone preparing a large family meal. Photo by R&R Remodeling and Construction. 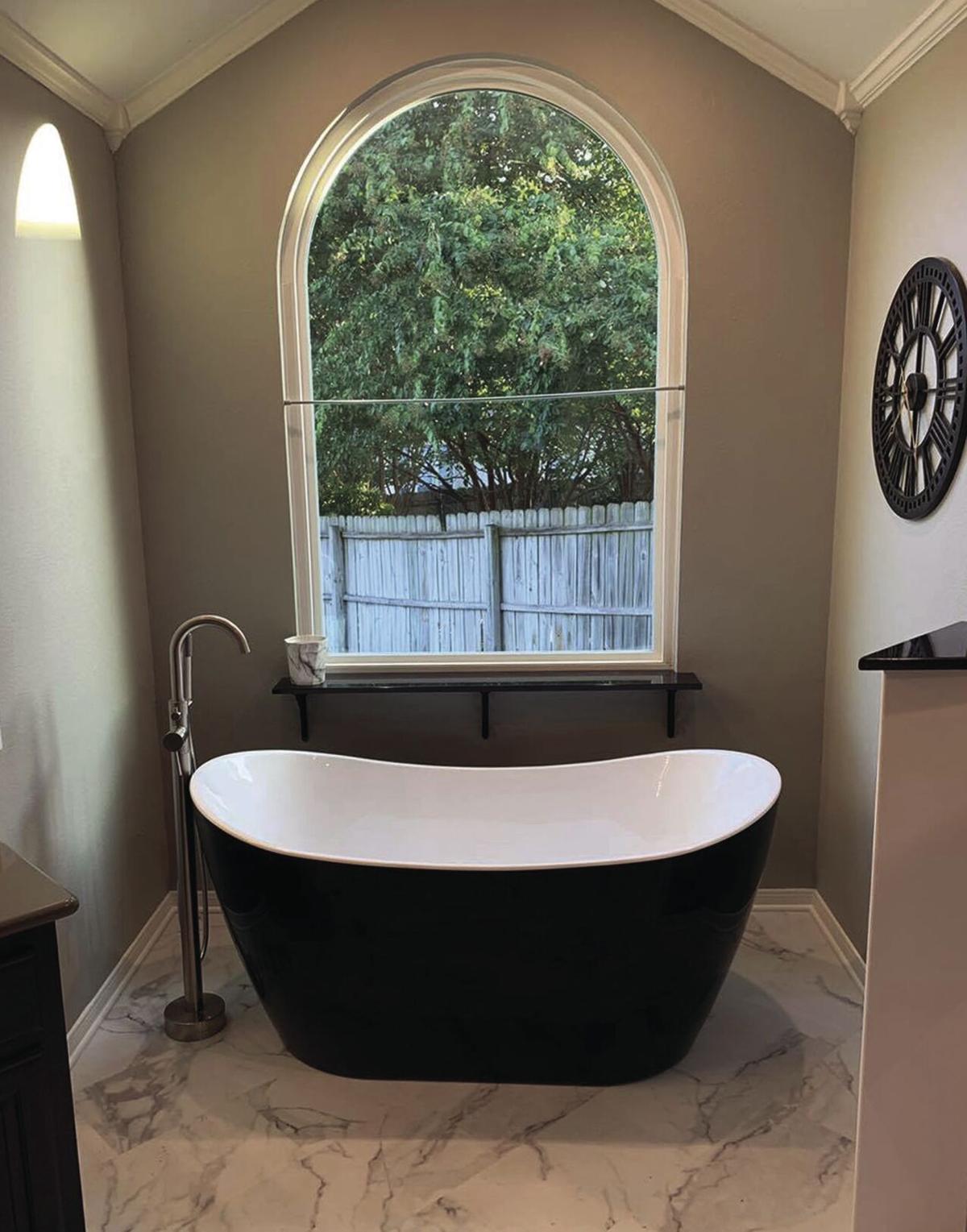 The renovation of this bathroom includes a modern and stylish take on the bathtub. Photo by Jim Williams Renovations and Roofing. 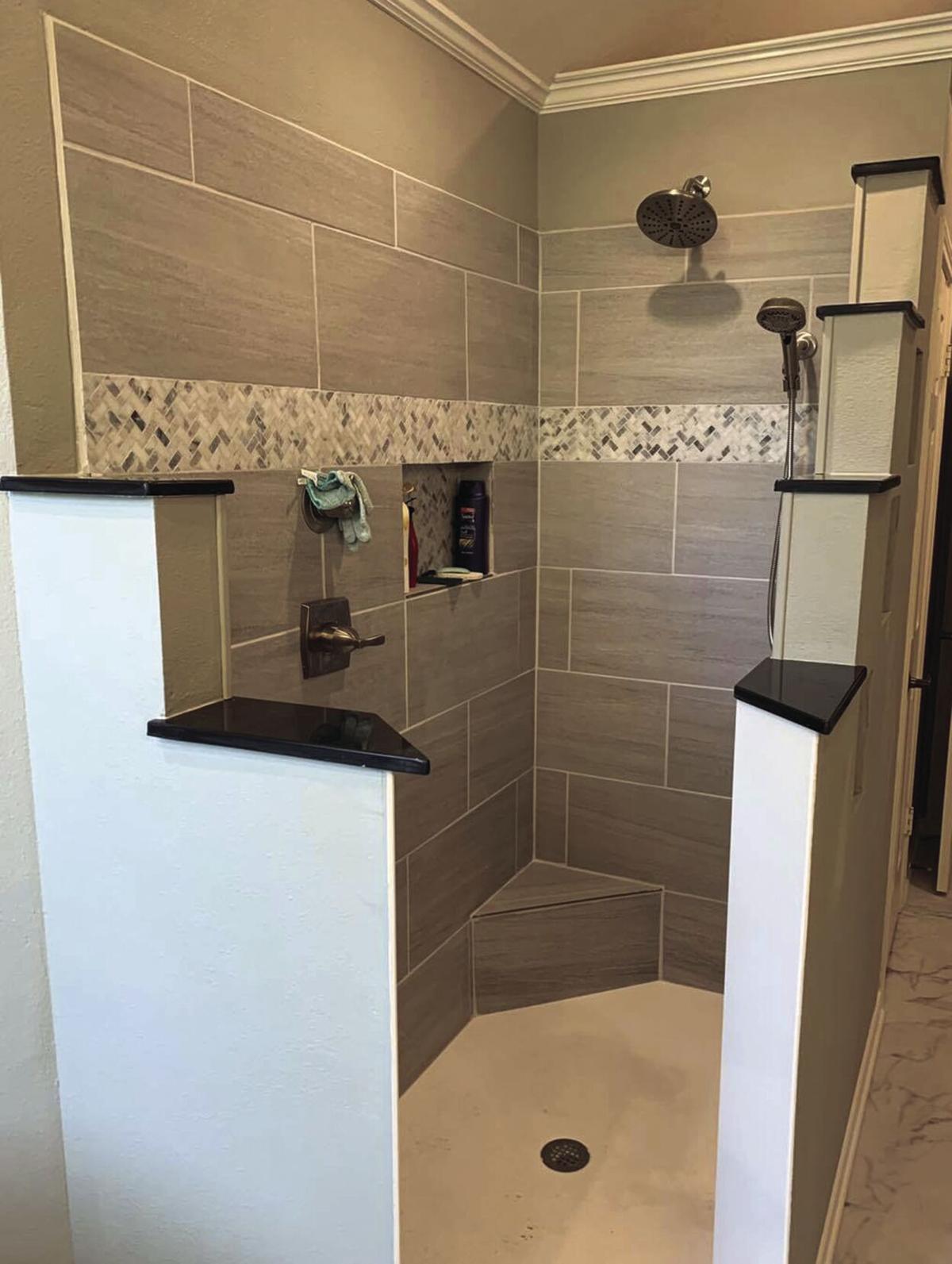 An open walk-in shower is a popular choice for bathroom renovations. Photo by Jim Williams Renovations and Roofing.