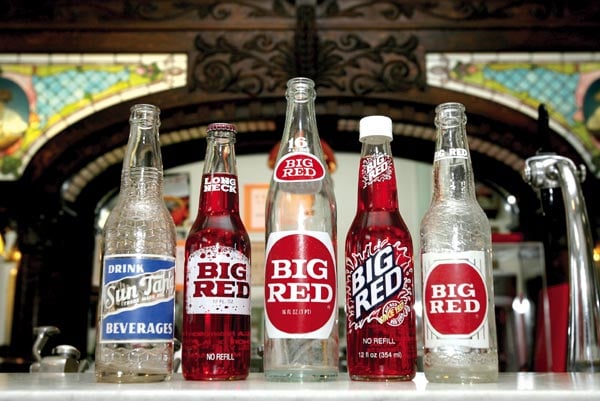 These bottles show some of the logos and designs for Big Red soda over the years, including its original name of Sun Tang Red Cream Soda (bottle at far left). The bottles are part of a collection kept at Waco’s Dr Pepper Museum. 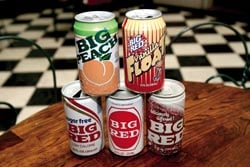 Big Red has expanded its product line over the years to include a sugar-free variety and flavors such as peach and vanilla float. 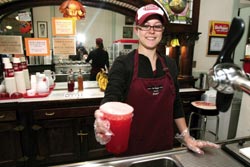 Kelsey Sterkel, a soda jerk at Waco’s Dr Pepper Museum, makes a Big Red at the fountain. The museum plans to help mark Big Red’s 75th anniversary because both drinks had their beginnings in Waco.

Thanks to its hometown museum and more than 125 years of history, just about everyone knows that Dr Pepper originated in Waco. But it’s a lesser-known fact that Waco actually gave birth to two renowned soft drinks. And the younger of the duo –– Big Red — is celebrating its 75th anniversary this year with special events and products.

Much like its Waco predecessor, Big Red has become an iconic part of Texas to many people. In his essay in a 1986 issue of Texas Monthly, writer Joe Nick Patoski began his tribute to the drink by stating, “Drinking Big Red soda pop is as much a part of growing up in Texas as souvenir chameleons at the State Fair, the first dip in the Gulf of Mexico, or a visit to the Alamo.”

Big Red traces its beginnings to Depression-era Waco. In 1937 two men — Grover C. Thomsen, a Danish-American chemist, and businessman R.H. Roark — were working at Waco’s Perfection Barber and Beauty Supply when they came up with a soft drink they originally called Sun Tang Red Cream Soda. The original markets for the drink were Texas and Kentucky.

“Mr. Roark owned the R.C. (Cola) bottler in Louisville, Kentucky, so (the new drink) started immediately in Louisville and San Antonio and grew in those areas,” said Gary Smith, CEO of Big Red Inc., whose corporate office is in Austin. “Today our second-largest market (besides Texas) is that Louisville and southern Indiana market.”

As the drink grew in popularity, executives steadily expanded its reach and changed its name –– first to Sun Tang Big Red Cream Soda in 1959 and then to Big Red in 1969. Legend has it that the current shortened name was the inspiration of Harold Jansing, a former president of the San Antonio bottling plant.

“(Jansing) was quite a golfer, and supposedly he and some friends were playing golf,” said Bill Tilghman, who worked in Waco as a Big Red senior vice president from 1979 until his retirement a few years ago. “After he paid the caddies, (Jansing) heard them say, ‘Let’s go down and get us a big red soda.’ And that’s how it came about,” Tilghman said.

“Through sweetener technology and advances in research and development, we have figured out how to make Big Red Zero Calories with no aftertaste,” Smith said. “It’s fantastic news if you’re one of those guys who want to drink a diet (soda) but don’t like the taste. This may be the answer.”

Big Red Inc. over the years also introduced additional soft drinks that brought out new flavors –– Big Peach in 1994, Big Pineapple in 2001, Big Punch and Big Red Float in 2004, and the latest, a blue creme soda called Big Blue, in 2009.

The company remained in the hands of the original inventors and their descendents until 2007, when Smith purchased it in a multimillion-dollar deal. He said annual revenues have risen from $100 million to $150 million, with Big Red now the sixth-largest soft drink in the United States.

But market share and profits alone don’t do justice to the appeal of this beloved “red soda water.” The key to Big Red seems to be centered around its distinctive flavor, but there is a fair amount of disagreement when it comes to describing just what the soft drink actually tastes like.

“It’s got a mix of lemon and orange oils that make it a very unique taste. (Because of the red color) you expect a strawberry or a really sweet juice-type drink, and that’s not the case. It is not too sweet,” Smith said.

Tilghman, who oversaw the quality control of the syrup as one of his many duties at Big Red, agreed the taste is unique. But he added that its mixture of lemon and orange oils with vanilla and other flavorings “is what gives it a bubble gummy taste, so some people call it red bubble gum liquid.”

Another former Big Red executive, past president Mark Fowler, was quoted in a 2007 interview on National Public Radio as saying, “To me, the beverage tastes like carbonated Juicy Fruit chewing gum.”

The unique taste might be just one reason why people who drink Big Red regularly can develop an almost cultlike zeal for the experience. They become not just fans, but true fanatics.

“Our consumer loyalty index is the highest among all beverages,” Smith said. “Once people start drinking Big Red and build that loyalty, they never lose it.”

A quick look at comments from some of the more than 120,000 fans of the Big Red Facebook page would seem to bear out Smith’s claim. A teenage girl writes that she has to drink either one or two liters of Big Red each day before school, because “if I don’t have it in the morning I’m cranky. No other drink can put me in a good mood all day.”

A female Facebook fan said she introduced family members living in California to Big Red 40 years ago, and since then she has had to haul cases of the drink with her when she visits them out west. Other Facebook fans enthused that Big Red’s taste is addictive, and they’re delighted to be “hooked” on it.

Even great distances and difficulty getting a regular supply of the drink can’t deter serious Big Red fans. Tilghman said that one day he received a letter from a crew member serving aboard an American aircraft carrier in the Pacific Ocean that contained an urgent request.

“The letter said there were 64 Texans on board the ship, and the writer wanted to know how they could get Big Red because all the Texans wanted some,” Tilghman said. “So we sent 20 cases of cans to them through the APO system of the Postal Service, and I got sent back to me a large photograph of the ship signed by every member of the crew.”

But is there perhaps a dark side to this bright red soda pop? Maybe. As Tilghman puts it, “People either love Big Red or they hate it –– there’s not a whole lot of middle-of-the-roaders.” This has resulted in some people knocking Big Red on its Facebook page as being sickly sweet like “pancake syrup,” or tasting like “liquid cough medicine.”

Taste aside, stories abound about the creative and unusual ways people end up using Big Red. Emery Bodnar, director of information services for the American Bottling Co. plant that bottles Big Red in San Antonio, tells this story: “One day I was checking stores, and I saw a baby crying in a shopping basket. The mother took a two-liter bottle of Big Red off the shelf, opened it, and filled the baby’s bottle with it, and gave it to the baby. The baby quit crying. Mothers wean babies on it.”

A very unscientific survey I took of friends on Facebook came up with some other novel uses. While one respondent had a similar story of a couple who filled their baby’s bottles with Big Red, another friend told of a bride and groom who toasted each other at their wedding with the drink. And an old colleague of mine who worked at a Central Texas television station wrote in that she and two other studio crew members were fond of drinking a few bottles of well-carbonated Big Red before trying to belch-speak the entire Gettysburg Address.

Big Red also seems to be of special use to sportsmen, such as Waco fishing guru Charlie Pack.

“Charlie ran an annual carp fishing contest, and so I would give him Big Red fountain syrup. Some of the fishermen would then make dough bait using that,” Tilghman said. “The teams that used the Big Red would always catch more carp than anybody else. I guess carp love it, too.”

Tilghman also knew an avid Waco deer hunter who borrowed some of the Big Red fountain syrup to conduct a field experiment.

“He put cotton balls impregnated with Big Red syrup on some –– but not all –– of his deer feeders,” Tilghman said. “He found that the feeders with the odor of Big Red would attract more deer. Vanilla is a very popular flavor with both people and creatures.”

To celebrate Big Red’s 75th anniversary, Smith said his company has already been distributing commemorative T-shirts, and is selling special glass-bottled longneck versions of the drink in all its markets during 2012. The Big Red in these glass bottles is distinctive because it contains pure cane sugar, the drink’s original sweetener, instead of high fructose corn syrup, just like the Dublin-made version of Dr Pepper.

“Big Red has been very generous to us over the years,” said Jack McKinney, Dr Pepper Museum executive director. “They gave us over $100,000 for our exhibits for our new wing. We’re probably going to do a 75th anniversary Big Red exhibit in 2012, and some of those materials we will then use in a permanent Big Red exhibit probably a couple of years down the road.”

And if you want to experience a treat enjoyed by Big Red drinkers of the past, McKinney said the museum’s soda fountain is always stocked with Big Red syrup, allowing visitors to taste a fountain version of the drink mixed up on the spot.

Donal Sharp succeeded in moving the Big Red soft drink beyond a regional draw to a product available nationally, while William Ravenscroft cre…

These bottles show some of the logos and designs for Big Red soda over the years, including its original name of Sun Tang Red Cream Soda (bottle at far left). The bottles are part of a collection kept at Waco’s Dr Pepper Museum.

Big Red has expanded its product line over the years to include a sugar-free variety and flavors such as peach and vanilla float.

Kelsey Sterkel, a soda jerk at Waco’s Dr Pepper Museum, makes a Big Red at the fountain. The museum plans to help mark Big Red’s 75th anniversary because both drinks had their beginnings in Waco.