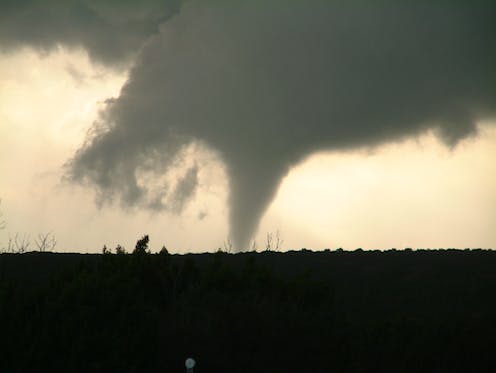 Curious Kids is a series for children of all ages. If you have a question you’d like an expert to answer, send it to curiouskidsus@theconversation.com.

What do tornadoes look like on the inside? – Madison, age 7, Noblesville, Indiana

Scientists really don’t know the answer to this question. There are no visual observations from inside of a tornado, because these storms create very violent and dangerous conditions on the ground.

If we placed cameras in the path of a tornado, they would either be damaged by the strong winds and swirling debris, or become so caked with mud and water that they wouldn’t produce any useful pictures. And of course, it’s not safe for humans to try to observe tornadoes at close range. It’s important to always seek shelter when tornado conditions develop.

We do have some ideas about the structure of the inside of tornadoes from instruments called mobile Doppler radars. Scientists can drive these instruments to locations near the tornado, but stop at a safe distance.

The radar sends energy toward the tornado, and when it hits the storm, some of the energy is bounced back. Researchers can analyze that reflected energy to detect important characteristics about the tornado. These include where there is and is not rain within the storm, where there is debris, how fast the winds are, and how these properties change moving away from the center of the tornado toward its outer edges and up vertically through the storm cloud above it.

Researchers use mobile radar to study tornadoes and other kinds of storms across the U.S.

From these radar observations, we have learned that tornadoes usually have a clear area in their centers, or at least a zone that is rain- and debris-free. This area also has intense vertical winds that sometimes are strong enough to suck pavement up from roads.

This clear space is surrounded by a ring of heavy rain and debris that is often moving outward, away from the tornado’s center. That’s because the winds are spinning incredibly fast and creating centrifugal force that pulls these objects away from the middle of the storm. Sometimes areas of heavy rain that are a little farther removed from the tornado spiral inward toward the area of rotation, like the spiral bands that extend outward from the eye of a hurricane.

Some tornadoes have only one main funnel cloud. Others have multiple small funnels that rotate around each other. There are even tornadoes that don’t have a funnel cloud at all. As long as winds are rotating in a tight circle all the way from the storm cloud down to the ground, it’s a tornado, even if atmospheric conditions haven’t condensed water vapor in the air into a visible funnel.

Scientists have also learned that many tornadoes don’t actually descend from the cloud to the ground. Rather, they form at the ground and quickly build upward — often in less than a minute.

Tornadoes can form at the ground before radar detects rotating winds at low levels.

When that happens, your eyes may fool you if you’re watching for a funnel cloud coming down from the sky. There could already be tornado-strength winds at the surface, even without that funnel cloud. So be careful — when it comes to tornadoes, looks can be deceiving.

Hello, curious kids! Do you have a question you’d like an expert to answer? Ask an adult to send your question to CuriousKidsUS@theconversation.com. Please tell us your name, age and the city where you live.

And since curiosity has no age limit — adults, let us know what you’re wondering, too. We won’t be able to answer every question, but we will do our best.

This article is republished from The Conversation under a Creative Commons license.

Waco's evening forecast: A few clouds from time to time. A stray shower or thunderstorm is possible. Low 76F. Winds NE at 5 to 10 mph. The for…

The forecast is showing a hot day in Waco. Temperatures are projected to be a quite blazing high of 94. Today has the makings of a perfect day…

The Waco area can expect a sizzling hot day. Temperatures are projected to be a quite sweltering high of 96. Today has the makings of a perfec…

The forecast is showing a hot day in Waco. Temperatures are projected to be a quite steamy high of 98. Today has the makings of a perfect day …

The forecast is showing a hot day in Waco. Temperatures are projected to be a scorcher today with temperatures reaching a high of 96 though it…

The forecast is showing a hot day in Waco. Temperatures are projected to be a scorcher today with temperatures reaching a high of 103 though i…

Waco's evening forecast: A few clouds. A stray shower or thunderstorm is possible. Low 76F. Winds SE at 10 to 15 mph. Looking ahead, the Waco …

What summer weather was like the year you were born

From 1920 to 2021, here's what summer weather was like, based on data from the National Oceanic and Atmospheric Administration.